HOME / SOCIAL/CULTURAL / Writing on the wall for Trump? 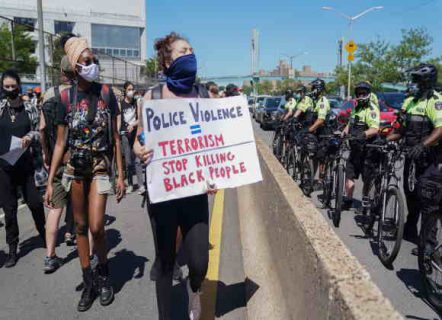 Protests and riots have continued in Minneapolis and other US cities since the killing of an unarmed African-American who was suffocated to death by white police officers after they pinned him down by the neck and ignored his pleas to stop and spare his life.

This horrific crime, filmed on a mobile phone camera, has once again brought explosively to the fore the perennial issue of the racism faced by Black Americans at the hands of the police and other state agencies. Though segregationist laws may have been abolished years ago, discrimination remains pervasive in the US and the evidence of it is everywhere. Black Americans are hugely disadvantaged economically and socially, have shorter life expectancies than their White compatriots, are much more likely to be imprisoned, and – despite a handful of notable exceptions — are grossly under-represented in government and elected institutions.

Donald Trump got to the White House by pandering to the prejudices of White racists and adopting their agenda. He incessantly vilified Barack Obama, impugned his American birth certificate and demanded he ‘go back’ to his father’s birthplace Kenya, and vituperated against immigrants and foreigners, especially Muslims. He continued doing the same in office, fueling a sharp rise in bigoted attitudes and behavior in the country that claims to be the leader of the ‘Free World’ and a paragon of liberty and equality.

It was impossible not to be outraged by the footage of the incident, which went viral over the Internet, especially when the victim George Floyd, in his final gasps before expiring, implored the officer who was kneeling on his neck to desist and allow him to breathe.

Yet Trump’s initial reaction appeared to signal support for the crime. By Tweeting “when the looting starts, the shooting starts” in response to the unrest that ensued in Minneapolis, he effectively encouraged the police and armed civilians to kill protesters.

It is no exaggeration to say that Trump is sowing the seeds for the disintegration of the United States with his thoughtless, hate-filled and bigoted diatribes and his policies that seek to appeal to the racist Whites who propelled him to power. He may not be the first occupant of the White House to be a serial liar. But he is surely the first to incite his supporters in Democrat-controlled states to mount local insurrections – against the lockdowns ordered to combat the deadly coronavirus – in the country he is supposed to be leading.

History may be repeating itself. In the 1950s, the Rosa Parks incident energized the Civil Rights Movement that succeeded, after years of struggle, to get segregation laws abolished. The George Floyd incident could trigger another anti-racist revolt against the resurgence of bigotry under Donald Trump, and put paid to his hopes for re-election to a second term.

Much of the rest of the world, frightened and disgusted in equal parts by his aggressive racism and xenophobia, is fervently hoping that may happen.

0 thoughts on “Writing on the wall for Trump?”