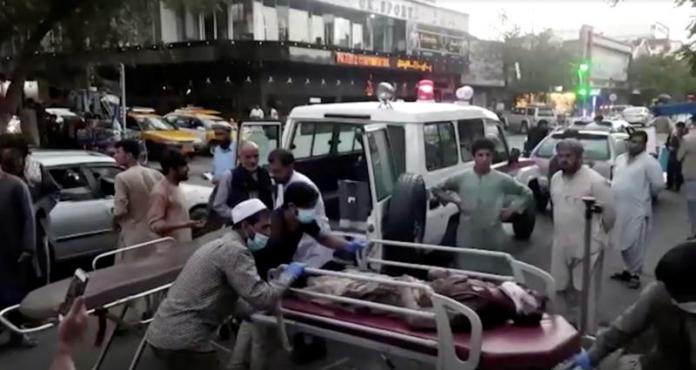 Many commentators have been portraying the precipitous American withdrawal from Afghanistan as a ‘gift’ from President Joe Biden to the Taliban, and all that has been happening at Kabul airport as a mere show whose script was agreed in advance by the two sides. But this conspiracy theory is belied by events on the ground, and the panic gripping Washington and other Western capitals about how to secure the departure of their nationals and local collaborators.

But there is a different kind of plan behind this sudden exit. Its aim is to create chaos in Afghanistan and light the fuse of civil war between the victorious Taliban and rival ethnic and sectarian components. That would lead to the country being turned into a launch-pad for extremist religious and ethnic groups to destabilise Central Asia and cause trouble in neighbouring countries, especially Iran, China and Russia.

The Taliban have not yet formally assumed power. They will not do so before the withdrawal of US sand Western forces and the evacuation of their Afghan helpers has been completed. Monday’s secret meeting in Kabul between Taliban leader Mulla Abdulghani Baradari and CIA director William Burns was aimed at ensuring their safe and unimpeded departure — after the Taliban threatened to consider them legitimate targets when the Biden administration started dragging its feet over the evacuation . The meeting may have covered other issues and reached other understandings. But the key thing about it – according to a source close to the movement — was that Mulla Baradari spoke to his American guest as a victor able to impose his terms.

The American defeat in Afghanistan was not just due to the ferocity of the resistance, the Taliban’s persistence, the huge losses sustained by the US and NATO, and their gross mismanagement of their occupation of the country. A key factor was the semi-covert involvement of Russia and Iran, especially during the past five years, who planned for and accelerated this defeat.

Western analysts assumed Iran would remain an irreconcilable enemy of the Taliban since their raid in 1996 – shortly after they seized Kabul and took power the first time – on the Iranian consulate in the city of Mazar-e-Sharif near the Iranian border, in which they killed 11 Iranian diplomats and journalists.

But times changed. According to our sources, one of the key engineers of the US defeat in Afghanistan was Gen. Qasem Soleimani, late commander of the Iranian Revolutionary Guards’ Qods Force.

Soleimani reasoned that only force that could defeat the Americans and eject them from the country was the Taliban, given their broad support among Afghanistan’s Pashtun population (around 18 million out of a total of 40 million). And they could so by inflicting casualties and material losses on them that would become unsustainable. He argued that the outrage at Mazar-e-Sharif should be forgotten for now, and channels of contacts and cooperation opened with the Taliban. He went on to assign his deputy, and later successor, Esmail Qaani, as liaison officer.

Soleimani’s role in Afghanistan may have been one reason the1 US decided to assassinate him.

At the time the Taliban were wary of American-sponsored schemes to destroy them – and they still are. Their fears were heightened when elements of the Islamic State (IS) group – which they suspected were US-backed infiltrators – were transferred to Afghanistan. This is what prompted them to turn to Tehran for assistance. The Iranians took that as an opportunity to reach a variety of agreements and understandings, over issues such as border security and procedures. They also agreed to cooperate in ending the American occupation of Afghanistan.

The instant emergence of Tajik chieftains Ahmad Masoud and Amrullah Saleh as leaders of a new anti-Taliban opposition – and their appeals for Western aid — are evidence of the US’ future plans. It wants to use ethnic, sectarian and tribal factors to tear Afghanistan apart and turn into a failed state, as it did to Syria, Iraq, and Libya and to a lesser extent Yemen, to further its geopolitical objectives.

The question to ask now is whether, or to extent, the US will heed these warlords’ requests — and supply them with money and arms, or with Islamist mujahideen transferred from Turkey and Syria.

0 thoughts on “Washington’s plans for Afghanistan”