HOME / WORLD / Why Did the Taliban Win? 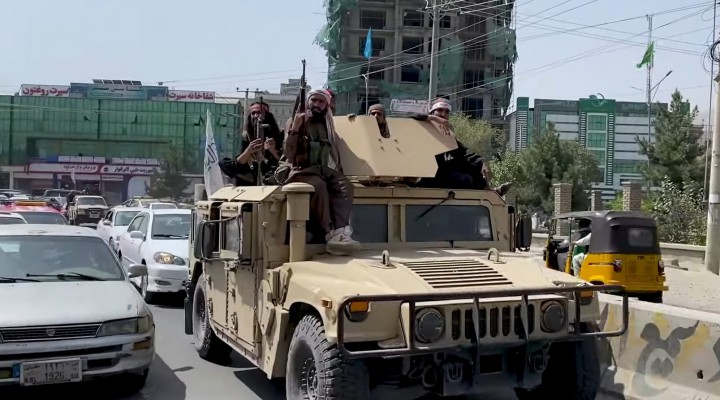 It took just a week – from August 9 to 16 – for the Taliban to conquer the first major city in Afghanistan and then the last. Everybody agrees the Taliban won. But the punditocracy does not know why.

CNN blamed the Afghan military: “Although Afghan security forces were well funded and well equipped, they put up little resistance as Taliban militants seized much of the country following the withdrawal of US troops beginning in early July.” The Diplomat placed the blame on President Ashraf Ghani and other Afghan government officials for their corruption, which destroyed their national legitimacy. Former Trump defense secretary Mark Esper blamed his old boss for “continuing to want to withdraw American forces out of Afghanistan.” Unsurprisingly, Trump has blamed Biden, calling on him to “resign in disgrace” for his handling of the situation. Fox News has likewise blamed the Biden administration for choosing to “ignore that intelligence” of the imminent Taliban take-over. Some American military planners have blamed their intel which led to overconfidence in the Afghan army. Similarly, the Wall Street Journal blamed a combination of both American and Afghan leaders: “The Taliban capitalized on mistakes by the Western coalition and its Afghan partners to recruit fighters. They harnessed popular anger at human-rights abuses, civilian deaths and corruption to turn Afghans against the central government and its foreign backers.”

Such reactions are mostly to be expected. After the Bay of Pigs, President Kennedy memorably remarked that “victory has 100 fathers and defeat is an orphan.” In all the pandemonium of coverage since the fall of Kabul, however, one omission is glaring—the Taliban is seldom credited for its victory. As H.R. McMaster exemplified in a recent podcast, “The Taliban didn’t defeat us. We defeated ourselves.” In her influential substack, Bari Weiss “asked some of the most thoughtful people” on the subject, from Eli Lake to Justin Amash, for explanation, and none attributed Taliban’s successes to the Taliban.

This assessment is at odds with my longtime research on militant group dynamics. For almost two decades, I have researched a simple question – why some militant groups politically succeed while others fail. For example, why did Hezbollah manage to coerce American and French forces out of southern Lebanon in the early 1980s whereas the Armed Islamic Group failed in the following decade to establish Sharia law in Algeria? To explain variation in the political achievements of militant groups, I have carefully studied hundreds from all over the world to tease out which decisions by their leaderships are most likely to result in realizing their political platforms. It turns out there is, in fact, a science to victory in militant history. But even rebels must follow rules.

In Rules for Rebels: The Science of Victory in Militant History, I demonstrate that smart militant leaders follow three simple rules that elevate the odds of political success:

On the surface, the Taliban may appear an unlikely exemplar for observing these rules for rebels. After all, the Taliban is notorious not for its moderation, but its extreme treatment of the population. A greater familiarity with the group, however, reveals the strategic logic of the leadership which accounts, at least in part, for such rapid territorial gains.

For starters, the Taliban leadership has known for a very long time about the political risks of civilian attacks. Mullah Mohammed Omar, spiritual head and chief strategist of the Taliban from 1996 to 2013, would emphasize in public statements: “The mujahedeen have to take every step to protect the lives and wealth of ordinary people.” It is tempting to dismiss this position as mere propaganda. But the leadership’s proscription against harming civilians has been at the core of the “Code of Conduct” issued to Taliban members since the first “Layeha” of 2006. Rule 21 states, “Anyone who has killed civilians during the Jihad may not be accepted into the Taliban movement.” In the 2009 Layeha, Rule 41 reminds foot soldiers to “avoid civilian casualties”; Rule 48 bans “cutting noses, lips, and ears off people”; and Rule 59 mandates that “the Mujahidin must have a good relationship with all the tribal community and with the local people.” In the 2010 Layeha, Rule 57 decrees, “In carrying out martyrdom operations, take great efforts to avoid casualties among the common people”; Rule 65 enjoins Mujahidin to “be careful with regard to the lives of the common people and their property”; and the back cover stresses that “taking care of public property and the lives and property of the people is considered one of the main responsibilities of a Mujahed.” According to the 2012 Taliban Leadership Council, the only permissible targets are selective ones: “foreign invaders, their advisors, their contractors and members of all associated military, intelligence and auxiliary departments. And similarly, the high-ranking officials of the stooge Kabul regime; members of Parliament; those associated with Ministries of Defense, Intelligence and Interior.” Similarly, in the 2010 Layeha, Rule 5 directs operatives to attack “high-ranking government officials,” while Rule 41 demands the target of suicide bombers to be “high valued.” Clearly, Taliban leaders have known for awhile about the limitations of indiscriminate attacks against civilians.

To protect Afghan civilians, Taliban leaders have often incentivized their members to steer clear of civilians by introducing independent commissions of “neutral observers and judges” across Afghanistan to facilitate formal complaints about targeting violations. The leadership has also distributed phone numbers for anonymous complaints, leading to numerous cases in which offending members were expelled from the Taliban, stripped of their position, disarmed, imprisoned, or publicly rebuked. When high-level commanders are found guilty of civilian targeting, they may be subjected to punishment under Sharia law. A United Nations report affirms that Taliban leaders reduce “casualties among the common people” by “implementing guidance in the Layeha to target military objects more carefully.”

The Taliban has also been wise to avoid targeting American civilians in the U.S. homeland. This is a group that has largely restricted violence to its own region of the world, particularly Afghanistan. And when the Taliban has struck civilians, the perpetrators are typically lower-level members of the group acting in defiance of leadership targeting preferences. Within the Taliban, lower-level members indeed perpetrate the lion’s share of indiscriminate violence. General John R. Allen, who commanded the American-led coalition, confirms that rogue operatives “were the ones who were planning the roadside bombs and intentionally targeting civilian targets” seemingly “isolated from more senior Taliban leadership.”

The discrepancy between their targeting guidelines and practices is often ascribed to principal agency problems within the organization. Writing in Foreign Policy in 2011, Kate Clark attributes many civilian attacks to the fact that “The Taliban has severe command and control problems within its ranks.” The International Crisis Group likewise emphasizes how the leadership “has struggled to exert authority over its field commanders,” and that “given the autonomy that Taliban commanders and allied networks enjoy, the leadership might exercise little control over every-day military operations.” Taliban’s difficulties with command and control are rooted in its “open door” recruitment policy, which has historically admitted fighters with weaker abilities and organizational commitment. Compared to their leaders, these lower-level members are generally incompetent, inexperienced, negligent, and undisciplined fighters.

Although unable to fully control which targets their operatives strike, Taliban leaders can usually determine which attacks are claimed by the organization. Indeed, my research with Justin Conrad statistically demonstrates that Taliban leaders are significantly less likely to claim organizational credit when operatives strike civilian targets as opposed to military ones in order to present a more moderate image. The leadership eagerly assumes Taliban responsibility for selective attacks against military targets, but veils organizational involvement when operatives commit indiscriminate bloodshed. For instance, the Taliban “quickly claimed responsibility” when operatives ambushed Mohammad Qasim Fahim, leader of the alliance that toppled the Taliban in 2001, on a road in northern Kunduz in July 2009. By contrast, the leadership released the following statement when operatives defied its orders by striking the International Committee of the Red Cross in Jalalabad: “The Islamic Emirate of Afghanistan wants to clarify to everyone that it was neither behind the May 29th attack on the I.C.R.C. office in Jalalabad city nor does it support such attacks.”

In these ways, the Taliban leadership has historically exhibited a sophisticated understanding of militancy, which has helped the group to gain local recruits and retain regional allies without provoking the kind of massive, international counterterrorism response that destroyed the Islamic State caliphate in Syria.

Earlier this week, Suhail Shahee gave a lengthy interview with NPR in which the Taliban spokesman based in Qatar promised to oppose terrorist attacks against the American homeland and to punish operatives who attack Afghan civilians. Like many journalists of late, the interviewer asked the Taliban leader whether it was true that “your group has changed.” But those who have been studying the Taliban for many years know that there is nothing new about its leadership presenting a moderate face. This is the untold story of how the Taliban has managed to gain so much control over Afghanistan.

0 thoughts on “Why Did the Taliban Win?”