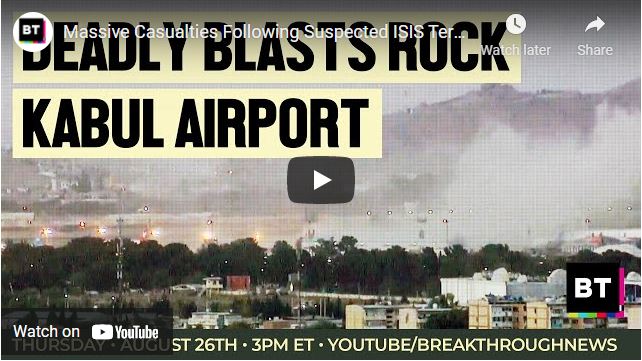 Explosions rocked the Kabul, Afghanistan airport just a week after the Taliban took the city as the US military acknowledged defeat in a 20-year war. What is happening and what is the context for the Taliban takeover of the country?

Hear from Ann Wright, US Army Colonel & State Department official in Afghanistan who resigned in protest of the invasion of Iraq and became an anti-war activist.

Indigenous leaders are fighting back against the Line 3 pipeline project that would violate treaty territory of Anishinaabe peoples in Minnesota. Protestors have faced horrendous abuse by police agencies for fighting back, including tear gas, rubber-coated steel bullets, and pepper bullets.

Line 3 leader Tara Houska joins The Freedom Side LIVE to describe just what’s happening and what they’re fighting for. Tara is also founder of the Giniw Collective, a tribal attorney, and a Couchiching First Nation citizen.

Workers at Nabisco plants and facilities around the country are on strike.

Federal pandemic benefits are expiring soon, but workers are still laid off, making less, and endangering their health to go into work as the Delta variant rages.

Peruvian President Pedro Castillo, a socialist, is facing an ongoing coup against the democratically elected government.

Denis Rogatyuk, international editor for El Ciudadano media and Jacobin America Latina, writer & journalist, joins The Freedom Side to update us on what’s going on and how we should fight back.

“The US just froze the treasury assets of Afghanistan, impacting its ability to import basic necessities like medical equipment and medicines. There’s already been a call I’ve seen about shortages in hospitals in Afghanistan.”

“The only way the media knows how to cover anything is Trump / anti-Trump. He’s not even president anymore. The damage that was done to the national conversation in the Trump and post-Trump era has been extremely devastating for activists.” @RaniaKhalek

“The media still has Trump derangement syndrome. He’s not even in the public eye anymore, but they are still obsessed with him. Every late night show it’s all about Trump.” @RaniaKhalek

“It’s interesting to see that people in the West are reacting in imperial fashion as the U.S. occupation leaves Afghanistan. They can’t get over it, they can’t get over the fact the U.S. is leaving. Europe is freaking out about this as well.” @RaniaKhalek

“Since the Taliban took over Kabul, people were scared because of the history of the Taliban being horrible. It is interesting that they have shown a level of restraint that I don’t think people were prepared for. It’s still early to tell.” @RaniaKhalek