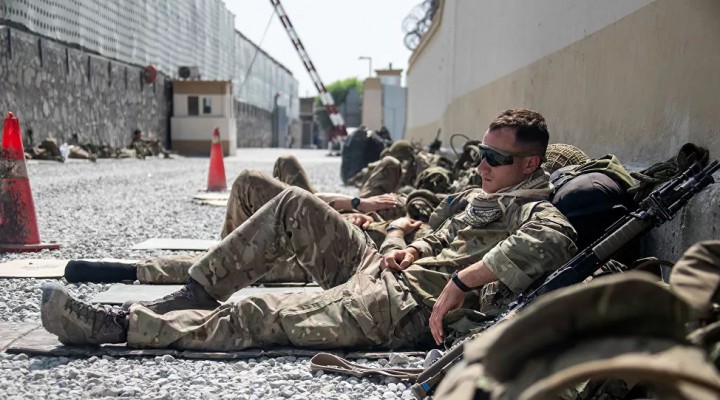 Just when the eyes of the world are watching a shambolic and shameful scramble out of Afghanistan by the United States and its British ally then we get this dramatic terror warning.

Media reports say the US, Britain, Australia and New Zealand issued “very specific” and “near-identically” worded warnings for throngs of people to disperse from the airport in Kabul, the Afghan capital.

The four allies are members of the so-called Five Eyes intelligence grouping which also includes Canada. That indicates a coordinated messaging by those governments.

The warning claims that a little-known Islamist terror group, Isis-K, is planning to “imminently” hit the airport entrances with suicide bombs. The group is distinct from the dominant Taliban* militants.

Consequently, the US and its allies are urging people to immediately vacate the area around the airport. Curiously, all entrance gates to the airport are mentioned as high-risk areas.

Further to the grim warning, Britain’s military minister Ben Wallace advises people milling around Kabul airport: “Head for the border,” according to a front-page report in the Guardian. “If they think they can make it to a third country, that may be a better option,” said Wallace. Meaning, a better option than being airlifted out of Kabul by Britain’s Royal Air Force.

The suspicion is that the alleged terror threat is all too convenient. The American and British governments are looking like callous fools from the debacle of their military retreat from Afghanistan. After 20 years of waging a criminal, futile war in the country, Washington and London are scurrying like rats off a sinking ship. The regime they propped in Kabul with billions of dollars and weaponry has fallen like a house of cards to the Taliban insurgents who swept into the capital on August 15, taking control of the country.

What’s making the retreat look even more shameful is the chaotic scenes at Kabul airport where the US and Britain are struggling to get their remaining citizens and Afghan aides out of the country ahead of the August 31 deadline next week when the last of American and British troops have been ordered out by the Taliban victors.

It is estimated that there are as many as 1,500 US citizens still trapped in Afghanistan. Britain is saying there are as many Afghan interpreters and others who assisted the British military occupation and who are eligible for evacuation.

That means come next week there are going to be even more ignominious scenes of thousands of American and British collaborators left stranded in Kabul as the last of the military cargo planes take off. It will be potentially an epic PR disaster for Washington and London.

Hence the suspicious terror warning put out by the Americans and British and amplified by their Five Eyes partners, Australia and New Zealand. The purpose seems to be: disperse the abandoned and desperate throngs whose image would otherwise create a searing global image of betrayal.

Things do not add up in the official warning. For a start, the Isis-K group is not known as a credible terror outfit. Secondly, in another context, US President Joe Biden recently said that Isis-K was the “sworn enemy” of the Taliban. Thirdly, we are told that the Taliban have “ring-fenced” the perimeter around Kabul airport with checkpoints to stop Afghans from reaching the area. So, if the area is so tightly controlled by the Taliban, how is their “sworn enemy” Isis-K supposed to mount a suicide bomb attack?

Having said that, a horrific bombing could be carried out by some unknown agency (the CIA, MI6?) in order to “substantiate” the terror warning.

Another dubious point is this: the Western intelligence agencies are supposed to now have “very specific” information on an imminent terror attack. But these same agencies did not have information warning of the Fall of Kabul when the Taliban ousted the Western-backed regime on August 15.

British minister Ben Wallace’s advice to Afghans to leave Kabul and “head to the border” to escape through neighboring countries is another telling part of the cynical calculation. In other words, he’s saying, get lost in the deserts and mountains far away from the world’s eyes… and, do us a final favor chaps, just go away and die somewhere remote and anonymous.

0 thoughts on “Terror Warning in Kabul to Avoid US, UK Shame?”