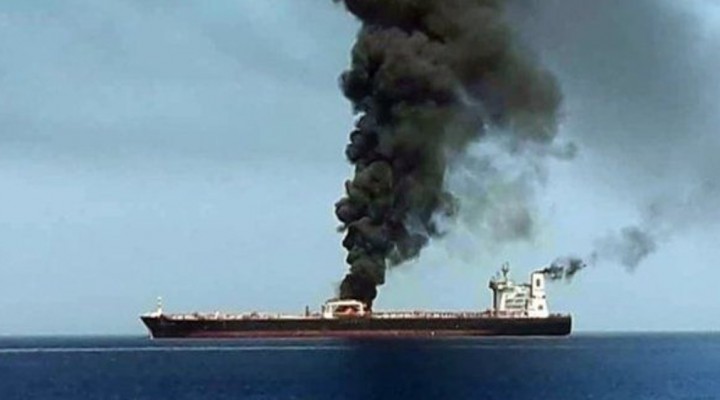 If Israel’s accusation that Iran was behind last week’s drone attack on an Israeli tanker off the coast of Oman is correct, that means Iran is out to impose a new equation of deterrence. Its terms : ‘Whenever you hit us, we will hit you back, including your ships on the open seas. You have been warned.”

This was virtually confirmed when the official al-Aalam TV channel — quoting the Revolutionary Guard Corps (IRCG), which the Americans and Israelis are convinced was responsible – said the attack was in retaliation for Israel’s air raid on al-Daba air base in Syria in which an IRCG officer was killed and four Hezbollah fighters injured, two of them critically.

Lebanese sources close to the IRCG told this paper the reason the Iranians felt compelled to retaliate quickly and forcefully was that the Israeli warplanes targeted living quarters at the base, rather than weapons stores or runways as they usually do.

This “unprecedented” response, according to the same sources, signals the adoption of a new strategy by Iran based on taking the initiative and retaliating rapidly to Israeli attacks. The raid on the tanker was carried out in two stages. First a regular drone was sent to fire missiles at the ship. But they inflicted little damage, so a suicide drone was despatched to attack the vessel’s bridge with the aim of inflicting casualties. A British security guard and Romanian crew member were killed, making them the first fatalities of the ongoing ‘shipping war’.

Israel’s foreign minister pledged a harsh Israeli response to the attack, and the Israeli media say the air force has already selected the Iranian targets to be hit and is merely awaiting the go-ahead. This is far from certain. If it had been, why did the Israelis take the issue to the UN Security Council where they know that Russian and Chinese vetoes await them?

Israel stands to be the loser either way. If it swallows the insult and fails to reply it will have conceded defeat in this battle. And if it responds with a military assault, it will provide the Iranians with the pretext to unleash the fires of hell against it. Iranian retaliation plans are ready to be put into action, and the days of waiting for the right time and place – despite a succession of Israeli attacks on Iranian targets inside and outside the country — are over.

Israel has a far larger commercial fleet than Iran and 90% of its imports are transported by sea. Much of that freight sails through the Arabian and Red seas, within range of Iranian drones, providing them with a rich bank of targets. Even if Israeli shipping is provided with US naval escorts, this would be a costly undertaking of limited efficacy.

Iran, in contrast, only exports a small amount of oil and imports very little due to the draconian US and European sanctions it is under and its growing self-reliance.

The attack on the tanker Mercer Street, owned by a company linked to the Israeli billionaire Eyal Ofer, indicates that the IRGC is taking the initiative itself – as it did when it rocketed the US base at Ain al-Asad in Iraq to retaliate for the assassination of Gen. Qasem Soleimani. It is taking the battle to the open seas and could also carry it into the Israeli interior, no longer relying on allied armed groups such as Ansarullah in Yemen, Hezbollah in Lebanon, the Hashd ash-Shaabi in Iraq, or Hamas and Islamic Jihad in the Gaza Strip.

The IRCG sent a powerful message to the Israelis in this regard during their latest assault on Gaza. A long-range reconnaissance drone was sent to the vicinity and was filmed. The implication was that if Iranian drones can reach as far as Gaza, they can also hit Israeli coastal infrastructure.

0 thoughts on “The ‘shipping war’ escalates”