HOME / WORLD / Syria must change to pull through 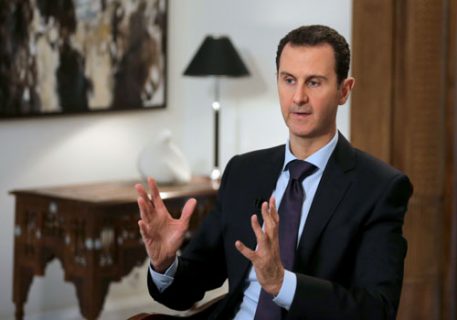 Asad mulls reforms to tackle an economic crisis worsened by new US sanctions, but can he deliver this time?

Syrian President Bashar al-Asad was expected to deliver a speech this week to discuss the deteriorating economic situation that is causing immense hardship to millions of Syrians and has sparked a number of anti-government protests. Reports suggested he would seek to dispel various rumours that have been circulating and exacerbating the economic crisis, and link it to the ‘pychological warfare’ being waged against the country as it braces for the full impact of the so-called ‘Caesar Act’.

But instead of making a public address, Asad released a letter he wrote to members of the ruling Baath Party ahead of the parliamentary elections scheduled for 19 July. It is not clear why he chose this method of communication. But it does seem clear, or can be inferred by reading between the lines of the letter, that he wants to bring about major changes in the way the country is run. It can only be hoped that these will prove more radical, sustained and profound than similar reforms promised in the past.

Asad engaged in some rare ‘self-criticism’ when he admitted in the letter that the Baath Party had made “mistakes” at some stages during its decades in power. He went further, identifying the key problem by saying these “mistakes” were caused by the “exclusion of capable party members from their right and duty to contest elections or contribute to determining the leadership of the state’s elected national institutions.”

This came just days after he sacked Prime Minister Adel Khamees in response to worsening economic conditions and replaced him with Water Resources Minister Hussein Arnous — and just days before draconian new US sanctions come into force under the Caesar Act. Asad seemed to be signalling that this was the first of many changes that would be made to cope with all the new challenges Syria is about to face.

Many would agree that the “mistakes” he mentioned were caused by the empowerment, whether within the ruling party or the state, of go-getting, toadying and corrupt individuals, and their elevation to key leadership positions at the expense of honest, capable and committed people. This was best illustrated at the start of the Syrian crisis nine years ago, when many such persons — with purely opportunistic motives of personal gain and advantage — abruptly abandoned their declared convictions and commitments and switched sides to join the opposition. They included former and serving ministers and ambassadors, senior figures in the military and security establishments, and relatives of regime insiders. Some of them waited to be paid up-front before defecting.

Nevertheless, to admit to a mistake is a virtue, and better late than never.

Together with the continuing nine-year war and the coronavirus pandemic, the current economic crisis presents the Syrian state with the most serious challenge it has ever faced. Its causes are numerous, but the main immediate one is the imminent application of the Caesar Act and a harsh new US sanctions package designed to prevent Syria’s reconstruction and starve its people into submission.

The resulting collapse in the value of the national currency has been steadied in recent days by the application of strong-arm measures against speculators and some businessmen — most of them considered close to the regime – and the confiscation of hundreds of millions of dollars worth of their ill-gotten gains. But little will be achieved if the corrupt tycoons whose wings are being clipped are merely supplanted by others who operate in similar ways. Uprooting entrenched and institutionalized corruption is a precondition if Syria is to make progress and start recovering.

Most of Syria’s business oligarchs accumulated their fortunes due to corruption, the protection of the state or state officials, and endemic cronyism coupled with feigned ‘loyalty’. It is high time for them to give back the millions they plundered from state coffers and the pockets of the Syrian people, an estimated 80% of whom are now sinking beneath the poverty line, and demonstrate true loyalty to their country.

Syrians have put up with enormous suffering in the past several years. They are owed their due by their government and leadership. Despite everything, the majority remained committed to the unity of their country’s territory and people, purely out of conviction and asking nothing in return. There is no shortage of ‘non-Baathist” talent and know-how in Syria, and it too should be propelled to the front ranks.

The regime deserves credit for resisting and all but defeating a lavishly-funded multinational conspiracy aimed at dismembering Syria and pitting its people against each other.

It is surely capable of overcoming the ordeal entirely. But only if it presses ahead with domestic reforms, conducts more self-critical re-evaluation, holds the corrupt to account, and nurtures a spirit of reconciliation, forgiveness and coexistence. That, in whole and in part, is where the road to real reform lies.

0 thoughts on “Syria must change to pull through”