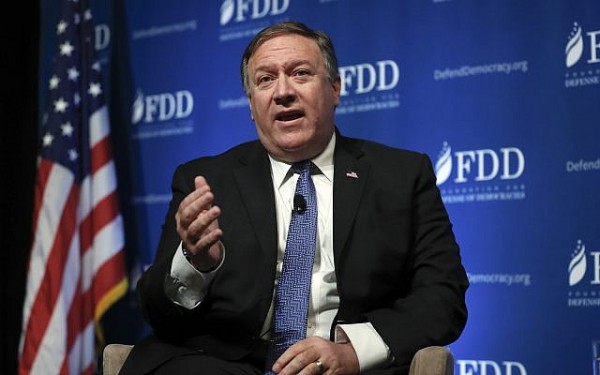 Iran and Syria again on the receiving end of sanctions

One of the most disturbing aspects of American foreign policy since 9/11 has been the assumption that decisions made by the United States are binding on the rest of the world, best exemplified by President George W. Bush’s warning that “there was a new sheriff in town.” Apart from time of war, no other nation has ever sought to prevent other nations from trading with each other, nor has any government sought to punish foreigners using sanctions with the cynical arrogance demonstrated by Secretary of State Mike Pompeo. The United States uniquely seeks to penalize other sovereign countries for alleged crimes that did not occur in the U.S. and that did not involve American citizens, while also insisting that all nations must comply with whatever penalties are meted out by Washington. At the same time, it demonstrates its own hypocrisy by claiming sovereign immunity whenever foreigners or even American citizens seek to use the courts to hold it accountable for its many crimes.

The conceit by the United States that it is the acknowledged judge, jury and executioner in policing the international community began in the post-World War 2 environment, when hubristic American presidents began referring to themselves as “leaders of the free world.” This pretense received legislative and judicial backing with passage of the Anti-Terrorism Act of 1987 (ATA) as amended in 1992 plus subsequent related legislation, to include the Justice Against Sponsors of Terrorism Act of 2016 (JASTA). The body of legislation can be used to obtain civil judgments against alleged terrorists for attacks carried out anywhere in the world and can be employed to punish governments, international organizations and even corporations that are perceived to be supportive of terrorists, even indirectly or unknowingly. Plaintiffs are able to sue for injuries to their “person, property, or business” and have ten years to bring a claim.

Sometimes the connections and level of proof required by a U.S. court to take action are tenuous, and that is being polite. Suits currently can claim secondary liability for third parties, including banks and large corporations, under “material support” of terrorism statutes. This includes “aiding and abetting” liability as well as providing “services” to any group that the United States considers to be terrorist, even if the terrorist label is dubious and/or if that support is inadvertent.

The ability to sue in American courts for redress of either real or imaginary crimes has led to the creation of a lawfare culture in which lawyers representing a particular cause seek to bankrupt an opponent through both legal expenses and damages. To no one’s surprise, Israel is a major litigator against entities that it disapproves of. The Israeli government has even created and supports an organization called Shurat HaDin, which describes on its website how it uses the law to bankrupt opponents.

The Federal Court for the Southern District of Manhattan has become the clearing house for suing the pants off of any number of foreign governments and individuals with virtually no requirement that the suit have any merit beyond claims of “terrorism.” In February 2015, a lawsuit initiated by Shurat HaDin led to the conviction of the Palestinian Authority and the Palestine Liberation Organization of liability for terrorist attacks in Israel between 2000 and 2004. The New York Federal jury awarded damages of $218.5 million, but under a special feature of the Anti-Terrorism Act the award was automatically tripled to $655.5 million. Shurat HaDin claimed sanctimoniously that it was “bankrupting terror.”

The most recent legal victory for Israel and its friends occurred in a federal district court in the District of Columbia on June 1st, where Syria and Iran were held to be liable for the killing of American citizens in Palestinian terrorist attacks that have taken place in Israel. Judge Randolph D. Moss ruled that Americans wounded and killed in seven attacks carried out by Palestinians inside the Jewish state were eligible for damages from Iran and Syria because they provided “material support” to militant groups Hamas and Palestinian Islamic Jihad. The court will at a future date determine the amount of the actual damages.

It should be observed that the alleged crime took place in a foreign country, Israel, and the attribution of blame came from Israeli official sources. Also, there was no actual evidence that Syria and Iran were in any way actively involved in planning or directly enabling the claimed attacks, which is why the expression “material support,” which is extremely elastic, was used. In this case, both Damascus and Tehran are definitely guilty as charged in recognizing and having contact with the Palestinian resistance organizations though it has never been credibly asserted that they have any influence over their actions. Syria and Iran were, in fact, not represented in the proceedings, a normal practice as neither country has diplomatic representation in the U.S. and the chances of a fair hearing given the existing legislation have proven to be remote.

And one might well ask if the legislation can be used against Israel, with American citizens killed by the Israelis (Rachel Corrie, Furkan Dogan) being able to sue the Jewish state’s government for compensation and damages. Nope. U.S. courts have ruled in similar cases that Israel’s army and police are not terrorist organizations, nor do they materially support terrorists, so the United States’ judicial system has no jurisdiction to try them. That result should surprise no one as the legislation was designed to specifically target Muslims and Muslim groups.

In any event, the current court ruling which might total hundreds of millions of dollars could prove to be difficult to collect due to the fact that both Syria and Iran have little in the way of remaining assets in the U.S. In previous similar suits, most notably in June 2017, a jury deliberated for one day before delivering a guilty verdict against two Iranian foundations for violation of U.S. sanctions, allowing a federal court to authorize the U.S. government seizure of a skyscraper in Midtown Manhattan. It was the largest terrorism-related civil forfeiture in United States history. The presiding judge decided to distribute proceeds from the building’s sale, nearly $1 billion, to the families of victims of terrorism, including the September 11th attacks. The court ruled that Iran had some culpability for the 9/11 attacks solely based on its status as a State Department listed state sponsor of terrorism, even though the court could not demonstrate that Iran was in any way directly involved.

A second court case involved Syria, ruling that Damascus was liable for the targeting and killing of an American journalist who was in an active war zone covering the shelling of a rebel held area of Homs in 2012. The court awarded $302.5 million to the family of the journalist, Marie Colvin. In her ruling, Judge Amy Berman Jackson cited “Syria’s longstanding policy of violence” seeking “to intimidate journalists” and “suppress dissent.” A so-called human rights group funded by the U.S. and other governments called the Center for Justice and Accountability based its argument, as in the case of Iran, on relying on the designation of Damascus as a state sponsor of terrorism. The judge believed that the evidence presented was “credible and convincing.”

Another American gift to international jurisprudence has been the Magnitsky Act of 2012, a product of the feel-good enthusiasm of the Barack Obama Administration. It was based on a narrative regarding what went on in Russia under the clueless Boris Yeltsin and his nationalist successor Vladimir Putin that was peddled by one Bill Browder, who many believe to have been a major player in the looting of the former Soviet Union. It was claimed by Browder and his accomplices in the media that the Russian government had been complicit in the arrest, torture and killing of one Sergei Magnitsky, an accountant turned whistleblower working for Browder. Almost every aspect of the story has been challenged, but it was completely bought into by the Congress and White House and led to sanctions on the Russians who were allegedly involved despite Moscow’s complaints that the U.S. had no legal right to interfere in its internal affairs relating to a Russian citizen.

Worse still, the Magnitsky Act has been broadened and is now the Global Magnitsky Human Rights Accountability Act of 2017. It is being used to sanction and otherwise punish alleged “human rights abusers” in other countries and has a very low bar for establishing credibility. It was most recently used in the Jamal Khashoggi case, in which the U.S. sanctioned the alleged killers of the Saudi dissident journalist even though no one had actually been arrested or convicted of any crime.

The long-established principle that Washington should respect the sovereignty of other states even when it disagrees with their internal or foreign policies has effectively been abandoned. And, as if things were not bad enough, some recent legislation virtually guarantees that in the near future the United States will be doing still more to interfere in and destabilize much of the world. Congress passed and President Trump has signed the Elie Wiesel Genocide and Atrocities Prevention Act, which seeks to improve Washington’s response to mass killings. The prevention of genocide and mass murder is now a part of American national security agenda. There will be a Mass Atrocity Task Force and State Department officers will receive training to sensitize them to impending genocide, though presumably the new program will not apply to the Palestinians as the law’s namesake never was troubled by their suppression and killing by the state of Israel.