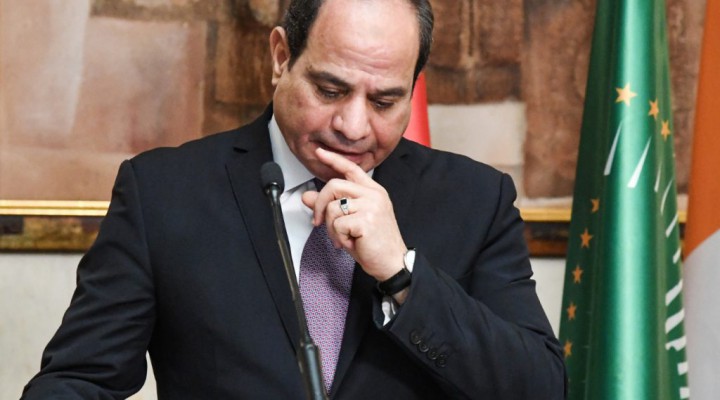 While celebrating a resolution of the Suez Canal blockage crisis, Egyptian President Sissi has made his clearest threat to go to war over the Ethiopian Renaissance Dam project

Egyptian President Sissi has made his clearest threat so far that he will not idly stand by if Addis Ababa begins filling the Nile river Renaissance Dam reservoir in July without Egypt and Sudan’s agreement, notes the editor-in-chief of a pan-Arab news portal. His readiness to go to war has been backed by military moves on the ground, and he has the full support of his people and is riding high after solving the Suez Canal blockage without external help and resolving the Libyan crisis to Egypt’s satisfaction. Faced with an existential threat, both Sudan and Egypt are now on the same page against an Israeli-backed and intransigent Ethiopia.

SURPRISING STATEMENTS: “President ‘Abdelfattah al-Sissi’s surprising statements at a press conference held yesterday (Tuesday) at the Suez Canal Authority in Ismailia before freeing the huge container ship that blocked the canal for six days amount to a ‘declaration of war’, and maybe his final warning to Ethiopia, which seems determined to proceed with Phase II of the Renaissance Dam reservoir filling process scheduled to begin in July without any agreement with Egypt and Sudan,” maintains.

President Sissi warned that ‘Egypt’s reach is long, and no one should imagine this outside our capabilities… Egypt’s waters are untouchable, doing so is a red line, and if touched we will respond by doing something that affects the region’s stability, during his remarks on a topic with no direct relevance to the [container] occasion at hand.

This is the first time since Egypt and Sudan began negotiations with Ethiopia to reach a ‘peaceful’ agreement on filling the Renaissance Dam’s reservoirs that the Egyptian president resorts to such a strong menacing tone and asserts that no one will be permitted to ‘take a single drop of water belonging to Egypt, or else the region will witness instability beyond imagination’. These words can only be interpreted as ‘this means war’, because there is no other means of achieving instability except by lighting its fuse.

There are four key reasons for the Egyptian president to make an explicit threat, after years of turning to diplomacy and banking on African and U.S. mediation, all of which collapsed in the face of Ethiopia’s stubbornness:

First: Ethiopia informed the U.S. via Special Envoy to Sudan Donald Booth of its firm decision to move forward with Phase II of the Renaissance Dam reservoir filling process scheduled for July, which Ethiopian PM Abiy Ahmed confirmed in remarks to parliament.

Second: Director General Bashir ‘Abdelrahim of the Job Creation and Enterprise Development Agency in Ethiopia’s Benishangul-Gumuz region announced that an operation to clear vegetation is underway to facilitate Phase II of the Renaissance Dam filling process, at a cost of up to 81 million Ethiopian birr ($2m), and that the operation to clear 4,854 hectares of land will be completed ‘within a month’.

Third: Sudan has begun emptying the Jebel Aulia Dam reservoir South of Khartoum to mitigate the anticipated impact of the Renaissance Dam being filled unilaterally, and the Sudanese Ministry of Irrigation called on the people to take necessary precautions to protect their lives.

Fourth: U.S. Envoy Booth and EU Special Representative Alexander Rondos arrived in Khartoum on Monday and met with President Abdelfattah al-Burhan to discuss developments in the tense situation on the Ethiopian/Sudanese borders, and their desire to mediate a diplomatic agreement on the Renaissance Dam dispute.

It is clear from President Sissi’s statements that he has despaired of resolving the Renaissance Dam crisis through African and U.S. mediation, and is convinced that Ethiopia is buying time. With only about two months left until Phase II of the reservoir filling process begins, he wanted to send a clear message to the U.S., EU, and their envoys that he will not hesitate to seek a military solution, especially now that he is reassured that the situation in Libya is on the mend, ‘reconciliation’ agreements have been made with Turkey, and Sudan’s government and people are now fully in Egypt’s trench because they too face an existential trench.

Sissi’s statements in Ismailia remind us of the red line he set for the Libyan crisis during his famous [July 2020] speech at Sidi Barani military base near the Egyptian/Libyan border. As Turkey and the Islamist Libyan GNA (National Accord Government) mobilized forces to storm Sirte and seize it as a deployment base into Libya’s Eastern oil crescent, posing a direct threat to Egyptian national security, Sissi proclaimed the city a red line with zero tolerance. This threat changed the balance of power in the Libyan crisis and stopped or froze all plans to storm the city.

The timing of the latest strong statements clearly threatening a military option reflects a boost in the Egyptian leadership’s confidence after Egyptian solutions, expertise, and hands resolved the problem of the container ship stuck in the Suez Canal, as well as the unprecedented popular rallying around the leadership and military establishment, especially after Egypt rejected a U.S. offer of technical assistance in this crisis conditional on a ‘quid pro quo’. However, the Egyptian source that revealed this stipulation to us declined to disclose details.

According to the joint statement from yesterday’s Cairo meeting between Egyptian Foreign Minister Sameh Shoukry and his Sudanese counterpart Mariam al-Sadiq al-Mahdi, proceeding with Phase II of the Renaissance Dam reservoir filling process poses a direct threat to Egyptian and Sudanese water security. According to the same Egyptian source, this statement falls under the framework of the two countries preparing for the coming phase in every domain, initiating plans of action agreed during President Sissi’s critical unannounced visit three weeks ago.

According to information Raialyoum has received from high-level Egyptian sources, Egyptian military authorities have taken three steps over the past few weeks to prepare for the military option, which is rapidly overtaking diplomatic options:

-Sending air defense systems to Sudan to protect its airspace from any aggressive Ethiopian action.

-Dispatching experts to study the topography of the Sudanese/Ethiopian border area near the Renaissance Dam (25 km away) and devising the necessary maps in anticipation of the conflict expanding or having to resort to the military option.

The same sources denied sending Egyptian warplanes to Sudan because that would be easy to detect via satellite, but this is not entirely off the table, depending on how developments may unfold.

It is hard to predict precisely what surprises the coming days and weeks may reveal in this thorny, volatile dossier, which is rapidly growing more heated, now that the Egyptian and Sudanese leaderships are convinced of the futility of continuing negotiations. President Sissi’s statements, or rather threats, maybe the final warning not only to Ethiopia, but also to the U.S., the EU, and a few Gulf states that now stand on the side of Ethiopia and Israel against Egypt and Sudan.

Filling the Renaissance Dam’s reservoirs within the next two years in the absence of an agreement would place 20 million Sudanese and over 5 million Egyptian families are at risk of starving to death, in addition to flooding and destroying Sudanese dams, cutting the High Aswan Dam’s electricity production by half or more, and reducing its lake’s fishery production to critical levels.

Like any other country, Egypt neither wants war nor does it pursue it, as our aforementioned source attests. However, should matters reach the point of starving millions of Egyptian families, there would be no other option, and the majority of the Egyptian people stand behind their leaders in protecting their nation’s water security.