HOME / WORLD / Sisi on the warpath in Libya 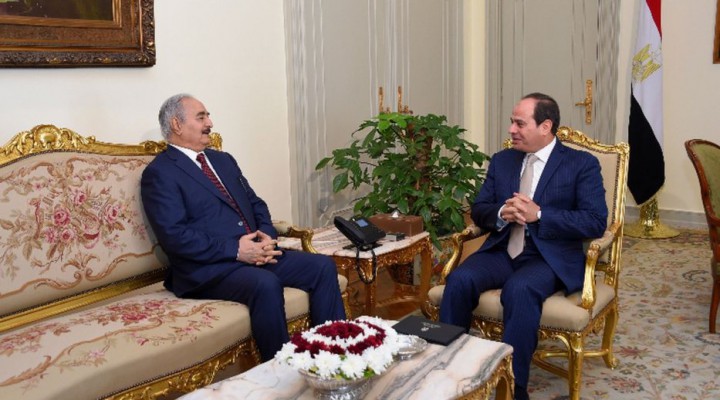 Libya’s Government of National Accord (GNA), which controls most of the west of the country, was right to accuse Egyptian President Abdelfattah as-Sisi of ‘beating the drums of war’ in the statement he made on Saturday while touring an army base in western Egypt. In a carefully-scripted announcement, Sisi declared that the Libyan city of Sirte and the nearby al-Jufra airbase, which the GNA is intent on recapturing, are a ‘red line’ for Egypt. He gave every impression that the Egyptian military was poised to intervene to support the forces of Gen. Khalifa Haftar, which have suffered a string of humiliating defeats by pro-GNA forces in recent weeks.

Sirte, the birthplace of former leader Muammar al-Gaddafi, sits in the middle of Libya’s Mediterranean coastline, separating the eastern and western parts of the country. What happens there will determine the course of the war being waged in Libya – using military and other means — by an array of local, regional and international actors. Sisi effectively served notice to the GNA and its Turkish backers that over-running Sirte would be unacceptable to Egypt and its allies and cause them to intervene.

From the perspective of Turkey and the internationally-recognized GNA, retaking control of Sirte (and its Qardabiya airbase) is crucial. It would safeguard the capital Tripoli from any future assaults and clear the way for them to advance eastwards towards the ‘Oil Crescent’ and south to al-Jufra, southern Libya, and the African Sahel.

Sisi has tended to avoid getting involved in external conflicts. His focus after he took power was on restoring the domestic security needed to achieve economic growth. Now he finds himself entangled in two prospective foreign wars simultaneously: one with Ethiopia, after the collapse of negotiations over its Renaissance Dam, over Egypt’s water security; and another in Libya, which Egypt sees as the principal source of threats to its national security. He seems to have opted to postpone the former and prioritize the latter. With a 1,000-km land border with Libya, Egypt views the prospect of pro-GNA forces reaching the east of the country – supported by Turkish armor and airpower plus some 14,000 fighters from extremist jihadi groups, including al-Qaeda and Islamic State – as a strategic threat far bigger than that posed by similar groups in the Sinai desert.

Sisi made sure to be seen surrounded by Egypt’s top military brass, including the commanders of all the armed services, when he made his statement. He also stressed that Egyptian military intervention in Libya would be consistent with international law – both under the right of self-defense granted by the UN Charter and as a response to a request by Libya’s ‘only legitimate popularly elected authority’ (meaning the Tobruk-based House of Representatives). And he insisted that the sole motive for making such a move would be to protect Egypt’s borders and national security.

This was aimed mainly at the Egyptian public: providing the rationale and the legal and political cover for the prospective war, casting it as a noble national cause, rallying people around their leaders should they decide to wage it, and preparing them to accept the inevitable casualties.

When Turkish President Recep Tayyip Erdogan rushed to provide his allies in Libya with arms, fighters, and air cover, he assumed the Egyptian military would avoid intervening to counter him. Maybe he still does. The received wisdom is that ever since Egypt’s disastrous involvement in the Yemen war in the 1960s – which cost it the lives of 30,000 soldiers – it has resolved never to deploy its army beyond its borders in support of any non-Egyptian cause.
Sisi could disprove this assumption to if he opts to dispense with that doctrine and send his army, navy, and air-force into Libya.

The threatened intervention by Egypt – with the support of Saudi Arabia, the UAE, France, and possibly Russia – will only happen if Sirte falls to the pro-GNA forces closing in on the city. If that occurs, the ‘Syrianisation’ of Libya that French President Emmanuel Macron warned against could well and truly begin.

The war that follows will not be quick or easy to end, given the number of parties involved and their numerous conflicting interests. We have learned that from the civil wars in Syria and Yemen, and previously Iraq and Lebanon. It could lead to the Middle East’s two biggest armies (Egypt’s and Turkey’s) being incapacitated, just like Iraq’s and Syria’s were. Israel and the US definitely see that as a benefit.

A Libya War II would set the Mediterranean basin ablaze and destabilize the entire Maghreb. It would divide NATO, eight of whose members support the French in Libya, while so far only Italy backs fellow-member Turkey. It could also more importantly lead to a revival of jihadi political Islam, after all the setbacks it was dealt in Syria, Iraq, Egypt, Afghanistan, and North Africa including Libya itself. Some analysts are convinced this will happen if the war goes the GNA side’s way. The underlying fact is that Libya is a failed state, comprising one million square kilometers of mainly uninhabited desert bordering on six African countries, where 20 million firearms and vast quantities of ammunition are in circulation. The warmest incubator was possible for jihadi groups.

Anything could happen, but one thing seems indisputable: Gaddafi must be rubbing his hands in his grave — at the failure, chaos, bloodshed, and instability that resulted from his overthrow.

0 thoughts on “Sisi on the warpath in Libya”