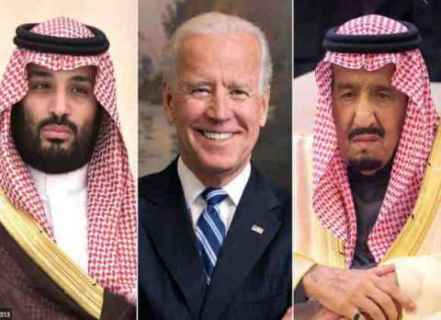 Muhammad Bin-Salman staked everything on Trump and Netanyahu. Now he has lost his bet.

If Israeli Prime Minister Benjamin Netanyahu is distraught because he has not yet received a phone call from Joe Biden, Saudi officials are even more alarmed. Not that they were awaiting a call of their own from the new US president, nor for him to make Riyadh the destination of his first foreign trip like his predecessor Donald Trump. But they are anticipating trouble and unpleasant surprises in relations with his administration. The portents were clear weeks before he was voted into office and Trump was dealt his humiliating defeat.

While campaigning for election, candidate Biden promised that the Saudi officials responsible for the murder of journalist Jamal Khashoggi and the killing of Yemeni children would be held to account, made to pay a high price and turned into pariahs. He believes the order to kill Khashoggi was given by Crown Prince Muhammad Bin-Salman, and his intelligence director Avril Haines has promised to publish the damning secret dossier about the murder in the Saudi consulate in Istanbul.

These undertakings were translated into practice in record time, just days after Biden took office. He suspended $36.5 billion worth of arms sales to Gulf states, including the provision of 50 advanced F-35 warplanes to the UAE and 7,500 precision missiles and drones to Saudi Arabia, as well as a variety of ‘smart’ munitions and devices.

More significant and important, in our view, was Secretary of State Anthony Blinken’s announcement that the US would take the Houthi Ansarullah movement off its ‘terrorist’ list and cease all diplomatic and military support for the Saudi-led war on Yemen, which Biden cast as a humanitarian disaster that caused the deaths of 110,00 Yemenis, spread famine and disease, and left 80% of the country’s population reliant on humanitarian aid.

The left/progressive wing of the US Democratic Party has been pushing hard for the Biden administration to end the Yemen war and challenge human rights abuses in Saudi Arabia and other Gulf and Arab states. But Biden also has a personal axe to grind. He hasn’t forgotten the insults, often couched in racist and abusive terms, the Saudis heaped on Barack Obama after he signed the Iran nuclear deal when Biden was his vice-president.

The Saudis have never been very comfortable with Democratic US administrations. Veteran former ambassador Prince Bandar Bin-Sultan complained of being side-lined by them, whereas he was a key mover and shaker in Washington when the Bushes, father and son, were in power. There is even a conspiracy theory doing the rounds in Washington and European capitals that the reason the Obama administration encouraged the invasion of Yemen in March 2015 was not to appease the Saudis after the sealing of the Iran deal, as was commonly supposed at the time, but to entangle them in a self-destructive war it knew they could never win – just as the Bush Sr. administration encouraged Saddam Hussein to invade Kuwait.

The stand-off between the Biden administration and Saudi Arabia began early over Yemen. It remains to be seen how further episodes will unfold. The Saudi authorities’ release of jailed activists Lujain al-Hathloul and Nawf Abdelaziz along with two dual US-Saudi nationals was a pre-emptive strike in this regard. It was aimed at absorbing the wrath of the new US administration, invalidating some of its charges, and offsetting pressure from Riyadh’s many enemies in the US human rights establishment and media — especially The Washington Post which is intent on avenging the killing of its former columnist Khashoggi by all and any means.

Hathloul’s release is undoubtedly good news, but it does not go nearly far enough. Arab and especially Saudi jails are overflowing with hundreds if not thousands of political prisoners mostly detained on fabricated charges without fair trials.

The halting of US arms sales at a time when Saudi Arabia’s enemies in Yemen are gaining the upper hand, plus the prospect of the US re-starting nuclear talks with Iran, has serious strategic consequences for the kingdom. The Biden administration need only suspend maintenance contracts for Saudi F-16 and F-15 fighters to ground half the Saudi air-force at a stroke.

One of the Saudi leadership’s biggest mistakes was to turn its back on Arab and Islamic causes and turn to Netanyahu as an alternative ally. They saw him as an insurance policy and a guaranteed means of overcoming any potential problems with any US administration. But like their gamble on Trump and his son-in-law, this turned out to be a losing bet. Now it is Netanyahu who needs someone to intercede between him and the US administration. And he may be out of power altogether in a few weeks’ time.

‘Freedom Is Blossoming’: After Dismembering a Journalist, Saudi Arabia Goes on a PR Spree

0 thoughts on “Saudi Arabia and the Biden Administration”