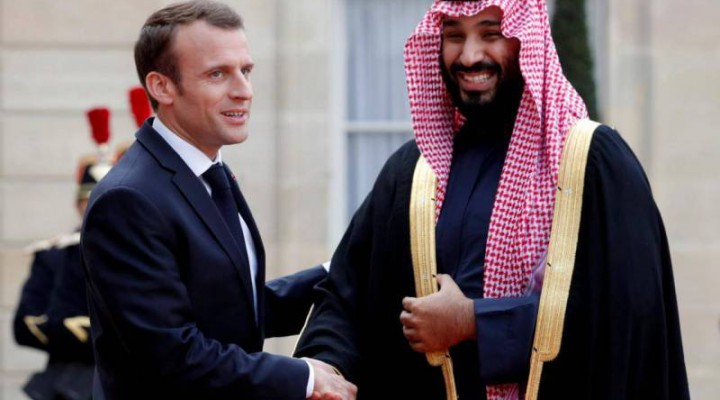 Emmanuel Macron’s ‘mediation’ between the Lebanese government and Saudi Arabia — which ‘triumphed’ with the resignation of Lebanese Information Minister Georges Kordahi — will go down in history as the most lucrative the region has ever seen. The French president returned home from his three-day trip to Abu Dhabi and Riyadh with a good $20 billion worth of arms and other deals in his pocket, and that is only what was made public.

The UAE greeted Macron with an announcement that it would buy 80 new general Rafale warplanes worth 16 billion euros and a variety of other French-made weapons, making it aerospace firm Dassault’s biggest foreign customer. The deal may have been arranged to compensate France for the $50 billion Australian submarine deal that was stolen from it by the US, souring relations between the two countries. It may even supplant the UAE’s deal with the US for the supply of F-35 fighters which Abu Dhabi changed its mind about because of the contract’s terms: including that the planes must be used under US supervision and will not be as technologically advanced as those provided to Israel.

Saudi Arabia did not unveil any new military purchases to show its appreciation for Macron and his mediation efforts. But his visit will not go unrewarded. A high price will be paid for it by the Saudi treasury in due course, whether in the form of arms deals or commercial agreements, once the smoke from the Kordahi crisis lifts.

The reason is plain: Macron was the first western leader to visit Saudi Arabia and meet its de facto ruler Crown Prince Muhammad Bin-Salman since the October 2018 murder of journalist Jamal Khashoggi at the Saudi consulate in Istanbul. This amounted to breaking his isolation and lifting the diplomatic embargo placed on him, starting a process of rehabilitation to smooth his path to succeeding his father as king.

Muhammad Bin-Salman wanted revenge against Kordahi because he touched on his most sensitive nerve: the folly of his disastrous war on Yemen. Moreover, how dare an ’employee’ of the kingdom (he used to host a show on a Saudi-owned TV channel), who owes his fame and fortune to it, take such a step?

The Kordahi affair will now drop out of the headlines after the minister was forced to quit on the grounds that he must put the national interest above his personal interest and self-respect and prevent the expulsion of some 200,000 Lebanese who work in Saudi Arabia. But the crisis in Lebanon generally, and in relations with Saudi Arabia, will carry on and possibly worsen.

Macron arranged for Muhammad Bin-Salman to place a phone call to Lebanese Prime Minister Najib Mikati in his presence. But he did not invite him to visit Saudi Arabia, offer to help Lebanon out of its financial crisis, or undertake to send back the four Gulf ambassadors who were withdrawn from Beirut.

I know from previous experience — specifically in the case of the PLO — how the Saudi establishment handles crises like this. It imposes its terms on the offending party and demands compliance with them but without making any promises in exchange. It merely raises the other sides expectations with a ‘hope for the best’, or a ‘let’s see what happens’, after it has been made to squirm.

Saudi Foreign Minister Prince Faisal Bin-Farhan said plainly that the problem with Lebanon was not Kordahi’s remarks but Hezbollah’s ‘dominance’ of the country. That means the crisis between the two sides will continue regardless of Kordahi’s resignation.

Hezbollah backed Kordahi and strongly opposed him quitting. It has not officially commented on the move, meaning it disapproves and the that the deadlock within Mikati’s government will continue. It is unable to meet because Hezbollah and its allies refuse to attend until the judge heading the Beirut port explosion probe, Tareq Bitar, is sacked — and ‘let’s see what happens’, Saudi-style, after that. One resignation for another, as it were.

Macron flew back to Paris in chirpy mood having pocketed the price for his mediation in full — maybe even more than he expected thanks to obligatory Arab generosity. But the crisis in Lebanon will persist even if the four ambassadors return and Mikati gets his desperately-awaited invitation to visit Riyadh.