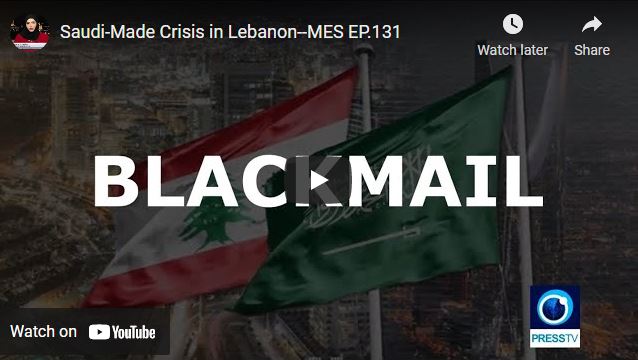 Mind you the televised interview was recorded more than a month before he was even appointed minister, which means MBS only wanted a pretext to spew all the venomous drama against Lebanon to further suffocate its people. The former celebrity TV presenter’s comments were a personal opinion and were made before he joined the government, which is why he publically refused to be blackmailed by any entity. I understand where MBS and his entourage are coming from though. You know since the last person who tried expressing his opinion against them vanished after getting kidnapped and chopped up in the Saudi consulate in Turkey.

To discuss this issue with us from Beirut is Dr. Bilal Lakis, academic and political researcher.

As if we are back to November 4, 2017, the day Saudi Crown Prince Mohammed bin Salman decided to kidnap the then Prime Minister of Lebanon, Saad Hariri, and force him to resign on Saudi state television.

Last week, Bin Salman decided to kidnap the entire Lebanese government, and force it to kneel before him, or to leave, under the pretext of statements made by Minister of Information George Qardahi, before his appointment as a minister, in which he criticized the Saudi aggression on Yemen.

And as 4 years ago, so was last week. As soon as the Saudi regime announced the withdrawal of its ambassador from Beirut, the expulsion of the Lebanese ambassador in Riyadh, and the cessation of imports from Lebanon, the same Persian Gulf Arab states, regional media outlets, and local Lebanese politicians themselves, went out to cover the madness of bin Salman and his decision to pressure Lebanon and push it into submission while blatantly blaming Hezbollah for it.