HOME / WORLD / It is time for Israel’s gut punch 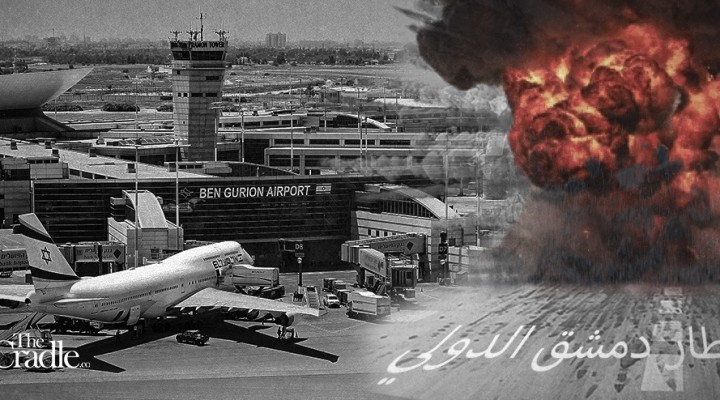 In an escalatory attack on Syria last Friday, Israeli warplanes launched missiles strikes on Damascus International Airport, damaging runways, passenger terminals and crossing a major red line. Tel Aviv’s latest aggression has put Syria’s main passenger airport out of service for days, if not weeks, in a deliberate provocation against the Axis of Resistance.

This aggression, which violates all the previous rules of engagement, came in the immediate aftermath of a month-long Israeli military exercise in the eastern Mediterranean. These drills, we were told, mimicked real-time attacks against Iran, Syria, southern Lebanon, and even the likes of Yemen and Iraq.

Hundreds of illegal Israeli missile strikes against Syria have taken place over the past five years, under the pretext of bombing ‘Iranian arms convoys to Hezbollah.’ Over time, these attacks have evolved into the bombing of alleged Syrian and Iranian military targets inside major cities in the Arab republic.

Friday’s Israeli attack occurred just before dawn, a day after Hezbollah Secretary General Hassan Nasrallah delivered a speech promising to target a UK/Greek gas exploration ship near the disputed Karish gas field. What made this latest attack unique was it marked the first time that the Damascus International Airport’s civilian transport area had been targeted by Israeli military strikes.

This means that Tel Aviv has underestimated the threats of retaliation from the Axis of Resistance. Israel, it seems, is subsumed in the fog of self-deception, and like “one who is safe from punishment, will continue to commit the same crimes.”

Will there be a response?

On Al-Quds Day, held on the last Friday of the holy month of Ramadan, Nasrallah stated that the Axis of Resistance will respond to any Israeli aggression within the Syrian depth. He further stressed that the long-held notion that retaliation must be reserved for the “right time and place” has fallen forever. This begs the tough question: Will the Axis respond to the missile raid on a most prominent and important site of the Syrian state, both politically and militarily (i.e., Damascus International Airport), in order to preserve its credibility, prestige and dignity?

The ones to answer this question are the Syrian leadership, and Syrian President Bashar Al-Assad personally. While it is clear that a response to this blatant and unprecedented Israeli aggression may lead to a regional war, silence, inaction, and avoidance of “Israeli traps” will almost certainly lead to further escalation from Tel Aviv.

If there is no Syrian or Axis military response to Israel’s crossing of this red line, we should not be surprised if future Israeli raids target all civilian airports, more Syrian infrastructure such as water and electric stations, and possibly the Presidential Palace itself.

Syria is not afraid of war and has fought four of them in the past 40 years – in addition to an 11-year internal war of attrition led by the United States, the European Union, and their Arab allies. The foreign aggressors spent hundreds of billions of dollars to destroy and partition Syria, and overthrow its government, but Damascus did not fall or surrender.

We do not believe Syria can fear a new war, especially because it has a solid army that is hard to defeat and has significant battle experience. Most importantly, we believe that the Syrian military will be difficult to defeat because it belongs to the Axis of Resistance, who itself has a massive arsenal of missiles, submarines and drones.

The likelihood of responding to this blatant Israeli aggression is much greater in our view than the possibilities of silence, even if this response leads to an all-out war. It cannot and should not be a random retaliatory strike, and it requires coordination and consultation with all the arms of the Resistance Axis, the development of a deterrence strategy in which roles are well distributed and integrated, and requires both patience and recklessness to achieve a positive, honorable outcome.

As Syria’s major power ally, Russia’s silence in the face of years of illegal Israeli strikes – and Moscow’s refusal to green light a Syrian military response or equip it with the necessary defense capabilities such as advanced S-400 missile systems – bears the greatest responsibility for reaching this unfortunate, humiliating situation for the Syrian leadership.

On Sunday, the Syrian army held immediate exercises by order of President Assad, under the supervision of the minister of defense and Deputy Commander-in-Chief of the Armed Forces General Ali Mahmoud Abbas, in the presence of the deputy chief of Russian forces present in Syria.

This may be an indication that the response to this Israeli aggression is imminent.

The time has come to respond

The Axis of Resistance should not hesitate to respond to this insult as soon as possible. This legal and justified retaliation should be at least as powerful as the illegal and unjustified Israeli aggression, and it should take place in the occupied Palestinian depth. From the perspective of a legitimate right to self-defense, the response should be tit-for-tat: an airport for an airport, a port for a port, and infrastructure for infrastructure.

We know very well that war is costly, but this time its cost to the Israeli enemy will be much greater because its losses will be “existential,” as Sayyed Hassan Nasrallah said in his last speech.

Syria did not choose this war; it did not initiate aggression and has demonstrated the highest levels of self-restraint. But now the knife has reached the bone, and restraint has become counterproductive.

At this point in time, inaction would prolong a deadly siege that has exceeded the limit of starvation. It is why the time for debate is over, and all honorable people should stand in the trenches to defend this nation and its just causes. Syria has sacrificed tens of thousands of martyrs. It has lost lives and territories, but refused to bargain, surrender and normalize relations with the occupation forces. For this, Syrians have paid the heftiest of prices in the Arab and Islamic realm.

We stood, and we will stand, in the trench of Syria, in confronting this Israeli aggression, and responding to it with the same amount of ferocity, if not more. Over the course of 8,000 years of its honorable civilized history, Syria has faced many aggressors, and it will emerge victorious once again.

0 thoughts on “It is time for Israel’s gut punch”