HOME / WORLD / Another Step Back for Biden: Attack on Syria Draws Establishment Cheers 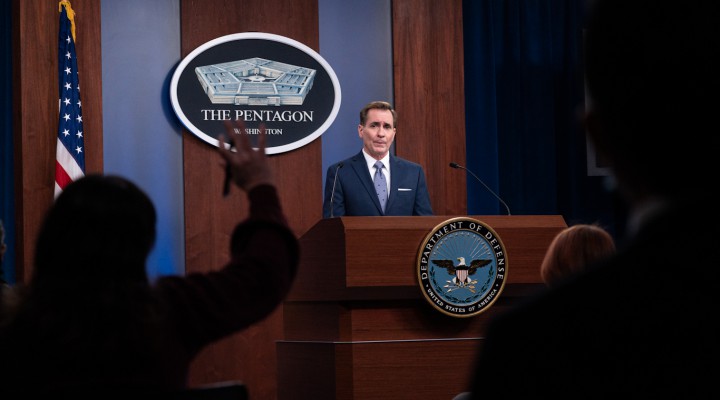 “This is basically the polar opposite of getting back in the peace agreement, which was what [Biden] promised to do.” — Political commentator Kyle Kulinski

MPN- WASHINGTON — Barely a month into his presidency, Joe Biden launched an airstrike on Syria yesterday. The attack was reportedly aimed at militias close to the Iraq border, killing 22 people — considerably more than the White House first claimed. In the attack, 1.75 tons of bombs were dropped on a small border-crossing village, according to The New York Times.

It was commonly reported that the target of the raid was pro-Iran forces — specifically, members of the Popular Mobilization Front, a contingent of Iraqi militia groups formed to fight ISIS that were eventually brought under the command of the Iraqi government. In its headline, the Times described the militias as such, although in the body of its report the paper admitted it had no evidence and was not sure this was the case.

U.S. government spokespersons framed the decision to bomb a country over 6,000 miles away as “defensive in nature” and as a response to attacks on American personnel in the region. The Syrian government characterized the incident as “cowardly” and a violation of international law.

NYT headline affirms Pentagon claim that the group the US bombed in Syria is backed by Iran, then admits it doesn't actually know if the group has any link to Iran.

The spirit of Judith Miller lives on at the Paper of Record.https://t.co/BIthsi6fWH

The news was met with cheers from many of Biden’s more prominent supporters. “Good. Targeting our troops should carry a consequence,” wrote Time columnist David French. Former U.S. Ambassador to Russia Michael McFaul was of a similar opinion, tweeting his approval of the attack. “So different having military action under Biden. No middle school-level threats on Twitter. Trust Biden and his team’s competence,” reacted Amy Siskind, a prominent liberal writer.

Others in the press were equally delighted. “By authorizing air strikes, the U.S. president showed he won’t ignore Tehran’s provocations while pursuing diplomacy,” wrote Bloomberg columnist Bobby Ghosh. Ghosh claimed that the strike would be sure to snap Iran out of its “sense of impunity” and deter any more “aggression” against the United States.

So, @JoeBiden bombs Syria and kills the minimum wage hike, confirming every fear progressives had. Soon they'll renege on getting $2000 checks to everyone in the middle class by limiting who gets it (to appease their donors). The establishment is back! And it absolutely sucks.

While the bombing drew applause from establishment Democrats, it also elicited condemnation from anti-war voices. “This is basically the polar opposite of getting back in the peace agreement, which was what [Biden] promised to do. A liar and a warmonger,” concluded political commentator Kyle Kulinski. “You will never bomb your way to peace,” reacted progressive activist and podcast host Jordan Uhl.

No step forward, two steps back

The news of the bombing came at the same time as reports that the new administration was planning to drop its attempts to pass a federal $15 minimum wage. Senate Parliamentarian Elizabeth MacDonough ruled that a $15 minimum wage could not be part of Biden’s $1.9 trillion COVID relief plan. It is perfectly within the power of the Vice President Kamala Harris, serving in her capacity as president of the Senate, to overrule the decision and push forward with the plan regardless. However, reports suggest the Biden administration is not looking to do so. “Today Biden approved an airstrike in Syria and the Senate parliamentarian shot down the federal minimum wage hike through reconciliation. Dems can overrule her but Biden doesn’t want to. Dems will lose everything in the midterms and possibly the next general election. And they’ll deserve it,” fumed Ana Kasparian of “The Young Turks.”

The news capped off a month marked largely with disappointment for progressives. After campaigning on a promise to “immediately” send out a $2,000 check to every American, Biden has walked back that offer to a means-tested $1,400, something that is still stuck in negotiations and will only be sent out in the spring at the earliest.

Earlier this week, Trump-era child prisons along the Mexican border were reopened, this time with the word “bienvenidos” (Spanish for “welcome”) daubed on their exterior. Washington Post columnist Greg Sargent insisted that Biden’s camps were fundamentally different. “What Biden is doing has nothing in common with ‘kids in cages,’” he wrote, describing them merely as “warehouse-like facilities.”

Have Syrians tried pushing Biden's bombs to the left?

The new president’s Middle Eastern policies have left many pro-peace figures disappointed. While pledging to end the war in Yemen as part of his election campaigning, Biden has merely promised to halt support for “offensive” Saudi actions and pause “relevant” arms sales. Yet his administration simultaneously reaffirmed Saudi Arabia’s right to defend itself and immediately began condemning supposed Houthi attacks on its neighbor to the north, suggesting that the change is one of semantics rather than policy. Earlier this week, State Department official Timothy Lenderking also, according to an official communication, bizarrely “expressed gratitude for Saudi Arabia’s generous support over the decades for the people of Yemen.” Biden has also approved the controversial Trump-era decision to move the U.S. Embassy in Israel to Jerusalem.

While few expected him to be an anti-war president, the expectation on Iran was that Biden would return to the nuclear deal signed by President Barack Obama, a deal that kept a lid on U.S. aggression against the country. However, the 78-year-old Delawarean is dragging his feet on that, too. This latest strike is hardly likely to improve matters.

0 thoughts on “Another Step Back for Biden: Attack on Syria Draws Establishment Cheers”