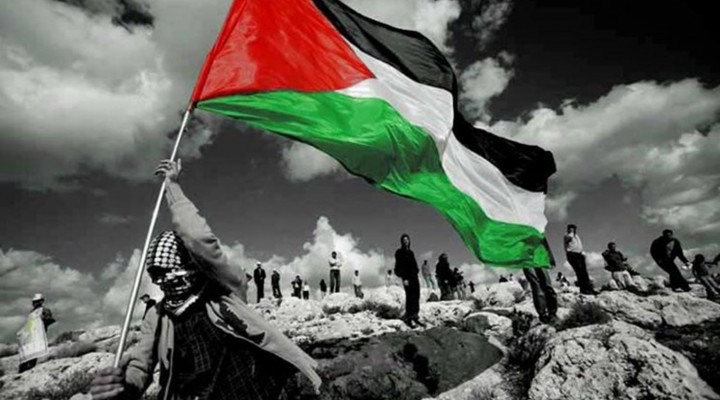 The heroic steadfastness being shown by Jerusalem’s Palestinians is not in defence of a few homes in the Sheikh Jarrah neighbourhood or to secure the reopening of the Damascus Gate plaza. It is an initial explosion of pressure that has been building inexorably at the hands of a racist and cruel occupier intent on uprooting them and wiping out all traces of their presence.

Friday’s spontaneous gathering of 70,000 people to pray at and around the al-Aqsa mosque in brave defiance of the occupation should be a wake-up call to all those who dreamed Jerusalem could be ‘unified’ and its Arab and Islamic identity erased forever at the whim of Jared Kushner and a handful of Arab collaborators. These self-deluders do not know the mettle of the Palestinian people or their history of forbearance, resilience and resistance.

The explosion is definitely coming. Those who banked on being able to prevent it using a cowed and submissive Palestinian Authority, financial bribes, and a policy of starvation to bring people to their knees, will soon discover how wrong they were. The PA is in intensive care and gasping its last after receiving two deadly blows in succession: its cancellation of elections for fear of defeat, and the outbreak of the Jerusalem intifada which its quisling security forces cannot subdue.

We are witnessing the close of a dark decade of suffering and humiliation which saw Arab states targeted by schemes to destroy and dismember them and plunge them into bloody anarchy, and the dawn of a bright new era of resistance and the foiling of US/Israeli designs in the region.

Surprises can be expected in the near future as rules of engagement change, equations are overturned and alliances shift. This is not said out of wishful thinking but based on tangible developments on the ground, including.

– Saturday’s emergency meeting between Benjamin Netanyahu and military and security chiefs and key ministers to draw up plans to confront and try to quash the Jerusalem intifada.

– The massive military exercise involving all Israeli land, sea and air forces starting Sunday, which is described as the biggest ever and could last several weeks.

– Hezbollah leader Hassan Nasrallah’s announcement on Friday that Hezbollah forces have been placed on maximum alert and his warning of a firm response if Israeli forces engage in any attack, advance or adventure during the exercise. He would not have done this without good reason to suspect the manoeuvres could be used as cover to launch an assault on Lebanon, invasion of Syria and/or strike against Iran.

– Reported plans by right-wing Israeli parties to mobilise 30,000 settlers to storm the al-Aqsa compound. This is reminiscent of what Ariel Sharon did in 2000, triggering the Second Intifada which lasted four years, terrified Israel and its settlers, shook up its security, and caused a flight of investors along with thousands of settlers.

– The cohesion between the resistance factions in Gaza and the protestors in Jerusalem. The military commanders of both Hamas and Islamic Jihad both issued statements affirming that the people of Jerusalem and Sheikh Jarrah do not stand alone and vowing fierce retribution for attacks against them.

– What worries the Israelis most is the Jerusalem intifada spreading to the West Bank, where the PA’s grip is weakening, its governing Fateh Movement is split, and it faces growing public anger. Arms are available in the West Bank and the 1948 areas, and the current generation of intifadists does not give the impression of favouring purely peaceful resistance.

– The Meron footbridge collapse in which 45 people were killed and hundreds injured showed Israel to be ill-prepared to handle major emergencies. It would be worse if a long or short war broke out and barrages of guided missiles began striking the Israeli interior.

– Israel has witnessed several unexplained incidents recently including explosions at a missile factory in Ramleh, major fires near Lydda Airport and in Haifa and an ammonia gas leak at the port, not to mention the Syrian missile that landed near Dimona. These may or may not have been mere accidents, but details of them remain subject to censorship.

– The fulsome support for the Palestinian intifada voiced by Iran, which is the main supplier of missiles to resistance groups in the Gaza Strip and eager to do the same in the West Bank.

– Iran also stands to make strategic gains in the years to come following its wooing by the US and its dialogue with Saudi Arabia. If the agreement is reached on reactivating the JCPOA nuclear agreement, the country will be relieved of sanctions, regain its sequestered funds, and be free to trade, export oil and prosper. If the talks fail it will enhance its uranium enrichment to weapons-grade and bolster its strategic alliances with Russia, China and North Korea.

The locus of tension in the Middle East has shifted from the Gulf to the eastern Mediterranean and refocused on the core central cause of the Arab-Israeli conflict, after being side-lined for ten years by the so-called Arab Spring and the normalisation moves and ‘Deal of Century’ that followed. The Biden administration has come to the conclusion that Iran cannot be defeated militarily except at a very great coast and so reverted to a policy of containment rather confrontation. That means Netanyahu’s strategy for dragging the US and Europe into a war against Iran has collapsed, leaving him snubbed and isolated.

Because of this, it cannot be ruled out that the defeated Netanyahu, facing the prospect of life behind bars, could start a major war against Iran or minor wars against the Gaza Strip or South Lebanon in order to reshuffle the cards and try to save himself and prolong his time in office.

That would be the biggest mistake of his life.

0 thoughts on “A new era dawns in Jerusalem”