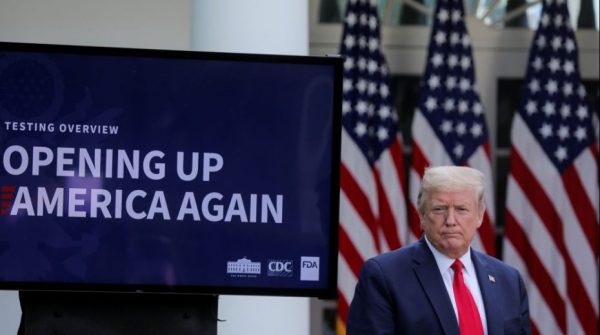 It is important to note that no Americans have been killed or injured as a result of recent Iranian, Russian, or Chinese and North Korean actions.

When in trouble politically, governments have traditionally conjured up a foreign enemy to explain why things are going wrong. Whatever one chooses to believe about the coronavirus, the fact is that it has resulted in considerable political backlash against a number of governments whose behavior has been perceived as either too extreme or too dilatory. Donald Trump’s White House has taken shots from both directions and the response to the disease has also been pilloried due to repeated gaffes by the president himself. The latest mis-spoke, now being framed by Trump’s press secretary as sarcasm, involved a presidential suggestion that one might consider injecting or imbibing disinfectant to treat the disease, either of which could easily prove lethal.

So, the administration is desperate to change the narrative and has decided to hit on the old expedient, namely seeking out a foreign enemy to distract from what is going on in the nation’s hospitals. The tale of malevolent foreigners has been picked up by a number of mainstream media outlets and has proven especially titillating because there is not just one bad guy, but instead at least four: China, Russia, North Korea and Iran.

The accepted narrative is that America’s enemies are now taking advantage of a moment of weakness due to the lockdown response to the coronavirus and have stepped up their attacks, both physical and metaphorical, on the Exceptional Nation Under God. The most recent claim that the United States is being targeted involves an incident in mid-April during which a swarm of Iranian gunboats allegedly harassed a group of American warships conducting a training exercise in the Persian Gulf by crossing the bows and sterns of the U.S. vessels at close range. The maneuvers were described by the Navy as “unsafe and unprofessional” but the tiny speedboats in no way threatened the much larger warships (note the photo in the link which illustrates the disparity in size between the two vessels).

Donald Trump characteristically responded to the incident with a tweet last Wednesday: “I have instructed the United States Navy to shoot down and destroy any and all Iranian gunboats if they harass our ships at sea.” Although no context was provided, the president commands the armed forces and the tweet essentially defined the rules of engagement, meaning that it would be up to the ships’ commanders to determine whether or not they are being harassed. If so, the would be able to open fire and destroy the Iranian boats. Of course, there might be a physical problem in “shooting down” a gunboat that is in the water rather than in the air.

In the Mediterranean the threat against the U.S. consisted of two Russian jet fighters flying close to a Navy P8-A submarine surveillance plane. The Russian fighters were scrambled from Hmeymim air base in Syria after the U.S. aircraft approached Syrian airspace and Russian military facilities. One of the fighters, a SU-35 carried out an “unsafe” maneuver when it flew upside down at high-speed 25 feet in front of the Navy plane.

Also in mid-April, North Korea meanwhile fired cruise missiles into the Sea of Japan amidst rumors that its head of state Kim Jong Un might be dead or dying after major surgery. President Trump was unconcerned about the missiles and also commented that he had received a “nice note” from the North Korean leader.

Wars and rumors of wars notwithstanding, China continues to be the principal target for Democrats and Republicans alike on Capitol Hill. GOP congressmen are reportedly urging sanctions against China while there are already a number of coronavirus lawsuits targeting Chinese assets in U.S. courts, at least one of which has a trillion dollar price tag. Theories about the deliberate weaponization of the Wuhan virus abound and they are also mixed in with stories of how Beijing unleashed the weapons and is now engaged in Russia style social media intervention to promote the notion that the United States has proven incapable of handling what has become a major medical emergency. However, those who are pushing the idea that the Chinese communist party has declared war by other means fail to explain why the government in Beijing is so keen on destroying its largest export market. If the U.S. economy goes down a large part of the Chinese economy will go with it, particularly if China’s second largest export market Europe is also suffering.

The craziness of what is going on in the context of the disruption caused by the coronavirus has apparently increased the normal paranoia level at the top levels of the U.S. government. Pentagon plans to fight a war with Russia and China simultaneously, first mooted in 2018, are still a work in progress in spite of the fact that Washington has fewer cards to play currently than it did two years ago. The economy is down and prospects for recovery are speculative at best, but the war machine rolls on. Many Americans tired of the perpetual warfare are hoping that the virus aftermath will include demands for a genuine national health system that will perforce gut the Pentagon budget, leading to an eventual withdrawal from empire.

In spite of the hysteria, it is important to note that no Americans have been killed or injured as a result of recent Iranian, Russian, Chinese and North Korean actions. When you station ships and planes close to or even on the borders of countries that you have labeled as enemies it would be reasonable to expect that there will be pushback. And as for taking advantage of the virus, it is the United States that has suggested that it would do so in the cases of Iran and Venezuela, exerting “maximum pressure” on both countries in their times of troubles to bring about regime change. If those countries that are accustomed to being regularly targeted by the United States are taking advantage of an opportunity to diminish America’s ability to intervene globally, no one should be surprised, but it is a fantasy to make the hysterical claim that the United States has now become the victim of some kind of vast international conspiracy.

America the Victim: Are Enemies Lining Up for Revenge in the Wake of the Coronavirus?

0 thoughts on “America the Victim”