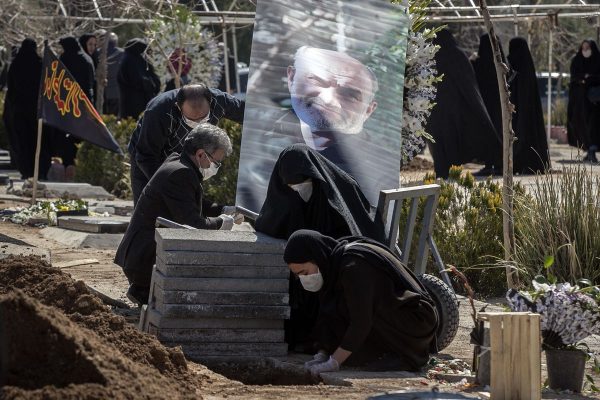 Denying medicines to Iran and Venezuela is a crime against humanity

Much remains to be learned about the coronavirus, though it is quite possible that it will not be possible to determine how it developed if the various governments that might be involved prove to be uncooperative. The Chinese carefully controlled the information on the virus in its early stages, though they eventually adopted a complete lockdown to prevent its spread that seems to have been successful and might serve as a model for other nations to follow if they can overcome concerns about threats to civil liberties that evolve from placing too much power in the hands of corrupt and ignorant government officials.

Over two weeks ago, I suggested that the current form of corona might have possibly escaped from someone’s lab where a weaponized virus was being developed, most likely in China itself, though nations like the United States and Israel which are believed to have significant capabilities in biowarfare as well as a geopolitical motive to unleash the disease on certain countries should not be excluded. I still believe that assessment should be considered as viable particularly as the politicization process involving the virus is now fully in play.

China is now claiming that U.S. soldiers involved in the World Military Games held in Wuhan back in October might have deliberately planted the virus, while President Donald Trump and other Republicans in the U.S. are calling the disease the Wuhan or China virus, implying willful or careless behavior by the Chinese and a clear effort to demonize the Beijing government by exploiting the appearance of the virus as a wedge issue. And one might take note of the fact that the virus has particularly hit both China and Iran, countries that are on Washington’s enemy list, which generates additional conspiracy theories.

Donald Trump is not exactly a person overflowing with compassion. When corona virus began to emerge in the U.S. he called it a “hoax” and urged everyone to keep going to work even if ill, precisely the opposite of what was being recommended by most responsible medical authorities. He is now planning to throw $1200 dollars at each American resident whether they need it or not to undo the political damage, a proposal that will cost as much as $500 billion of money that the United States does not have and which it will have to either print or borrow. The money should be going to those who are now unemployed as a result of the virus, a point that surprisingly enough is being made by several Republican Senators.

Hundreds of billions more will go to the usual “victims,” banks and large corporations that will use the cash to pay off long terms loans and also to buyback their own stock and raise the value of their shares for investors. That is precisely what happened in 2008, with little to show for the average American.

One of the most truly despicable aspects of the coronavirus is how it is being exploited by Washington to punish countries like Iran and Venezuela, currently the enemy-designates of the inside the Beltway crowd. It would be possible to describe the Trump Administration policy towards both nations as sadistic apart from the fact that the behavior of the president and Secretary of State Mike Pompeo might actually shock the Marquis de Sade.

Venezuela has been denied a $5 billion International Monetary Fund loan to combat the virus based on the seemingly irrelevant and politically motivated argument that it is not clear who represents the legitimate government in the country, whether it is Nicola Maduro, the president, or Juan Guaido, the aspirant to the position of head of state being promoted by Washington. The White House has also declared a “maximum pressure March” directed against the Venezuelan economy, with the health care sector particularly targeted. So, Venezuelans will die and Maduro will undoubtedly continue to run the government, making the position of the Trump Administration demanding regime change both toxic and pointless.

Iran is also seeking a $5 billion IMF emergency loan to cope with the crisis, a request that will almost certainly also be torpedoed by the Trump Administration. Last Thursday Pompeo doubled down on Iran, initiating new sanctions based on the evidence-free allegation that Tehran is behind the recent attacks on U.S. military bases in Iraq. He also confirmed that, as part of the “maximum pressure” policy, all existing sanctions will remain in place, saying “Our sanctions will deprive the regime of critical income from its petrochemical industry and further Iran’s economic and diplomatic isolation. The United States will continue to fully enforce our sanctions.”

The fact that the Iraqi government and parliament have asked the Americans to close their bases in the country while the U.S. is highly unpopular due to its killing of Iraqi militiamen and soldiers seems to have escaped Pompeo as possible causes of the series of missile strikes. Pompeo also seems oblivious to the fact that remnants of ISIS are active in the areas where the bases are located and have proven quite capable of firing missiles from improvised pick-up truck launchers.

Last week Iran confirmed that it had experienced 988 deaths from the coronavirus and the infected number in the tens of thousands, but many believe that testing has been inadequate and the government may be understating the number of cases for political reasons. Pompeo has repeatedly insisted that Iran will be allowed to buy necessary medicines from abroad, but the U.S-imposed currency exchange restrictions on the activity of the national bank as well as of the country’s remaining commercial banks means that there is no mechanism to pay for the drugs and medical supplies so the country is combating the epidemic without many badly needed pharmaceuticals.

Even some congressmen have noticed that there is something fundamentally evil about the U.S. policy. Massachusetts Senator Elizabeth Warren sent a letter to Pompeo and Secretary of the Treasury Steve Mnuchin that included “I am concerned about the vulnerability of the Iranian people to the coronavirus and the potential for Iran’s coronavirus cases to worsen the spread of the disease to neighboring countries, including regional allies, and to the rest of the world. Therefore, I seek an assurance that every reasonable effort is being made by the United States to ensure the availability of medicine and other non-sanctionable humanitarian items to the Iranian people to help prevent the further spread of the coronavirus.”

Senator Bernie Sanders tweeted “Iran is facing a catastrophic toll from the coronavirus pandemic. U.S. sanctions should not be contributing to this humanitarian disaster. As a caring nation, we must lift any sanctions hurting Iran’s ability to address this crisis, including financial sanctions.”

Iran’s government is admittedly unpopular due to the mishandling of the shoot-down of the Ukrainian airliner and the inability to cope with a deepening economic crisis caused largely by the U.S. imposed sanctions. Given the current signs of weakness and instability in Tehran, there was recently a meeting in the White House discussing whether the U.S. should take the opportunity to attack Iran. It was, fortunately, rejected by a narrow margin when the Secretary of Defense and the Joint Chiefs of Staff strongly opposed the proposal.

Meanwhile the usual Iranophobes in Washington at the Israeli-linked Foundation for the Defense of Democracies (FDD) have seen an opportunity to tighten the screws a bit more and hopefully bring down the Iranian leadership through economic warfare. Their support for increasing sanctions on Iran is a policy designed to inflict the maximum pain on the Iranian people so they will rise up seeking to destroy their government. If that were to occur it would mean a civil war, but the folks at FDD would be hard pressed to even acknowledge the blood on their hands.

Ironically, if the United States were to make a serious effort to actually help the Iranian people by suspending sanctions and helping to expedite medical assistance it might actually produce a genuine thaw in a relationship that has been unnecessarily locked into 1979 and the embassy hostage crisis. Waging war on innocent people should not in any event be what the United States of America is all about. A shift in policies that actually demonstrates that Washington might be interested in saving lives rather than destroying them would be welcomed by most of the world and also by many Americans.