HOME / WORLD / The Fascist ‘Big Lies’ – Deceptive Names Are Back 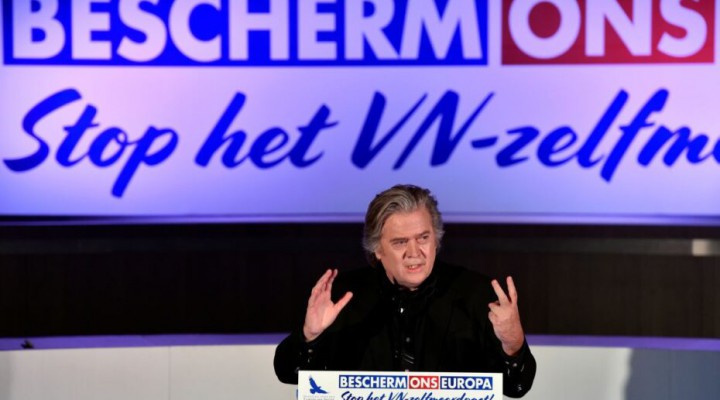 We should remain vigilant against the far-right, which continues to misappropriate the historical and traditional names of the parties of labor, the popular masses, equality, and progressivism.

From 1920 to 1945, the formal name of the German Nazi Party was the National Socialist German Workers’ Party, abbreviated NSDAP in German. Despite its name, there was nothing even remotely “socialist” or “workers” related about the Nazi Party. Its very foundation was t o combat the influence of labor unions, particularly those closely-linked to the Socialists or Communists. Socialist ideology, whether it was of the social democratic or Marxist -Leninist version, was anathema to Nazi policy. Therefore, it was the height of hypocrisy that the Nazis, with their financial backing from Germany’s leading industrialists – Krupp, Thyssen, and Opel, to name a few – would appropriate the terms socialist and workers for their own designs. When “socialist” was added to the “National German Workers’ Party” in 1920, in a jaded attempt to appeal to lower middle class left-wing laborers, Adolf Hitler vehemently objected. The term “socialist” within the official name of the Nazi Party was more of a mockery of socialism than anything else.

Today, there are elements within the Donald Trump wing of the Republican Party desiring to rebrand the party as a “Republican Workers’ Party.” There are indications that Trump supports these efforts. Trump, who eschews books or any other reading material for that matter, is known to have once kept a book of Hitler’s speeches at his bedside. Trump is, therefore, keenly aware of the success the Nazis in Germany had in appealing to labor ranks to support its cause. However, just as the Nazis had no commitment to labor, the Republican Party has never supported the workers. It is and always has been a party representing the moneyed classes. Republicans serve the interests of Wall Street, not Main Street. Trump, more than anyone, knows this. In his four years as president, not one of Trump’s policies helped the workers of America, particularly those represented by organized labor.

Just as with the Nazis between the two World Wars, there is a coordinated global effort to re-brand far-right political parties as being friendly to and supportive of the working class. However, the financing for such re-branding emanates largely from billionaires, who have no interest in the working class. This is merely an effort to expand political power through running division and deception operations in electoral campaigns around the world. Those financing this disinformation program include the hedge fund father-daughter team of Robert and Rebekah Mercer, fugitive Chinese billionaire Guo Wengui, and billionaire industrialist Charles Koch. Former and, reportedly, current Trump strategist Steve Bannon has received funding from the Mercers and Guo to organize an international fascist movement of political parties, many with deceptive names.

Bannon’s fascist international, which is based in Brussels and called “The Movement,” has, in addition to the Republican Party in the United States, targeted parties in Brazil, where Bannon is close to far-right President Jair Bolsonaro and his politician sons. In 2018, Bolsonaro, who has praised Hitler and Italian Fascist leader Benito Mussolini, ran on the presidential ticket of the Social Liberal Party (PSL). One might believe that such a party would be socially liberal. They would be dead wrong. The PSL is as far-right as Bolsonaro and opposes equal rights for women and supports Brazil’s past military dictatorship. One faction wants to restore Brazil’s emperor and become a monarchy. Likewise, there is nothing “progressive” about the Brazilian Progressive Party – the Progressistas. The party is right wing and embraces Brazilian nationalism, which are Hardly progressive virtues.

The false branding of Brazilian political parties is made to order for fascists like Bannon, his financial benefactors, and the Bolsonaro family. Another example of false political advertising is the Brazilian Labor Party, which, far from embracing labor or workers’ rights, believes in fiscal conservatism, laissez-faire business policies, and social conservatism. Likewise, the Brazilian Labor Renewal Party is about as far from supporting labor as possible. It is pro-Bolsonaro and prone to advancing conspiracies that are also promoted by neo-Nazis. The Party of the Brazilian Women might be confused as a women’s rights party. They are not. They are anti-feminist and believe in paternalistic oligarchy and social conservatism.

A similar confusing situation exists in Colombia. The ruling Democratic Center party is neither democratic nor centrist. It is the party of current far-right President Ivan Duque and his mentor, former President Alvaro Uribe. The Democratic Center represents Colombia’s oligarchs and the interests of the Medellin drug cartel. Likewise, there is nothing “radical,” in the standard political definition, about the Radical Change Party. It is right-wing and supports both Duque and Uribe.

Around the world, the placement of the word “Christian” in a party’s title does not mean that it is committed to Christian teachings of tolerance and equality. Aside from Christian Democratic parties, far-right parties use “Christian” to entrap the politically gullible. Alliance C-Christians for Germany (Bündnis C) unconditionally supports Israel while it debases the United Nations, public education, and abortions. Similarly, political Islamic parties use the word “democratic” in their titles even though their 13th century platforms, inclusive of arcane sharia law, are far from democratic.

Deceptive political party names and the confusion they cause are not limited to Latin America. Voters in California have erroneously registered to vote as “Independents” by mistakenly registering under the “American Independent Party,” which has appeared on California ballots since 1968 when Alabama Governor George Wallace ran on the party’s ticket as a third-party presidential candidate. Wallace subsequently abandoned the upstart party and returned to the Democratic Party fold four years later. However, the American Independent Party lived on in California, where it served as a political umbrella for several far-right candidates, some tied to neo-Nazis. During the 2016 presidential race, after an upsurge in party registrations by voters who believed they were registering as generic independents, the American Independent Party falsely claimed that it was the “Fastest Growing Political Party in California.”

Bannon’s “Movement” in Brussels is headquartered at the same address used by Mischaël Modrikamen, the leader of a defunct far-right political party that was mis-named the “Popular Party.” In Ukraine, “People’s Front” is used by a decidedly right-wing party that has menacingly organized a military branch. The words “popular” or “people’s” have traditionally been associated with left-wing and progressive broad fronts going back to the Popular Front of President Salvador Allende of Chile and, before that, of Socialist-Communist Popular Front coalition governments of the Spanish Second Republic of 1936 and pre-World War II France. The pre-war Popular Fronts in Spain and France, as well as those in other countries, including Germany and Great Britain, failed because of the perfidious attitude of Trotskyists, who were more than willing to disrupt anti-fascist Popular Fronts, even if they gave way to fascist victories. Today, there are ample examples of Trotskyists cooperating with neo-fascists against established parties of the left. That is why Bannon has, on occasion, expressed his admiration for “Marxist-Leninists.” It is nothing more than a power play to entice confused “populists” of the left, particularly the “Bernie or Bust” supporters of Vermont Independent Socialist U.S. Senator Bernie Sanders, who has never been a member of the Democratic Party, although he caucuses with them in the Senate.

As Trump, Bannon, and others seek to re-brand the Republican Party, they will not only be reaching out to die-hard Sanders supporters, who falsely contend that the Democratic Party twice cheated their candidate from the presidential nomination, but also to blue collar workers in the rust belt who have been taken in by Trump’s nationalistic rhetoric on international trade and U.S. industrial decline.

Around the world, political parties and movements, as well as the media, should remain vigilant against the far-right, which continues to misappropriate the historical and traditional names of the parties of labor, the popular masses, equality, and progressivism.

Chris Hedges & Abby Martin: No Way Out Through Elections

0 thoughts on “The Fascist ‘Big Lies’ – Deceptive Names Are Back”