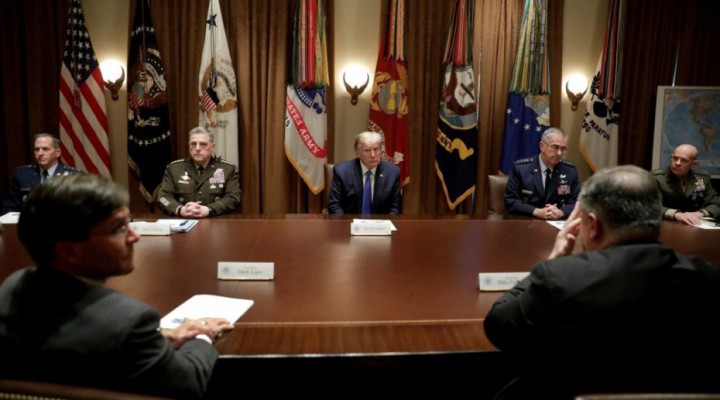 Trump never has and never will experience empathy and thousands of Americans and others have died and are dying because of it, Wayne Madsen writes.

U.S. Army Field Manual 6-22, titled “Leadership Development,” states that the ability to show empathy toward others is a key factor in exhibiting Army leadership qualities. Donald Trump, who is ordering all 1000 graduating U.S. Army cadets at West Point back to campus on June 13 from sheltering at home during the Covid-19 pandemic, does not possess the leadership skills that have been drilled into each of the new Army Second Lieutenants who will be present for Trump’s commencement address. In fact, Trump’s overly-acquiescent Secretary of Defense, Mark Esper, had to issue a waiver for the cadets to travel because he had previously banned military personnel from travel until June 30.

The Army Field Manual states that “The capacity for empathy is an important attribute for leaders to possess. Empathy can allow leaders to understand how their actions will make others feel and react. Empathy can help leaders to understand those that they deal with including other Soldiers, Army Civilians, local populace, and even enemy forces. Being able to see from another’s viewpoint enables a leader to understand those around them better.” During Trump’s scheduled commencement speech, which will be full of his usual right-wing vitriol, will be directed at a class of non-political newly-minted Army officers. None of what Trump says will comply with the Army’s leadership training.

On May 8, Trump visited Washington, DC’s World War II Memorial to honor the veterans of World War II on the occasion of the 75th anniversary of Victory in Europe (VE) Day. Trump, traveling by motorcade from a White House rife with Covid-19 cases, including inside the presidential private quarters and his Secret Service protective detail, refused to wear a mask, thus putting at risk World War II veterans, including some between the ages of 96 and 100, to being infected with the highly-contagious virus. Esper, a coward of the first degree, hid behind the veterans while also refusing to wear a mask.

Trump’s designated “blond bimbo” and PR flack masquerading as a White House Press Secretary, former CNN blathering head Kayleigh McEnany, placed the onus for being exposed to the virus on the elderly veterans, stating, “They made the choice to come here.” McEnany, whose idea of personal sacrifice is not being able to dine at Washington’s chic restaurants during the pandemic, was absolutely galling in her airy dismissal of the virus threat posed by her draft-dodging boss to veterans of Monte Cassino, Omaha Beach, Anzio, and the Ardennes.

British Prime Minister Boris Johnson, like Trump and Bolsonaro, gave the impression that Covid-19 was a bad case of influenza and even bragged about shaking hands with people, including coronavirus patients, because of his role as a politician. That was before March 27, when Johnson entered self-isolation after he tested positive for the coronavirus. Johnson was later admitted to the intensive care unit of a National Health Service (NHS) hospital. Johnson, who mocked the seriousness of Covid-19 and the NHS, became a bit more empathetic after he nearly died from the virus and was saved by NHS medical personnel. Johnson and his fiancée gave their newly-born son the middle name of Nicholas in honor of the two NHS doctors, Drs. Nicholas Hart and Nicholas Price, who helped save his life. Johnson’s token empathy for coronavirus sufferers is in marked contrast to that of Trump and the even more despicable Brazilian president, Jair Bolsonaro, who has done everything possible to set the worst possible example in encouraging Brazilians to ignore public health restrictions.

Trump’s vile lack of empathy for those whose lives have been disrupted by Covid-19 stands in sharp contrast to another American president. In April 1980, while facing a tough re-election campaign, Carter paid a visit to Brooke Army Medical Center near San Antonio, Texas to visit injured U.S. servicemen who had taken part in a failed mission to rescue U.S. embassy hostages in Iran. Four of the military men had been horribly burned during the mission and were in the Army’s special unit for burn victims. Carter had no problem donning a white hospital gown and a mask in order to talk with the burn victims at their bedsides. Moreover, Carter did not want the press to be aware of his visit, something that shocked his campaign advisers.

Carter displayed more empathy in a single day in 1980 spent with the injured military personnel than Trump has in his entire life. And Carter had no problem suiting up in hospital personal protective gear to protect the servicemen from an infection. In fact, Trump should not even be mentioned in the same sentence as the selfish and self-aggrandizing Trump. One is a Christian, who, at the age of 95, continues to practice his faith daily. The other is a false Christian who is supported by an array of self-professed charlatan television evangelists who, like Trump, only know the religion of fraud, grifting, skimming, and fakery.

One U.S. president, who knew a thing or two about leadership U.S. Army-style was Dwight D. Eisenhower. One of Eisenhower’s principles was not claiming to know everything. Trump, on the other hand, believes he knows everything. Eisenhower wrote in his book, “At Ease: Stories I Tell My Friends,” “Always try to associate yourself with and learn as much as you can from those who know more than you do, who do better than you, who see more clearly than you.” Just an ounce of that advice might have prevented the United States from catapulting to a Covid-19 death rate of well over 100,000 in the next few months.

Some historians have argued that Warren Harding, who died in office, ranked at the very bottom of the list of U.S. presidents, especially when it comes to integrity. That was perhaps the case until Trump was elected. Harding, a newspaper publisher, had empathy for others, a trait not found in Trump. Harding was also a humble man, who once said, “I am a man of limited talents from a small town.”

Some historians argue that Ronald Reagan, who brought all sorts of right-wingers into his administration, helped bring about the Trump administration nearly two decades later. While some of that is certainly true, Reagan did possess the quality of empathy. That was on display in 1985 in his memorable and soothing speech made after the loss of the crew of the Challenger space shuttle. Reagan had a habit of writing personal checks for as much as $4000 and $5000 dollars to people who were in financial need. He also never wanted his monetary gifts made public, telling one of his aides, “I was poor myself.” The only other recent president, who matched Reagan’s empathy by sending those in need personal checks, was Barack Obama.

During Britain’s “darkest hour” that followed the fall of France in 1940, British Prime Minister Winston Churchill would often disappear from his secure location in the Cabinet War Room bunkers under the streets of London to mingle with ordinary Londoners in various neighborhoods in the British capital. Churchill placed as much interest in what the common folk thought as he did in the opinions of his political and military advisers. The reason was that Churchill, like other successful leaders, had empathy.

Empathetic leaders are not merely found in the history of the United States and Europe. For every selfish and uncaring Bolsonaro, Latin America has produced scores of empathetic leaders, people who understood poverty and the needs of their citizens: Hugo Chavez of Venezuela, Jose “Pepe” Mujica of Uruguay, Joao Goulart, Luiz Inácio Lula da Silva and Dilma Rousseff of Brazil, Nestor and Cristina Kirchner of Argentina, Salvador Allende of Chile, Evo Morales of Bolivia, and others.

Empathy. Carter, Eisenhower, Reagan, Harding, and Churchill, as well as other U.S. and world leaders had it. Trump never has and never will experience empathy and thousands of Americans and others have died and are dying because of it.