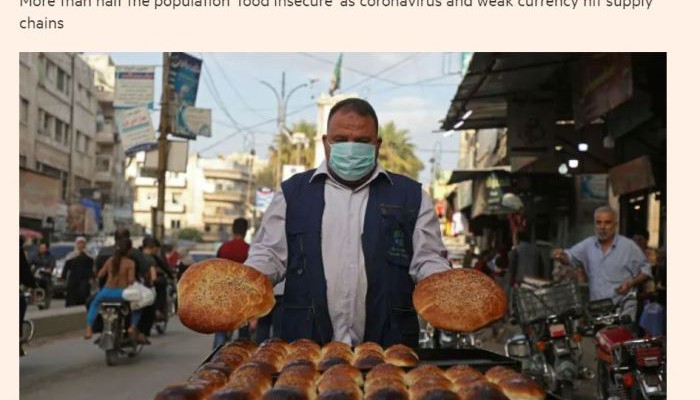 From the FT article:

“Food prices in Syria have risen to their highest levels since conflict erupted nine years ago, putting more than half the country’s population at risk of hunger, aid workers and economists have warned.”

“Meanwhile, homegrown food production is at risk, as Syria’s farmers face rising costs for fertiliser, pesticides and fuel. While crop production rebounded last year, wheat production was still about half its prewar figure. The US Department of Agriculture projects that Syria’s wheat production in May will fall 6.25 per cent year on year.”

“The Lebanese banking lockdown “killed all the economic activity in Syria”, said Mr Aita. “My concern is that the Syrian people are going to end in catastrophe.”

This twisted FT article does not once mention the US Coalition war on wheat in Syria, the torching of wheat and barley crops by the assorted terrorist and proxy contra gangs that are destroying Syria’s ability to maintain self-sufficiency.

FT does not investigate the Lebanese economic crisis nor does it admit that it was very likely orchestrated by the enemies of Syria to ensure a financial freefall that would irreperably damage the strongest allies of Palestine in the region and protect the security of the non-state of Israel.

I am working on a series for Mint Press News, part one will be published next week – covering the US Coalition barbaric measures and collective punishment of the Syrian people under cover of an alleged “global pandemic”.

History repeats itself with depressing regularity – the world should sanction the US.