HOME / WORLD / Why is the US Still Sanctioning Syria? 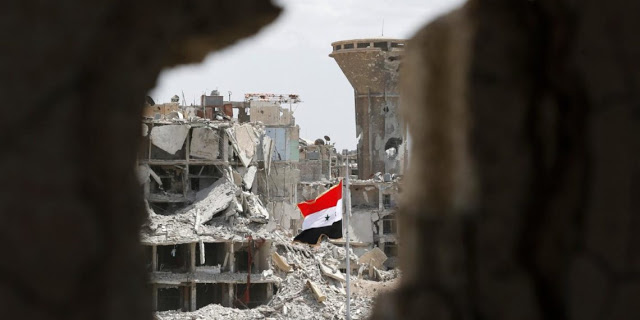 Chinese media highlighted a recent plea by Beijing to the US to lift sanctions against Syria.

A Chinese envoy on Tuesday asked the United States to immediately lift unilateral sanctions against Syria.

Years of economic blockade have caused tremendous hardships to the Syrian people, in particular women and children. The sufferings caused by the devaluation of the Syrian currency and soaring commodities prices, including food prices, fall heavily on civilians across the country, said Zhang Jun, China’s permanent representative to the United Nations.

US sanctions against Syria have long since outlived the alleged motivation for America’s involvement in the conflict – claims of supporting the democratic aspirations of the Syrian people and opposing alleged human rights violations by the Syrian government.

It has been indisputably revealed that the US deliberately engineered the conflict – from organizing protests before 2011 to arming and deploying militants to the country to shift 2011 street protests into a destructive proxy war. It has also long been revealed that so-called “freedom fighters” were in fact extremists drawn from various terrorist organizations including Al Qaeda and its many franchises.

Since Syria’s security operations were in response to what is now revealed to have been US aggression-by-proxy and eventually direct US military aggression against the Syrian government – the sanctions themselves are revealed to be merely an economic component to US attempts to decimate the Syrian nation – not in any way aid or assist the Syrian people.

And of course US sanctions against Syria have complicated the lives of all Syrians – from the vast majority who remained in support of the Syrian government and lived in government-controlled areas of Syria throughout the conflict to even US-backed militants who eventually turn in their arms and surrender to government forces – they all collectively face economic hardship and a difficult road ahead in rebuilding their nation.

Thus the altruistic excuses the US used to first impose sanctions on Syria and its increasingly feeble excuses used to continue justifying them now are revealed as little more than propaganda and should be taken into consideration when questioning why the US has imposed sanctions on other nations.

The US engineered and executed what was a humanitarian catastrophe in Syria – one that it is still actively attempting to perpetuate for as long as possible and one now admittedly perpetuated to “make it a quagmire for the Russians.” Not only is Washington’s “humanitarian” justification for placing sanctions on Syria revealed as empty, but it is Washington itself who is guilty of trampling human rights in Syria.

China – and many others for that matter – have asked for these sanctions to be lifted. Washington – to no one’s surprise refuses – but the inability of so-called “international” institutions to hold Washington accountable or to alleviate Syria’s current crisis reveals that the “international order” these institutions serve is dysfunctional and that alternatives desperately need to be found.

China’s economic aid and efforts to reconstruct Syria will eventually be realized – it is only a matter of time and how China will get around US sanctions.

This will be done either by directly opposing them or creating global systems that are entirely independent of and insulated from American interference. Either way – if Washington insists on maintaining its current policies – a global system independent of and insulated from America is one in which America finds itself cutoff and withering – a prospect that benefits neither the American people nor even America’s ruling special interests.

0 thoughts on “Why is the US Still Sanctioning Syria?”