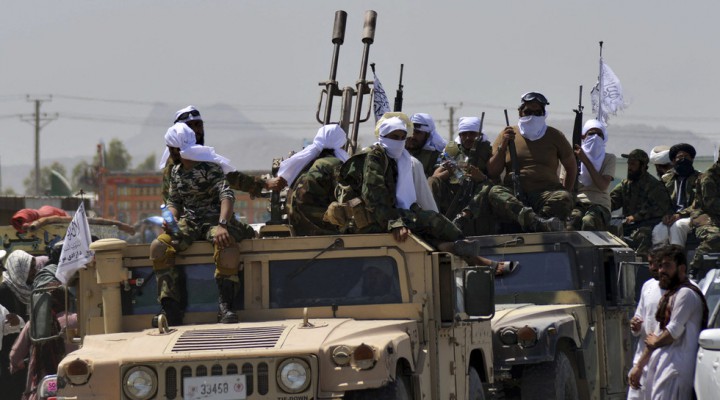 As the rest of the world seeks to navigate a fresh course when it comes to dealing with the reality of a Taliban-led Afghanistan, the US finds itself worrying about a non-existent threat from Al-Qaeda.

There’s an old saying, “once bitten, twice shy,” that captures the uncertainty of a person who has suffered through a bad experience, only to find his or herself once again on a path they believe is leading to a similar ordeal. This idiom captures the essence of current US thinking about Al-Qaeda and Afghanistan today.

In testimony delivered before the National Security Summit, a bevy of US national security and foreign policy officials offered up their assessments as to what the future held for the terrorist organization that was responsible for the 9/11 attacks on the US that destroyed the World Trade Center, damaged the Pentagon, and killed nearly 3,000 civilians. The US concerns about Al-Qaeda were projected through a policy prism, heavily influenced by the fact that the summit took place on the heels of both the 20th anniversary of the terrorist attack and a humiliating departure from Afghanistan by the US and its allies following the seizure of that country by the Taliban.

There’s an old saying, “once bitten, twice shy,” that captures the uncertainty of a person who has suffered through a bad experience, only to find his or herself once again on a path they believe is leading to a similar ordeal. This idiom captures the essence of current US thinking about Al-Qaeda and Afghanistan today.

In testimony delivered before the National Security Summit, a bevy of US national security and foreign policy officials offered up their assessments as to what the future held for the terrorist organization that was responsible for the 9/11 attacks on the US that destroyed the World Trade Center, damaged the Pentagon, and killed nearly 3,000 civilians. The US concerns about Al-Qaeda were projected through a policy prism, heavily influenced by the fact that the summit took place on the heels of both the 20th anniversary of the terrorist attack and a humiliating departure from Afghanistan by the US and its allies following the seizure of that country by the Taliban.

The US invaded Afghanistan in October 2001, barely one month after the 9/11 attacks, initiating a 20-year occupation which saw the US declare war on both Al-Qaeda and the Taliban. The prevailing wisdom at the time was that the Taliban had provided Al-Qaeda with a haven from which it was able to plan and organize the 9/11 attacks, and as such had become a co-conspirator that needed to be eradicated.

The victory of the Taliban has raised concerns among US officials that Afghanistan could once again become a base of operations for Al-Qaeda that would put the US homeland at risk of attack. This even though the Taliban, as part of a peace agreement negotiated in February 2020, had provided assurances that under their rule Afghanistan would never again play host to foreign terrorist organizations such as Al-Qaeda.

The threat picture presented by the US government, however, is quite muted when compared to the New York Times headline. While Secretary of State Antony Blinken testified that the ties between Al-Qaeda and the Taliban have “not been severed,”Avril Haines, the director of national intelligence, noted that Afghanistan, even under the Taliban, did not rise to the threat level presented by other nations such as Yemen, Somalia, Iraq, and Syria.David Cohen, the deputy director of the CIA, testified that his organization is actively monitoring the situation in Taliban-controlled Afghanistan for “some potential movement of Al-Qaeda to Afghanistan,” whileLieutenant General Scott Berrier, the director of the Defense Intelligence Agency, assessed that it would take Al-Qaeda between one and two years to rebuild capability inside Afghanistan that would enable it to threaten the US homeland.

One must keep in mind that the current assessment is being made following a 20-year conflict in which the US previously claimed to have all but eliminated Al-Qaeda from Afghanistan. In May 2009, for instance, General David Petraeus, who at the time was serving as the commander of Central Command, responsible for all US forces operating inside Afghanistan, noted that while Al-Qaeda and its affiliates may have “enclaves and sanctuaries” remaining inside Afghanistan, the terrorist group had suffered “very significant losses,” allowing Petraeus to echo then-Afghan President Hamid Karzai’s assessment that Al-Qaeda was no longer based in Afg  hanistan.

Petraeus’assessment was seconded by General James Jones, President Barack Obama’s national security advisor, in October 2009. Jones stated that the US believed there were fewer than 100 Al-Qaeda operatives left inside Afghanistan, and that the leadership of Al-Qaeda was based across the border, in the tribal areas of Pakistan.

Jones’ assessment was mirrored by then-CIA Director Leon Panetta, who estimated that there were only some “50 to 100 Al-Qaeda” operatives based in all of Afghanistan. Following a US-led assault on Al-Qaeda-affiliated training camps operating in Kandahar Province in October 2015, resulting in some 100 fighters being killed and another 50 wounded, analysts (and the media) used the claimed information as evidence that the US intelligence community was deliberately downplaying the true size of Al-Qaeda inside Afghanistan. The reality, however, was that the US strikes had hit an Afghan Baluchi resistance group allied with the Taliban, called Junood al Fida. While the leadership of Junood al Fida had sworn its loyalty to Al-Qaeda, the organization was not part of any larger Al-Qaeda effort to attack the US, but rather a more localized effort focused on driving the US out of Afghanistan.

Currently, there is little evidence that the organization responsible for the 9/11 exists in any meaningful form on Afghanistan soil. The original Al-Qaeda brand (i.e., those loyal to Osama Bin Laden), which was indeed plotting to carry out attacks against the US as late as 2016, appears to have been largely annihilated by the US through a program of targeted assassinations using drone strikes and special operations forces. The variant of Al-Qaeda most prominent inside Afghanistan belongs to an off-shoot, Al-Qaeda in the Indian Subcontinent (AQIS), and appears to be closely allied with Taliban objectives inside Afghanistan. AQIS’ members were – and are – focused on training with and fighting alongside the Taliban to evict American forces from Afghanistan. These fighters, few in number, live along the Afghan tribes and villages. While the efficacy of their support to the Taliban is unknown, it can be safely said that they pose absolutely no threat to the US.

When viewed in this light, US claims that Al-Qaeda is seeking to rebuild itself as an Afghan-based entity capable of striking targets in the US homeland inside of two years are pure fantasy. The Taliban is an umbrella organization which has incorporated a number of resistance movements dedicated to the ousting of the US from Afghanistan. These groups include former members of Al-Qaeda who have intermarried into Afghan tribes, as well as followers of the existing Al-Qaeda leadership who have aligned themselves with the Taliban during the final campaign to evict the US and NATO forces.

When the Taliban, as part of the February 2020 peace agreement, promised not to target US and NATO forces so long as they kept to the agreed-upon timetable of May 2021 for the final evacuation of foreign troops, they kept their word. Even when Biden broke this agreement, the Taliban, in subsequent negotiations, agreed to extend the moratorium of attacking US and foreign troops to a new deadline of August 31, 2021. The Taliban kept their word. The Taliban, moreover, have promised not to allow Afghan soil to be used as a base from which terrorist organizations could plot and implement a new series of attacks against the US homeland.

It is far too early to determine whether the Taliban will keep their word. However, there is every reason to believe that the Taliban will do everything possible to defeat one known anti-US terrorist group, the Islamic State-Khorasan Province, operating inside Afghanistan, which claimed responsibility for the August attack near Kabul airport. The Taliban has a history of conducting brutal operations to eradicate IS-KP (also known as ISIS-K) from Afghanistan. Given that the Taliban is committed to imprinting its brand of Islamic government on all of Afghanistan, the likelihood that it will find common cause with IS-KP is nil.

The Taliban has stated that it seeks a more inclusive, moderate form of Islamic government going forward, having learned the lessons of the past, where Taliban intolerance helped cement widespread Afghan opposition to its cause. Today the Taliban seeks foreign recognition and the economic investments such recognition brings. The last thing the Taliban would be seeking to do today is resurrect the memories of the past, including the kind of tolerance of foreign Al-Qaeda operatives plotting attacks on the US that triggered the US invasion and occupation in the first place.

Second, having witnessed the consequences of downplaying the threat posed by Al-Qaeda to the US homeland in the leadup to the 9/11 attacks, no US official or agency will ever allow its assessment of the potential threat posed by Al-Qaeda to provide any wiggle room for armchair quarterbacking by critics should another attack ever occur – everyone wants to be in the position of saying “I told you so.” As such, an Al-Qaeda threat will be claimed even when no data exists to support this assessment.

“Once bitten, twice shy” is becoming the new mantra of the US government when it comes to Taliban-controlled Afghanistan. This kind of manufactured/exaggerated threat projection, however, while offering cover when it comes to potential domestic political blame games, will serve to freeze the US out of the kind of hands-on diplomacy that the US should be engaged in with Afghanistan today, ceding the reconstruction of Afghanistan and all that follows to Russia, China, Iran, and others.