HOME / WORLD / Are Russian-Taliban Ties Changing For The Worse? 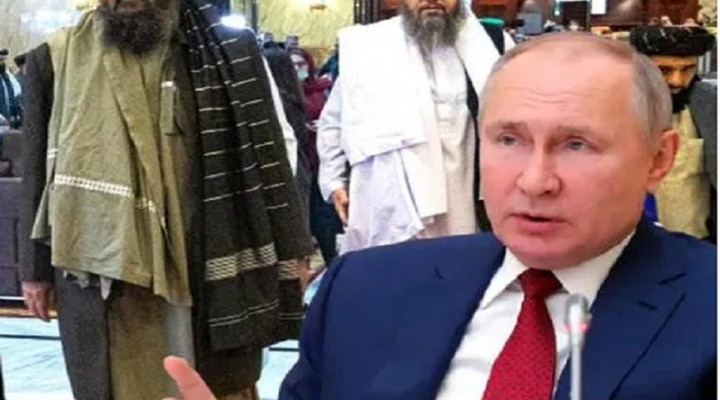 Observers must avoid over-exaggerating their ties by claiming that they’re either much worse or better than they really are. They’re simply becoming ‘normal’, which is natural after a length of time and understandably includes constructive critiques.

Russian-Taliban ties have always been the subject of much intrigue, mostly because the Kremlin neglected to clearly articulate their nature over the past two and a half years until only recently, and even then it was largely insufficient for counteracting the confusion. Moscow officially regards the group as terrorists but still pragmatically engages with it in the interests of peace and security. Russian liberals and their foreign-financed “opposition’s” American patrons have tried to spin those ties in an attempt to discredit the Kremlin, though with little success. The world has generally come to acknowledge that Russia’s pragmatic policy resulted it becoming one of the most influential countries in post-withdrawal Afghanistan alongside Pakistan and China.

Despite this, confusion still abounds about the state of bilateral affairs, let alone what comes next, and recent statements by Russian officials have inadvertently contributed to this. Russian Foreign Ministry spokeswoman Maria Zakharova earlier said that her country might formally recognize Afghanistan’s new de facto authorities after they form a government, but following its acting appointments earlier in the week, this has yet to happen. There are two reasons why: first, the process isn’t yet fully completed and is still a work in progress; and second, Russia dislikes the lack of inclusiveness since all ethno-political forces aren’t represented.

A stream of developments followed later in the week which exacerbated the prevailing confusion. Speaker of the Federation Council Valentina Matviyenko told TASS that the Russian Ambassador to Afghanistan would represent her country at the Taliban’s planned inauguration ceremony, but then the Taliban began wavering about the date of that event which was reportedly supposed to happen on the 20th anniversary of the 9/11 terrorist attacks. Russian presidential spokesman Dmitry Peskov refused to comment on that provocative date, strongly implying how uncomfortable the Kremlin was with those reports.

Mrs. Zakharova then clarified the next day that Russia only has working contacts with the Taliban at the embassy level and that “Honestly speaking, there are no plans for other contacts or talks.” This was followed by Mr. Peskov saying that “We don’t know how the situation will develop [with drugs and terrorism]. This is precisely why we are saying that it is important for us to understand what are the first and the subsequent steps of Afghanistan’s current leadership.” He also added that the Taliban’s victory benefited no one, echoing Deputy Foreign Minister Sergey Ryabkov’s earlier remarks, since drugs and terrorism still remain regional challenges.

That same day, the Taliban then announced that its planned inauguration ceremony was canceled less than 24 hours before it was reportedly supposed to be held, claiming that the decision was actually made a few days prior and that the earlier reports about it being planned for 9/11 were false. Russian Foreign Minister Sergey Lavrov had a few words to say about all of that. He confirmed that the Russian Ambassador was originally supposed to represent Moscow there but then rejected media reports that his country “refused” to attend the rumored ceremony on 9/11 prior to its cancellation by saying that “There simply will be no inauguration.”

Russia’s top diplomat also said that “I think it is an obvious problem that they [the Taliban] are still undecided about what they should do first. There are no behind-the-scenes games or disputes…(but they) change their plans every day, including concerning the inclusiveness of the political process” and the government inauguration ceremony. This was the sharpest and most authoritative criticism of the Taliban by Russia since they swept back to power. It shows that Russia is becoming comfortable enough with its ties with the Taliban to publicly critique the group, albeit in a diplomatic way in order to avoid offending its sensitivities.

All of this confused many observers though since those who’d previously been ignorant of Russian-Taliban ties had abruptly flipped to the opposite extreme of overestimating them once these relations became impossible to ignore only to then find out that Foreign Minister Lavrov was publicly critiquing them after they canceled their inauguration ceremony that was reportedly supposed to be held on the provocative date of 9/11. As could have been expected, this prompted a new wave of speculation about Russian-Taliban ties, with some now claiming that Moscow’s stance towards the group has changed for the worse.

What’s really happening is that their relations are maturing and becoming comparatively more “normal” in the sense that whatever so-called “honeymoon phase” some might have thought they were earlier in is now definitely over. The reason for this is that the Taliban’s acting appointments failed to be inclusive like the group previously promised and the reported 9/11 inauguration ceremony created an international soft power fiasco for those like Russia who were invited to attend. Even so, Russian-Taliban ties remain pragmatic and haven’t worsened.

Foreign Minister Lavrov said that “the ‘combat-capable’ members of the (embassy) team are there, they are providing us with very useful information that we rely on during contacts with our foreign partners.” This confirms that they’re still on talking terms despite what some speculated amid last week’s confusion about their relations stemming from the provocative inauguration ceremony reports. Observers must avoid over-exaggerating their ties by claiming that they’re either much worse or better than they really are. They’re simply becoming “normal”, which is natural after a length of time and understandably includes constructive critiques.

Analyzing this evolution in light of last week’s confusion, it certainly does appear as though Russia isn’t happy with the way that the Taliban are managing everything. Moscow dislikes the acting government’s lack of inclusiveness and felt very uncomfortable about the now-canceled inauguration ceremony’s rumored plans to be held on 9/11. Had that event went through like some reported that it might have, then Russia would have been put in a dilemma whereby it would have had to choose between offending the Taliban by declining the invitation to participate or risk self-inflicted damage its soft power by appearing insensitive on 9/11.

Considering Russia’s comparative influence over the Taliban together with its Chinese and Pakistani partners’, it’s certainly probable that they collectively encouraged the group to scrap its rumored plans despite its spokesman denying that the inauguration ceremony was ever seriously considered for 9/11. Should that end up being an accurate interpretation of events, then it would actually speak to the positive role that Russia and its two top partners in this crisis are playing, even if it still remains largely limited since they were unable to convince the Taliban to be more inclusive with its acting appointments.

Going forward, the de facto “normalization” of Russian-Taliban relations will likely see more such constructive critiques in the future, especially since Moscow has to balance its interests in Afghanistan with those of its mutual security ally Tajikistan. That country’s government is coming under considerable pressure from its people to response to the growing refugee crisis as well as the Taliban’s reported mistreatment of Afghanistan’s influential Tajik minority. Tajikistan’s Russian patron therefore cannot be seen as “endorsing” the acting government’s uninclusive composition since this could provoke Russophobia within that strategic country.

At the same time, however, Russia also can’t be seen as publicly pressuring the Taliban lest this worsen their relations and lead to accusations that Moscow was hypocritical for condemning Washington’s two-decade-long political meddling in Afghanistan only to shortly thereafter appear to be doing the same thing by trying to force that country to accommodate the Kremlin’s domestic political preferences there. This tricky balancing act will therefore require the best of Russian diplomacy in order to succeed and not inadvertently backfire, though thankfully Foreign Minister Lavrov reaffirmed that “combat-capable” diplomats are actively working on this.

0 thoughts on “Are Russian-Taliban Ties Changing For The Worse?”