HOME / WORLD / Ukraine War Has No End in Sight

Ukraine War Has No End in Sight 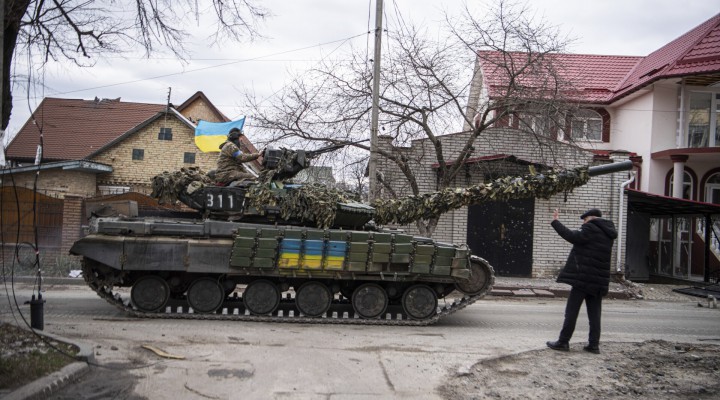 Russia’s invasion of Ukraine is grinding its way toward its inevitable conclusion, namely Russian control over the Donbas region. But this will not end the conflict between Russia and Ukraine, which has expanded in scope and scale beyond the capabilities of the Russian military resources originally allocated. With no diplomatic off-ramp on the horizon, the war risks becoming a permanent state of conflict between Russia and Ukraine — with unknown consequences.

As the Ukraine conflict enters its third month, the Kremlin looks likely to achieve its major military objective of securing physical control over the eastern Donbas region. Peripheral territorial acquisition of the strategic southern city of Kherson, as well as a swath of territory connecting Crimea to the Donbas and the border of the Russian Federation, also looks likely.

This will, however, fall short of expectations by both Russia and many military observers when the war began. Perhaps the greatest contributor is what appears to be a massive Russian intelligence failure over prewar assessments that organized resistance by Ukraine would be limited and easily overcome. Instead, the Russians were met by an organized, capable and determined Ukrainian military that has shown great resilience in defending against Russian attack. Instead of a quick campaign of less than a month, Russia found itself in a drawn-out fight that required its military to alter its approach — pulling back from supporting attacks against Kyiv and Odessa in favor of a more singular focus on eastern Ukraine.

The failure of the invasion to deliver a knockout blow to the Ukrainian government has altered the political-military landscape in ways that neither Russia nor Nato predicted. First and foremost, the stated Russian political objective — securing a neutral Ukraine — has not been accomplished and, given the limited military resources Russia has dedicated to date, is unlikely to be realized under current circumstances.

While it seems clear that Ukraine will not be formally joining Nato any time soon, if ever, the reality is that the war has reforged the relationship between Ukraine and the trans-Atlantic alliance in a way that transforms the way the two entities work together. Ukraine’s current status as a wartime non-Nato ally has strengthened a long-held goal of the US and Nato of neutralizing Russia as a long-term military threat to Europe — in short, by transforming Ukraine’s military into a de facto Nato proxy.

Nato’s decision to arm Ukraine, combined with the willingness of several Nato nations to allow their territory to be used for training, has provided the Ukrainian military with the kind of strategic depth that was unimaginable when the war began on Feb. 24. The transition from supplying light anti-armor and anti-aircraft missiles to heavy weaponry such as artillery and armor has also enabled Ukraine to begin the process of reconstituting the heavy brigades that Russia is destroying in eastern Ukraine.

The creation of an impregnable Ukrainian strategic rear is a game changer. First and foremost, it provides Ukraine with the means to rearm, refit and re-equip its forces to Nato standards without fear of Russian intervention. This not only counters Russia’s stated military objective of “demilitarization” of Ukraine’s forces, but also steels the resolve of the Ukrainian government to reject any settlement that obliges them to embrace neutrality in perpetuity.

Russia’s efforts to disrupt the injection of Nato-provided supplies and material have proven haphazard at best. While warehouses containing military equipment have been identified and destroyed, Ukrainian units equipped with the latest US and Nato weapons are still appearing on the front lines. Likewise, while Russia has targeted Ukraine’s petroleum refining and storage capacity, the continued provision by Nato countries of refined petroleum products allows the Ukrainian military to remain mechanized. In short, while Russia will likely accomplish the objective of securing the Donbas and associated regions, unless it is willing to expand the scope and scale of its current interdiction efforts, it will not be able to bring to a successful conclusion its state of war with Ukraine.

There currently is no identifiable diplomatic off-ramp for either Ukraine or Russia to end the conflict. Rather, all existing trends point to continued escalation. While Ukraine and Nato have constructed the strategic depth to allow Ukraine’s continued resistance, Russia’s current military configuration remains inadequate to the task of matching this mobilization. As things stand, the best Russia can hope for is a permanent state of conflict with Ukraine — which would accomplish the US goal of “weakening” Russia.

Add in expected pressures on Russia from Nato expansion in northern Europe (Finland and Sweden), and rising tensions involving Transnistria (a pro-Russian breakaway state between Ukraine and Moldova), and the current situation appears untenable for Russia without a broader mobilization of its military resources. While the outcome of any such action is impossible to predict, one thing is sure: Neither Russia nor Nato knows where and how such escalation would end.

One thought on “Ukraine War Has No End in Sight”