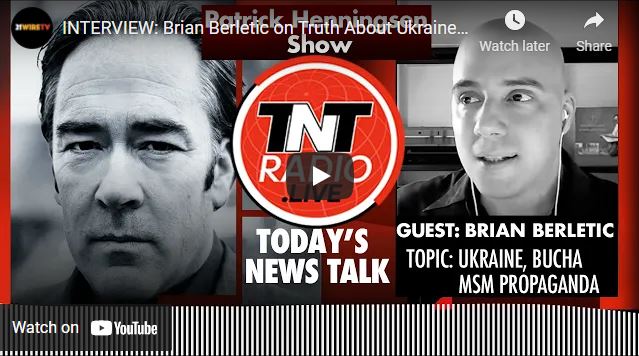 In this episode of the Patrick Hennningsen Show on TNT Radio airing on April 26, 2022, host Patrick talks with Asia-based American journalist and global affairs analyst Brian Berletic from The New Atlas, to discuss the Ukraine Conflict and how western governments and media promulgate propaganda, false narratives and actual disinformation in and around war zones.

We also look at the forensic case surrounding the reported ‘Bucha Massacre’ and explore an alternative hypothesis to the official western media narrative. What really happened? Will we even find out? In the past, similar such events have been used by western governments to justify reactionary policies like sanctions against adversaries like Russia, and used by NATO to build a case to keep the current proxy war going, indefinitely.