HOME / WORLD / Death by a thousand cuts: where is the west’s Ukraine strategy? 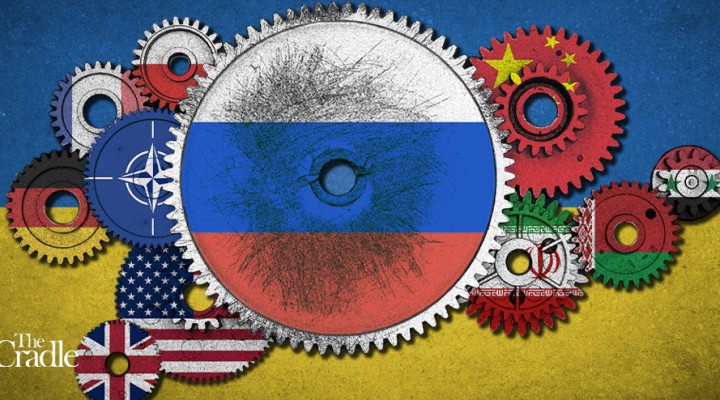 The pounding, daily western narratives on ‘Ukrainian wins’ and ‘Russian losses’ underpins the lack of an actual, cohesive Grand Strategy against Moscow.

While we are all familiar with Sun Tzu, the Chinese general, military strategist and philosopher who penned the incomparable Art of War, less known is the Strategikon, the Byzantium equivalent on warfare.

Sixth century Byzantium really needed a manual, threatened as it was from the east, successively by Sassanid Persia, Arabs and Turks, and from the north, by waves of steppe invaders, Huns, Avars, Bulgars, semi-nomadic Turkic Pechenegs and Magyars.

Byzantium could not prevail just by following the classic pattern of Roman Empire raw power – they simply didn’t have the means for it.

So military force needed to be subordinate to diplomacy, a less costly means of avoiding or resolving conflict. And here we can make a fascinating connection with today’s Russia, led by President Vladimir Putin and his diplomacy chief Sergei Lavrov.

But when military means became necessary for Byzantium – as in Russia’s Operation Z – it was preferable to use weaponry to contain or punish adversaries, instead of attacking with full force.

Strategic primacy, for Byzantium, more than diplomatic or military, was a psychological affair. The word Strategia itself is derived from the Greek strategos – which does not mean “General” in military terms, as the west believes, but historically corresponds to a managerial politico-military function.

But brilliant tactics, excellent operative intel and even massive victories in a larger war theater cannot compensate for a lethal mistake in terms of grand strategy. Just look at the Nazis in WWII.

Those who built up an empire such as the Romans, or maintained one for centuries like the Byzantines, never succeeded without following this logic.

Those clueless Pentagon and CIA ‘experts’

On Operation Z, the Russians revel in total strategic ambiguity, which has the collective west completely discombobulated. The Pentagon does not have the necessary intellectual firepower to out-smart the Russian General Staff. Only a few outliers understand that this is not a war – since the Ukraine Armed Forces have been irretrievably routed – but actually what Russian military and naval expert Andrei Martyanov calls a “combined arms police operation,” a work-in-progress on demilitarization and denazification.

The US Central Intelligence Agency (CIA) is even more abysmal in terms of getting everything wrong, as recently demonstrated by its chief Avril Haines during her questioning on Capitol Hill. History shows that the CIA strategically blew it all the way from Vietnam to Afghanistan and Iraq. Ukraine is no different.

Ukraine was never about a military win. What is being accomplished is the slow, painful destruction of the European Union (EU) economy, coupled with extraordinary weapons profits for the western military-industrial complex and creeping security rule by those nations’ political elites.

The latter, in turn, have been totally baffled by Russia’s C4ISR (Command, Control, Communications, Computers, Intelligence, Surveillance and Reconnaissance) capabilities, coupled with the stunning inefficiency of their own constellation of Javelins, NLAWs, Stingers and Turkish Bayraktar drones.

This ignorance reaches way beyond tactics and the operational and strategic realm. As Martyanov delightfully points out, they “wouldn’t know what hit them on the modern battlefield with near-peer, forget about peer.”

The caliber of ‘strategic’ advice from the NATO realm was self-evident in the Serpent Island fiasco – a direct order issued by British ‘consultants’ to Ukraine’s President Volodymyr Zelensky. The Commander-in-Chief of the Armed Forces of Ukraine, Valery Zaluzhny, thought the whole thing was suicidal. He was proven right.

All the Russians had to do was launch a few choice anti-ship and surface Onyx missiles from bastions stationed in Crimea on airports south of Odessa. In no time, Serpent Island was back under Russian control – even as high-ranking British and American marine officers ‘disappeared’ during the Ukrainian landing on the island. They were the ‘strategic’ NATO actors on the spot, doling out the lousy advice.

Russian forces, meanwhile, have brought diplomacy to the battlefield, handing over 10 tons of humanitarian assistance to the people of liberated Kherson – with the deputy head of the military-civil administration of the region, Kirill Stremousov, announcing that Kherson wants to become part of the Russian Federation.

In parallel, Georgy Muradov, deputy prime minister of the government of Crimea, has “no doubts that the liberated territories of the south of the former Ukraine will become another region of Russia. This, as we assess from our communication with the inhabitants of the region, is the will of the people themselves, most of whom lived for eight years under conditions of repression and bullying by the Ukronazis.”

Denis Pushilin, the head of the Donetsk People’s Republic, is adamant that the DPR is on the verge of liberating “its territories within constitutional borders,” and then a referendum on joining Russia will take place. When it comes to the Luhansk People’s Republic, the integration process may even come earlier: the only area left to be liberated is the urban region of Lysychansk-Severodonetsk.

The ‘Stalingrad of Donbass’

As much as there’s an energetic debate among the best Russian analysts about the pace of Operation Z, Russian military planning proceeds methodically, as if taking all the time it needs to solidify facts on the ground.

Arguably the best example is the fate of Azov neo-Nazis at Azovstal in Mariupol – the best-equipped unit of the Ukrainians, hands down. In the end they were totally outmatched by anumerically inferior Russian/Chechen Spetsnaz contingent, and in record time for such a big city.

Another example is the advance on Izyum, in the Kharkov region – a key bridgehead in the frontline. The Russian Ministry of Defense follows the pattern of grinding the enemy while slowly advancing; if they face serious resistance, they stop and smash the Ukrainian defensive lines with non-stop missile and artillery strikes.

Popasnaya in Luhansk, dubbed by many Russian analysts as “Mariupol on steroids”, or “the Stalingrad of Donbass,” is now under total control of the Luhansk People’s Republic, after they managed to breach a de facto fortress with linked underground trenches between most civilian houses. Popasnaya is extremely important strategically, as its capture breaks the first, most powerful line of defense of the Ukrainians in Donbass.

That will probably lead to the next stage, with an offensive on Bakhmut along the H-32 highway. The frontline will be aligned, north to south. Bakhmut will be the key to taking control of the M-03 highway, the main route to Slavyansk from the south.

This is just an illustration of the Russian General Staff applying its trademark, methodical, painstaking strategy, where the main imperative could be defined as a personnel-preserving forward drive. With the added benefit of committing just a fraction of overall Russian firepower.

Russian strategy on the battlefield stands in stark contrast with the EU’s obstinacy in being reduced to the status of an American dog’s lunch, with Brussels leading entire national economies to varying degrees of certified collapse and chaos.

Once again it was up to Russian Foreign Minister Sergei Lavrov – a diplomatic master – to encapsulate it.

Question: “What do you think of Josep Borrell’s (Lavrov’s EU counterpart) initiative to give Ukraine frozen Russian assets as ‘reparations?’ Can we say that the masks have come off and the west is moving on to open robbery?”

Lavrov: “You could say it is theft, which they are not trying to hide … This is becoming a habit for the west … We may soon see the post of the EU chief diplomat abolished because the EU has virtually no foreign policy of its own and acts entirely in solidarity with the approaches imposed by the United States.”

The EU cannot even come up with a strategy to defend its own economic battlefield – just watching as its energy supply is de facto, incrementally turned off by the US. Here we are at the realm where the US tactically excels: economic/financial blackmail. We can’t call these ‘strategic’ moves because they almost always backfire against US hegemonic interests.

Compare it with Russia reaching its biggest surplus in history, with the rise and rise of commodity prices and the upcoming role of the stronger and stronger ruble as a resource-based currency also backed by gold.

Moscow is spending way less than the NATO contingent in the Ukrainian theater. NATO has already wasted $50 billion – and counting – while the Russians spent $4 billion, give or take, and already conquered Mariupol, Berdyansk, Kherson and Melitopol, created a land corridor to Crimea (and secured its water supply), controls the Sea of Azov and its major port city, and liberated strategically vital Volnovakha and Popasnaya in Donbass, as well as Izyum near Kharkov.

That doesn’t even include Russia hurling the entire, collective west into a level of recession not seen since the 1970s.

The Russian strategic victory, as it stands, is military, economic, and may even coalesce geopolitically. Centuries after the Byzantine Strategikon was penned, the Global South would be very much interested in getting acquainted with the 21st century Russian version of the Art of War.

The Drums of War Beat Louder

2 thoughts on “Death by a thousand cuts: where is the west’s Ukraine strategy?”