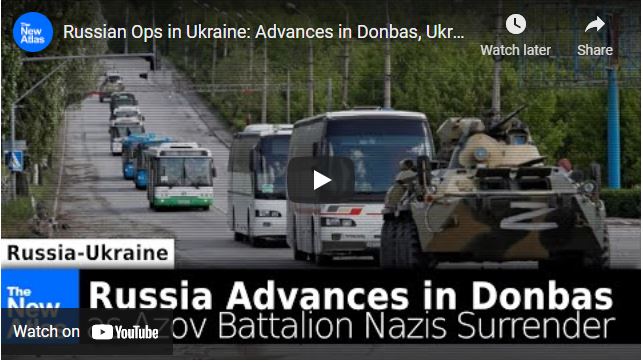 1. Russia continues to make slow and steady progress in Donbas, the primary area of Russia’s focus;

3. Ukrainian “offensive” northeast of Kharkov appears to have been a costly photo-op and little more;

5. Ukrainian militants had long since been out of the fight (since mid to late-April);

6. Pentagon claims most M777 howitzers are already on the front in Kharkov and Donbas;

7. US M777s have yet to make any discernible difference on the battlefield;

8. Pentagon admits Russia still has the majority of its combat power prepared against Ukraine available to it;

US Department of Defense – Senior Defense Official Holds a Background Briefing May 16, 2022:
https://www.defense.gov/News/Transcri…

Institute for the Study of War – RUSSIAN OFFENSIVE CAMPAIGN ASSESSMENT, MAY 16:
https://understandingwar.org/backgrou…

0 thoughts on “Russian Ops in Ukraine: Advances in Donbas, Ukraine Surrenders at Azovstal”