HOME / WORLD / The Trump trap: Biden’s own rhetoric has cornered him into carrying on Trump’s foreign policy 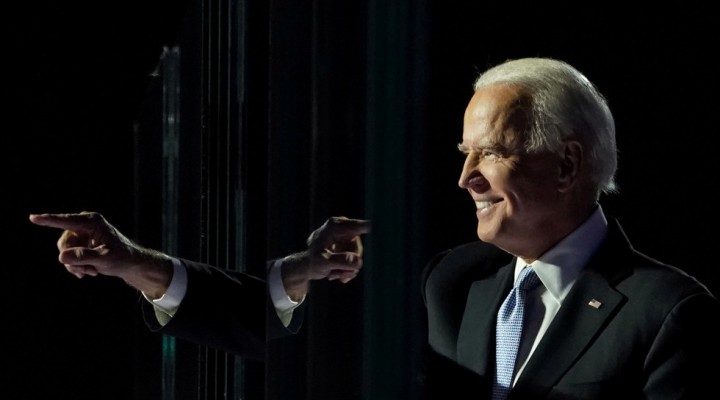 Joe Biden thinks he can save America and the world from four years of Donald Trump. Instead, Biden will find himself in a foreign policy trap where his tough guy rhetoric compels him to finish what Trump started.

If one listens to Joe Biden and his closest national security advisors, all it will take to undo four years of Trump-era foreign policy is a few dozen strokes of the pen. According to the plan, the presumptive president-elect will sign off on a series of executive orders which reverse the course charted by Trump, returning America back to the path of greatness derived from undisputed global leadership that had been the trademark of the Obama years, when Biden reigned as vice president and Barack’s right-hand man.

Rejoining the Paris Climate Accord, the Iran nuclear agreement and the World Health Organization are all actions Biden can take as soon as he takes office. Reversing Trump’s troop withdrawal from Afghanistan and halting the redeployment of US forces from Germany are also high on Biden’s ‘to do’ list. However, simply reversing a decision made over the course of the past four years does not reset the clock; for example, the world has moved on regarding climate change, with nations like China taking the lead in promulgating plans for reaching a “carbon zero” posture by 2060. Biden claims he can do this by 2050, but American domestic political reality, shaped by an economy fine-tuned by Trump and inherently resistant to the kind of economic change that would need to occur to make the Biden climate change plan viable, may have something to say about that timetable.

The Iran nuclear deal finds Biden trapped by his own hardline rhetoric, setting conditions that are as unrealistic as they are unobtainable (for instance, requiring Iran to renegotiate key aspects of the 2015 Joint Comprehensive Plan of Action, or JCPOA, as a pre-condition for the US rejoining that pact). Iran’s foreign minister, Mohammad Javad Zarif, recognizing the bad position Biden’s mouth has placed its owner in, has wisely noted that Iran can return to its JCPOA commitments simply by Biden signing an executive order cancelling the Trump sanctions. This is one executive order Biden likely will not sign, because it requires him to certify the JCPOA as being good as written, something he has already articulated against.

One of the first decisions Biden will be compelled to make upon assuming the presidency is how to proceed on the issue of US troops in Afghanistan. If the Trump reductions are completed as planned by January 15 (a big ‘if’, given the proclivity of the US military to lie to Trump about actual troop deployments), Biden will be pressured by the Pentagon to immediately redeploy up to 5,000 troops in order to create the force structure the Pentagon believes necessary to ensure stability while Afghanistan transitions to peace. This, of course, would kill the peace plan the US has in place with the Taliban, setting the stage for even more ‘forever war’.

Other regional issues jump out – the ongoing effort to oust Nicolas Maduro in Venezuela, and the ongoing Saudi-led war in Yemen, to name two. Biden’s anti-Maduro rhetoric is every bit as strong as Trump’s, meaning there is little chance of a policy re-direct on this front. Likewise, if Trump fulfils threats to name the Houthi rebels in Yemen as a terrorist organization, it will be difficult for Biden politically to reverse that decision, or else be doing the bidding of Iran. Yemen will become another example of a ‘forever war’ living up to its name.

Another issue Biden will be called upon to deal with is the ongoing American redeployment of troops out of Germany. Trump has committed to sending thousands of these redeployed troops to Poland, a move Biden will have difficulty reversing. In the end, Biden will be pressured to not only halt the withdrawal of US forces from Germany, but also find fresh troops to replace those headed for Poland. But such a commitment must be measured in relation to the ongoing controversy over the Nord Stream 2 gas pipeline connecting Russia with Europe. Trump has put in place sanctions designed to halt the pipeline from being completed; Biden is likewise opposed to the pipeline reaching fruition. Getting Germany to commit to taking in US troops while blatantly interfering with German economic sovereignty is a balancing act Biden may not be up to carrying out.

Likewise, Biden has indicated that he would be inclined to sign an extension to the soon-to-expire New START Treaty. Russia has long insisted that future arms control agreements must consider missile defense issues. The Trump administration has just tested a missile interceptor integral to the Aegis Ashore anti-missile system deployed in Romania and Poland in an anti-intercontinental ballistic missile configuration. The likelihood of Russia agreeing to any new arms control measures without a commitment on the part of a Biden administration to reduce and/or eliminate European-based missile defense systems is zero. So, too, is are the odds of a Biden administration doing away with missile defense in Europe. The result is an expensive arms race at a time when the US can afford it least.

No thaw in the new Cold War

Finally, Biden inherits a policy posture toward both Russia and China which is as hostile a relationship as has existed since the Cold War. Russia’s force posture in Europe is such that NATO would need to spend hundreds of billions of dollars to be in a realistic position to take on the Russian military in any conventional ground war in Europe. Moreover, it is unlikely Europe will agree to either the formal endorsement of such an objective, or the economic commitment needed to underwrite it. Complicating matters further is that China and Russia have reacted to the aggressive policies of the US, which pre-dated the Trump era, by considering the possibility of a formal alliance against what they term “western hegemony.” Such an alliance would complicate any effort on the part of a Biden administration to back up the president-elect’s pusillanimous rhetoric with actual muscle, since any conflict in Europe would automatically trigger a Pacific response, and vice versa.

Regardless of anything else, perhaps the biggest challenge facing a Biden administration will be in dealing with the consequences of Trump’s decision to withdraw from the Obama-era Trans-Pacific Partnership (TPP), an abortive free trade agreement designed to keep China out while promoting American economic leadership. China, together with 14 other Asia-Pacific nations, recently signed what amounts to the world’s largest free trade agreement. The signatories to this agreement, known as the Regional Comprehensive Economic Partnership (RCEP), include the 10 countries comprising the Association of Southeast Asian Nations (ASEAN), along with China, Japan, South Korea, New Zealand, and Australia, and together account for around 30 percent of global GDP. The RCEP cements China’s status as the dominant economic power in the Asia-Pacific regions, and represents a stunning reversal of fortune for the US, whose precipitous withdrawal from the TPP in 2017 paved the way for China’s stunning diplomatic coup.

The collapse of the TPP, when combined with the economic crisis brought on by the Covid-19 pandemic, made the RCEP attractive to nations who looked to trade with China as the only viable means of rebuilding their stricken economies. The RCEP helps solidify the regional geopolitical objectives of the Chinese Belt and Road Initiative by opening the economies of the Asia-Pacific region to Chinese-funded development projects. The diplomatic victory of China in bringing the RCEP to fruition represents a stunning defeat for the US, which had been seeking regional support in its ongoing trade war with China. Moreover, given the linkage between economic and security issues, the fact that major regional allies such as Japan, South Korea, New Zealand and Australia have so decisively joined their economies to China’s undermines ongoing US efforts to build a regional coalition designed to contain and eventually roll-back China’s presence in the South China Sea. While President-elect Joe Biden has reached out to Japan and South Korea in an effort to reassure them of his administration’s commitment to their security, a future Biden administration is ill-positioned to counter the economic influence China has locked itself into through the RCEP. From an economic perspective, the US ‘pivot to Asia’ has been effectively halted, with the Asia-Pacific nations now firmly in China’s court.

From Europe, to South America, the Middle East, Southwest Asia, and on to the Pacific, President Joe Biden will be inheriting a world transformed by four years of Trump policies. While Biden has indicated that he is inclined to reverse many, if not all, of the Trump foreign policy “disasters” as soon as practical after assuming office, the reality is that he will find his hands tied by the combined impact of his own aggressive rhetoric, which in many instances paralleled the policies undertaken by Trump, or the fact that the geopolitical situation that exists today does not permit a return to the foreign policy of yore.

0 thoughts on “The Trump trap: Biden’s own rhetoric has cornered him into carrying on Trump’s foreign policy”