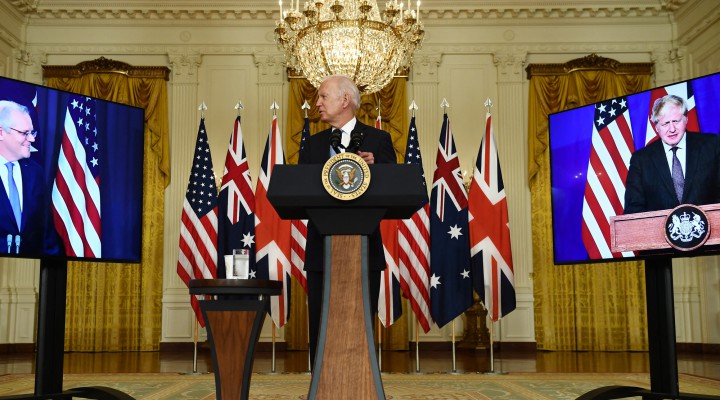 The official reactions to the announcement of the Australian-British-US pact (AUKUS) are only about the termination of the Australian-French arms contract. As terrible as this is for the shipyards, it is only a collateral consequence of a reversal of alliances aimed at preparing for a war against China.

The announcement of the Australian-British-US (A-UK-US) pact [1] was like an earthquake in the Indo-Pacific region.

There is no doubt that Washington is preparing for a long-term military confrontation with China.

Until now, the Western deployment to contain China politically and militarily has involved the United States and the United Kingdom as well as France and Germany. Today, the Europeans are left out. And tomorrow the area will be controlled by the Quad+ (US and UK, plus Australia, India and Japan). Washington is preparing a war in one or two decades.

While France and Germany have not been consulted on this strategy, nor even warned of its public announcement (but other countries had been warned, such as Indonesia), the new device should be staged next week in Washington.

While it is logical that London and Washington should rely on Camberra rather than Paris, since Australia is a member of the “Five Eyes” with which France is just associated, the entry into the game of Japan and especially India puts an end to a long period of uncertainty. More troubling is the role assigned to Germany, which could join the “Five Eyes” [2], but not the Quad, i.e. spying on telecommunications, but not military action.

This new situation forces each alliance to reposition itself.

The A-NZ-US, which linked Australia, New Zealand and the United States, has not been in operation since 1985 and has been definitively buried. New Zealand had affirmed its policy of nuclear disarmament and consequently refused entry to its ports to nuclear-armed or nuclear-powered ships. Since the Pentagon refuses to reveal these “details”, no US warship has entered the country. Future Australian submarines will also be banned.

For the moment, the European Union has not reacted. Commission President Ursula von der Leyen, who was giving a state of the Union address [3] on the same day the AUKUS pact was announced, is paralyzed. She was talking about her new strategy in the Indo-Pacific area, while the Brexit Brits were pulling the rug out from under her. Not only is the European Union not a military power, but those of its members who are, will no longer have a say.

NATO is silent. It had ambitions to expand in the Indo-Pacific and understands that it will not be part of the game.

ASEAN has not reacted either, but the Indonesians who host its general secretariat have already expressed their disappointment. The Association of Southeast Asian Nations was conceived during the Cold War like ANZUS or the EU to contain the communist bloc, but it evolved afterwards. Unlike the EU, which has become a supra-national bureaucracy, ASEAN, influenced by the ideology of the Non-Aligned Movement, aspires to form a vast free trade area that includes China. Without delay, many Indonesian intellectuals have denounced the torpedoing of this dream of peace by the AUKUS.

China and Russia, the main enemies designated by the Anglo-Saxons, have not yet reacted. Unlike the West, they never communicate about their intentions, but only about the decisions they have already taken and implemented. Speaking for itself, China has expressed indignation at the Anglo-Saxon mentality of forming the broadest and most powerful alliances possible without regard to the intricacies of each player. This is not a communication trick: the Chinese consider everyone as an equal with their own particularities. For example, when President Xi went to meet European leaders, he spent more time in Monaco than in some EU countries. Putting its money where its mouth is, the day after the AUKS announcement, China formally applied to join the Comprehensive and Progressive Agreement on Trans-Pacific Partnership (CPTPP), the successor organization to President Obama’s proposed Trans-Pacific Partnership. The coincidence of the two events is officially purely fortuitious. In practice, Beijing is offering economic exchanges to all, while Washington is offering war.

Until now, and probably still today, the United States considers that having nuclear-powered ships opens the way quickly to the construction of atomic bombs. This is why it has only offered nuclear propulsion technology to its British ally. Therefore – and whatever the Australians say – building nuclear-powered submarines prepares Australia for entry into the club of atomic powers. The war against China will be a nuclear war. [4]

From this point of view, Japan’s entry into the Quad after the traumas of Hiroshima and Nagasaki is an achievement.

Until now, only the five permanent members of the United Nations Security Council had nuclear-powered submarines. India has become the sixth and Australia is expected to be the seventh.

Since the United States can no longer maintain its rhetoric of dual-use nuclear technology, it can no longer claim that Iranian nuclear research is for military purposes. This should pave the way for open cooperation between Washington and Tehran, which Israel immediately anticipated [5].

THE DOWNGRADING OF THE EUROPEANS

The first loser in this new architecture is France. It has lost its status as a global power, although it still retains its permanent seat on the United Nations Security Council.

The decline of Paris was foreseeable since its armies were placed under U.S. command within NATO’s Integrated Command in 2009. Today, they are no longer able to defend the entire French territory, but send expeditionary forces to defend US interests in Africa. Indeed, the United States has still not managed to deploy AfriCom on the black continent, so it uses French ground troops, which it supports with its air surveillance system.

Paris reacted… by canceling a gala event at its embassy in the United States. The Quai d’Orsay asked the State Department for urgent explanations in the hours preceding the AUKUS announcement. In the end, it considered that Australia had knowingly hidden this project from it, which was instigated by the United States. He therefore recalled his ambassadors in Canberra and Washington. France decided to communicate about the contract of the century cancelled by the Australians. This $90 billion agreement is not much compared to what is at stake and what it has lost.

Paris is all the more stunned because it had thought it had established a privileged relationship with London. Secret negotiations were under way to move the base of the British nuclear-powered submarines (Trident) to France in the event of Scotland’s secession from the United Kingdom [6].

France can take comfort in the fact that its downgrading is taking place in the context of the more general downgrading of all Europeans. The fact that Germany may eventually fare less badly is incidental: Berlin is only allowed to be an economic power and never since the Second World War to be a global political power.

France is not only a European metropolis. It is also a constellation of territories all over the world that gives it the second largest maritime domain in the world (after the United States). In the Indo-Pacific region, it has the departments of Reunion and Mayotte, the communities of New Caledonia and French Polynesia, the territory of Wallis and Futuna, the French Southern and Antarctic Lands (TAAF). All of this is inhabited by 1.6 million French nationals.

France is therefore a power in the Indo-Pacific. As such, it has offered to help its European Union partners, which it has taken care to place outside the US-China strategic rivalry. It is a member of the Indian Ocean Commission, participates in the ASEAN Defense Ministers’ summits, in its police and intelligence coordination (ASEANAPOL) and should soon join the Regional Cooperation Against Piracy (RECAAP). Ultimately, France, which is to assume the presidency of the European Council during the first half of 2022, planned to make use of its roots in the Indo-Pacific as one of the European Union’s challenges.

TAIWAN, THE BONE OF CONTENTION

Everyone knows that the Pacific islets claimed by China will not be the object of a future war. This is because none of the other countries claiming them want this and history has proven Beijing’s claims right. It is quite different for Taiwan.

We remember that Mao Tse-tung achieved the unity of China by defeating one after the other all the warlords who had divided its territory. He also recaptured Tibet, which had seceded and allied itself with Chiang Kai-shek and the West. But he failed with Formosa where Chiang settled. His regime evolved. It went from a ruthless dictatorship to a certain democracy, Taiwan.

The AUKUS Pact seems to be designed to come to Taiwan’s aid if China tried to take it back by force. General Sir James Hockenhull, commander of Her Majesty’s Military Intelligence, confirmed that British armies were recruiting Asian agents. The former Prime Minister, Theresa May, has thrown in the towel by asking the Commons whether or not the pact would go to war if China tried to reclaim Taiwan.

The G7 summit in Carbis Bay in June had seen Japan impose its unwavering support on Taiwan. But it was during this summit that Joe Biden, Scott Morrison and Boris Johnson sealed the principle of their pact behind the scenes.

To answer Theresa May’s question, we would need to have the text of this pact in its entirety, including its secret annexes, if there are any. At the moment, however, we do not even have a piece of paper. We have to make do with press releases.

The most we know is that the AUKUS is about a very broad cooperation in the field of armaments. The aim is not only to provide Australia with nuclear-powered submarines, but also to equip it with Tomahawks and Hornet missiles, and to involve it in research into hypersonic missiles (capable of competing with Russian nuclear missiles).