HOME / WORLD / Space Farce! The US Space Force sets out its mission to achieve ‘digital dominance’ in the universe – & becomes a cartoon parody 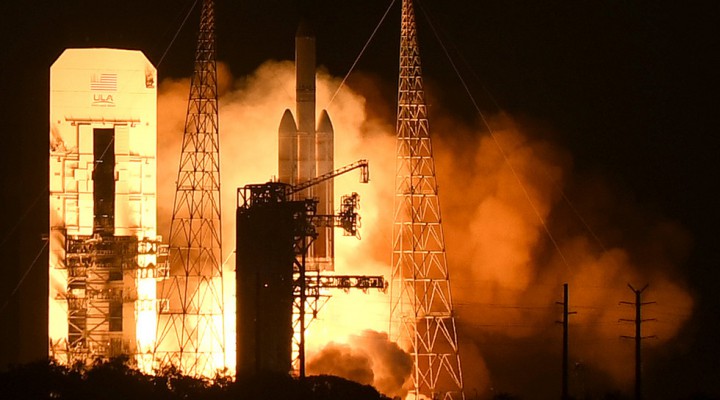 n Kinka Usher’s 1999 superhero comedy film, Mystery Men, there is one character, a Mexican wrestler-turned-superhero who goes by the name ‘Sphinx.’ Throughout the film, the ‘Sphinx’ offers up platitudes that would rival Sun Tzu, Confucius, or Yoda. “He who questions training,” he says on one occasion, straight-faced, “only trains himself at asking questions.” Another time, he declares deadpan, “to learn my teachings, I must first teach you how to learn.”

To which ‘Bowler,’ another superhero in the movie played by Janeane Garofalo, observed: “Whoa!”

That was my response in reading the latest tract published by the newly formed US Space Force (USSF), entitled “US Space Force Vision for a Digital Service.” Although the document is signed by the Commander of US Space Force, General John W. Raymond, it could have been written by the ‘Sphinx,’ since its contents are little more than a series of disconnected statements of so-called wisdom and insight that leave the reader confused as to what the actual intent of the document is and, more importantly, struggling to ascertain a military mission for the US Space Force.

Its apparent mission is to “organize, train, and equip space forces in order to protect US and allied interests in space and to provide space capabilities to the joint force.” The responsibilities of the force include “developing Guardians [the ridiculous name given to an individual member of the force], acquire military space systems, mature the military doctrine for space power, and organize space forces to present to our Combatant Commands.”

Truth be told, this is simply a re-working of that of the former US Air Force Space Command (AFSPC), which was responsible for operating the US military space launch capability as well as overseeing satellite monitoring and early-warning radar capabilities. USSF essentially took over that mission, and the people and facilities of AFSPC when it came into being. The idea behind the creation of the Space Force came from former President Donald Trump, who created the new military service over the opposition of the US Air Force.

Space Force was envisioned by its supporters to be a forward-looking agency which would seek innovative solutions to emerging problems so that the US would remain ahead of any potential adversary. This notion was taken to extremes by some supporters, such as Texas Senator Ted Cruz, who opined at a Senate hearing on the subject that “[p]irates threaten the open seas, and the same is possible in space. In this same way, I believe we, too, must now recognize the necessity of a space force to defend the nation and to protect space commerce and civil space exploration.”

Cruz later clarified that he was talking about the threats from China and Russia, but the fact of the matter is that, from its inception, the Space Force has had a cartoonish aspect about it. While its motto, “Semper Supra” (Always Above), is memorable, so, too, is the Space Force logo, which to many space aficionados looks as if it were lifted from the popular television show and movie franchise, Star Trek. When Space Force is talked about, one cannot help but hear the voice of William Shatner – Captain Kirk – speaking the immortal phrase, “Space–the final frontier…” or Buzz Lightyear (from Pixar’s Toy Story) shouting “To infinity and Beyond!”

Space Force is, in many ways, a joke – the pet project of a narcissistic president whose bevy of “yes” men (and women) at the Pentagon and Congress breathed life into a fake entity, much like Doctor Frankenstein, at a cost of billions of dollars of taxpayers’ money.

It is not that there is not a serious mission to be implemented by USSF – launching satellites and managing the programs those satellites support is critical to the success of the US military and the country as a whole. But this mission does not justify the creation of an entirely new military service on par with the Army, Navy, Air Force and Marines. All the effort by its supporters to bring gravitas and credulity to it simply ends up looking pathetic.

Matthew Gault, a reporter for Vice, called the Space Force digital vision document “a 17-page collection of buzzwords and phrases that feel pulled from a dotcom startup pitch deck from 1995.” He was being too kind by far.

“The USSF,” the vision document declares, “will become the world’s first fully Digital Service. We will be an interconnected, innovative, digitally dominant force.” To accomplish this, the document states that USSF will “change the paradigm” by acting “far more swiftly and decisively across all aspects of leadership, acquisition, engineering, intelligence, and operations in order to take up permanent residence inside the adversary’s observe, orient, decide, act (OODA) loop.”

By referencing the OODA Loop, the USSF gives away its Air Force roots. This concept was the intellectual creation of Colonel John Boyd, and initially intended to train fighter pilots how to shoot down their opponents in aerial combat, and later adapted by the Marine Corps as one of the core philosophical tenets of its “maneuver warfare” doctrine.

Gaining air superiority through force of arms or using maneuver warfare to defeat an enemy on the ground, are legitimate applications of the OODA Loop, as has been proven over time. However, the mating of the OODA Loop with the launching and maintenance of satellites is, to put it gently, a stretch.

So, too, is the concept of space as a battlefield, where, as the USSF digital document claims, “potential adversaries are working diligently to negate US advantages in the space domain and are rapidly closing the gap. They are pressing to field space, counterspace, cyberspace, and electromagnetic spectrum (EMS) capabilities more quickly than we are and, in some cases, are on pace to surpass us.”

The solution to this highly fanciful threat? To field a “Digital Space Force” that operates as “an interconnected, innovative, digitally dominant force.”

An “interconnected” USSF, the document explains, “encompasses both the people and the infrastructure needed to enable and foster unrestrained exchange of information and ideas.” To achieve this, the USSF must “incubate a culture of forthright mutual trust both horizontally and vertically across the force.” The reader is reminded that “in this fast-paced, high-threat environment, we must continually keep in mind we are all on the same team.”

‘I cannae change the laws of physics!’

The digital vision document is full of such gibberish. Words, however, do not automatically translate into capability. One of the USSF missions is to track space objects. To better accomplish this, USSF has partnered with the Silicon Valley data management company, Palantir, to build a common operating picture of space to enable USSF “to better understand what is orbiting the earth, be it satellites, space debris or incoming hostile projectiles.”

And yet, in 2016, when Palantir hired an outside hacking firm, Veris Group, to test its cyber security, the hackers were able to take full control of Palantir’s computer domain, an act which, if done by malign outside actors, could have compromised the security of all data managed by Palantir.

In its rush to be innovative, USSF may end up giving any potential adversary the ability to hit “control, alt, delete” on its operations. These risks will, its commanders believe, be more than mitigated by the fact that USSF has hired the cyber security firm Xage Security to safeguard its digital domain.

Xage specializes in securing data for clients using what is known as a “zero-trust blockchain” approach. While, on the surface, the “zero trust” approach provides for an effective defense against the kind of cyber attacks that plagued SolarWinds and, more recently, Colonial Pipeline, the enemy of “zero trust” is digital innovation – the very kind of digital innovation that drives the new USSF vision.

One of the core tenets of that vision is the ability of its Guardians to deliver “truly game-changing innovations” which require the Guardians “to be empowered to act on their ideas.” To accomplish this, the document states, “USSF members must be granted the psychological safety and professional incentives to be assertive and take risks when appropriate.” To support this “paradigm shift” in thinking, the USSF will “relentlessly drive decision-making down to the lowest practicable level. By fostering this culture, we will break free of legacy, passive mentalities and establish an environment of bottom-up, organic innovation to catalyze our digital transformation.”

In an organization where every Private is in effect his or her own General, chaos will inevitably reign. And with that chaos comes errors, which potential cyber threats will exploit. This is the primary problem with a military service that cannot ably and succinctly define its mission. Every attempt to do so ends up sounding like it was written by the “Sphinx.” This is the primary issue with this “digital service” concept – it fails to define anything, especially a mission capable of advancing the combat capabilities of the United States.

The USSF certainly believes it will be a dominant force – it states this throughout its document. By “[c]ombining this broad-based digital collaboration with the organic capabilities of our tight-knit and technologically proficient force,” the document states, “we will become digitally dominant. Through this digital dominance, we will achieve the speed and agility needed to drive advantage over competitors and adversaries in order to maintain space superiority.”

Or, as the ‘Sphinx’ might put it, “The wise man knows he is weakest where he thinks himself strong.”

0 thoughts on “Space Farce! The US Space Force sets out its mission to achieve ‘digital dominance’ in the universe – & becomes a cartoon parody”