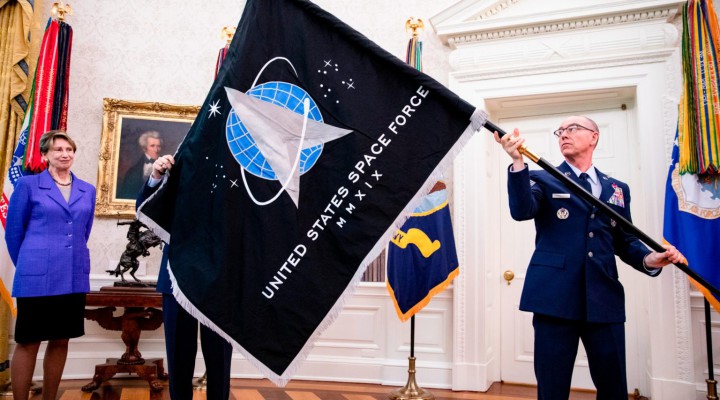 On 19 June, the unclassified section of the Pentagon’s new space defence strategy was released, and it clearly states that the US views the environment as a field of operations.

The publicly available document is short in length, but it clearly shows the position and intentions of the US military with regards to space – to achieve and retain US military superiority.

In the spirit of previous strategies and doctrines, Russia, China, Iran and North Korea, none of which will give US citizens a peaceful night’s sleep, are once again used as justification.

The moulding of public opinion on the subject has been going on for years. Back in 2017, the US Senate Select Committee on Intelligence considered a special report that stated Russia and China would use the “full range” of possibilities in space warfare in order “to reduce US military effectiveness”.

Similar phobias were highlighted in a Forbes article published in July 2019, which talked about the possibility of a cyberattack on US military satellites by Russia and China. It also noted that “electronic warfare on the part of Russia in Europe and the Middle East and cyber offenses on the part of China have become the reality of modern-day hybrid warfare.” The article also mentions the work of the Consultative Committee for Space Data Systems, whose report was published in 2015.

The new strategy says that space is not a “sanctuary from attack”, and “space systems are potential targets at all levels of conflict”. It also states that “China and Russia present the greatest strategic threat due to their development, testing, and deployment of counterspace capabilities and their associated military doctrine for employment in conflict extending to space. China and Russia each have weaponized space as a means to reduce U.S. and allied military effectiveness and challenge our freedom of operation in space.”

The strategy includes a phased approach to defence operations in four areas: 1) build a comprehensive military advantage in space; 2) integrate space into national, joint and combined operations; 3) shape the strategic environment; and 4) cooperate with allies, partners, industry and other US government departments and agencies.

It states that the current US space defence system was not built for the current environment. Today, US interests in space have reached the point where they not only improve capabilities, but are also linked to lifestyle and methods of warfare. As a consequence, US national security and prosperity require unhindered access to space.

However, apart from the four countries already mentioned, there is absolutely no indication of any other threats that could limit America’s access to space. All the more so because there has been joint work going on for years on the International Space Station.

The idea of creating a space force was outlined by Donald Trump in March 2018 as he signed the new National Security Strategy. Back then, he stated that “space is a warfighting domain, just like the land, air and sea”. It was emphasised that “[i]n military operations, space is not just a place from which we support combat operations in other domains, but a warfighting domain in and of itself.”

The cost of setting up the space force and supporting it for the next five years stands at $13 billion. Until 2020, the US Air Force took care of US military activities in space, but now the functions are completely separate. According to the US Air Force, the US Space Force consists of 13,000 personnel.

On 21 January 2020, the US Space Development Agency announced seven areas of work that it refers to as constellations.

– Transport: reliable communications between US forces around the world;

– Tracking: to detect and track enemy missiles, including hypersonic ones;

– Custody: to keep an eye on enemy ground launchers and other mobile targets;

– Navigation: to augment or replace GPS;

– Deterrence: to deter hostile action in “deep space”, i.e. from Geosynchronous Earth Orbit up to lunar distances; and

All of these should be actively working by the end of 2020.

At the same time, it was announced that the Pentagon is planning to create a large number of new satellites. They will apparently be cheaper (approximately $10 million each) and lighter (a few hundred kilogrammes). One satellite will be built every week and, at this rate, the new batch will be launched into orbit by 2022, and they will be updated every two years. As always, America’s defence industry has willingly responded to Raytheon Vice President of Space Gil Klinger, who believes that “the space community must recognize the need to fully incorporate all the U.S. space forces into warfare”. He says that it is not just a case of keeping the satellites operating. Supporting operations must also include harmonising, integrating and becoming an essential part of the operational capabilities that US forces use in other domains. Klinger proposes the development of combined and collaborative space forces.

As early as January 2020, the new US Space Force had started building an arsenal of 48 ground-based weapons systems designed to temporarily jam Russian or Chinese communication satellites in the first few hours of a possible future conflict. They will be built and put into operation over the next seven years.

The first system built by L3Harris Technologies Inc. was declared operational in March 2020 after several years of development, and the US Space Force signed a contract for 16 of these units. The service is also developing a new system known as Meadowland that is lighter weight, capable of adding updated software, and able to jam more frequencies.

It should be noted that Russia has repeatedly offered to sign an agreement with the US banning the use of weapons in space, but this is something that the US legislators, intelligence officers and government officials writing about a possible conflict in space prefer to keep quiet about.

US Making Outer Space the Next Battle Zone – Karl Grossman

0 thoughts on “US Begins Active Militarisation Of Space”