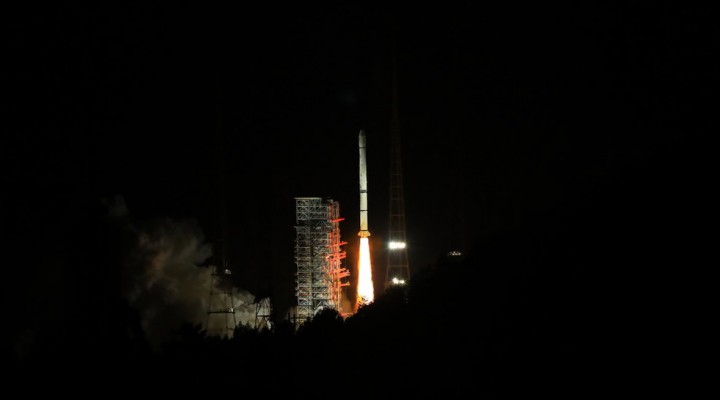 Washington has made startling accusations that Russia & China “have already turned space into a war-fighting domain,” but what’s really going on is the US is attempting to distract from its own controversial space militarization.

There is also a sequence of events reflecting Washington’s increasingly hysterical hostility towards Russia and China in which all events are perceived through an obsessive American lens of “hybrid warfare.”

An additional factor is the intensified US demand to include China in arms control talks with Russia, which resumed this week.

The claim made against Russia and China by Christophe Ford, a State Department arms control envoy, comes against the backdrop of President Trump announcing the establishment of a new Space Force Command earlier this year. That move by the Trump administration flies in the face of decades-long advocacy at the United Nations by Russia and China to keep weapons out of space.

The 1967 UN Outer Space Treaty forbids weaponization in the outer atmosphere. Thus, America’s renewed efforts through its Space Force Command are arguably illegal. Allegations from Washington that Moscow and Beijing have turned space into a war-fighting domain appear to turn reality on its head.

Karl Grossman, a professor at the State University of New York who has written extensively on the subject, says that Russia and China have consistently advocated for the expansion of the existing UN treaty to ban not only the placement of weapons of mass destruction but also for a prohibition on any weaponization in outer space.

“The United States has repeatedly voted against this effort, essentially casting a veto at the UN,” Grossman said.

It would seem therefore that America’s claims are motivated by a need to obscure its own controversial militarization of the “final frontier.”

On July 15, the US and Britain accused Russia of testing an anti-satellite weapon in space. Moscow denied this, saying it was carrying out an in-orbit satellite “inspection” by another one of its own satellites. The US Space Force Command acknowledges it was a “non-destructive event” but nevertheless alleged it was an attempt by Russia to deploy a “bullet” in space.

“Inspection of satellites” could of course be a euphemism for gaining the capacity to spy on other nations’ space vehicles. The US is reportedly involved in developing the same kind of surveillance activity against foreign satellites. But for the Americans to accuse Russia of testing a space-based “anti-satellite weapon” seems to be a provocative stretch.

Notably, the report of the alleged Russian weapon test was followed immediately by sonorous statements hailing the establishment last year of the US Space Force “to deter aggression and defend the nation.”

Grossman says: “The new US Space Force is, I’d say desperately, trying to justify itself and thus its announcement that Russia conducted an anti-satellite weapons test needs to be considered in this context.”

But there is more to the sequence of events. Last week, on July 23, China launched its first rover to explore Mars. If the mission succeeds in landing on the Red Planet in seven months, it will be seen as a breakthrough achievement by China, putting the country on par with the US in space exploration. The Chinese launch came a week before NASA blasted off its new rover to Mars which is due to reach the planet in February around the same time as China’s.

It seems significant that Christophe Ford, the US arms control envoy, first made his announcement accusing Russia and China of weaponizing space the day after China’s historic Mars mission launch. Given the closely overlapping engineering shared by space rocketry and ballistic missiles, it could, therefore, be loosely argued that a Mars mission by China has military dimensions. (As would all American missions, if using the same tenuous reasoning.)

However, in the present context of rampant accusations against Russia and China of waging “hybrid war,” including everything from “meddling in elections to subvert US democracy” to “unleashing a virus pandemic to destroy American capitalism,” it is not hard to see how in Washington’s mindset events in space could be construed as yet more hybrid warfare. American paranoia is simply going extraterrestrial.

Another important factor in the sequence is the resumption of arms control talks this week in Vienna between the US and Russia. These negotiations are aimed at extending the New START accord limiting strategic weapons. Washington is pushing the Russian side to lever China into joining a new trilateral arms control agreement. Secretary of State Mike Pompeo admitted in a recent keynote speech that Washington was seeking Russia’s help in curbing China’s nuclear arsenal. Moscow has indicated that such a trilateral accord with China, considering its relatively smaller arsenal, is not relevant at this stage in bilateral negotiations between the US and Russia over New START.

The US warned it would bring up the issue of Russia’s alleged anti-satellite weapon at the arms control talks this week in Vienna.

It seems the US is using claims about space weaponization not only to distract from its own illicit program, but also to undermine Russia in arms talks as a way to pressure Moscow into accommodating Washington’s overbearing demands regarding China.

That does not augur well for a successful arms control agreement or for global security. A foreboding case, so to speak, of ‘watch this space’.