HOME / WORLD / America declaring China’s territorial claims illegal is all bark & no bite. The US is militarily & economically impotent 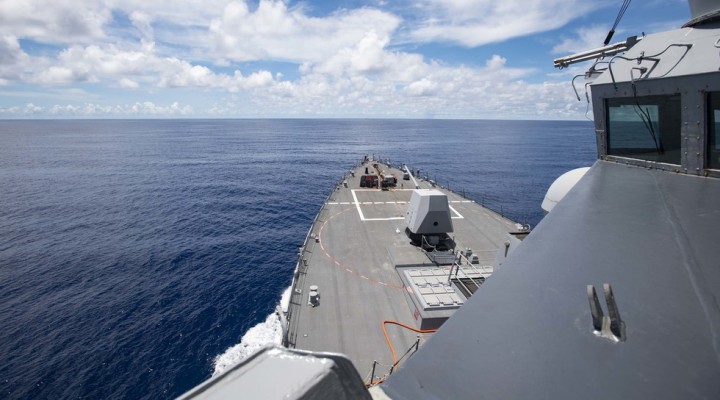 Mike Pompeo’s statement that Beijing’s claims in the South China Sea are unlawful was seen by some as a dramatic step toward war. But it’s little more than bluster as the US knows it is not yet capable of taking military action.

Secretary of State Mike Pompeo issued a statement this week which rejected – as official US policy – China’s territorial claims in the South China Sea, saying that there was no legal basis for China’s claims and accusing China of using intimidatory tactics against littoral states with competing claims.

“We are making clear,” the statement read, “Beijing’s claims to offshore resources across most of the South China Sea are completely unlawful, as is its campaign of bullying to control them. The world will not allow Beijing to treat the South China Sea as its maritime empire.”

Under its self-proclaimed “nine-dash line” policy, China claims about nine-tenths of the 3.5-million square kilometer South China Sea. In addition to asserting territorial claims over existing shoals and islands, China has constructed a series of fortified man-made islands which it has used to assert its presence in the region. Five other nations – the Philippines, Vietnam, Brunei, Malaysia and Taiwan – dispute China’s claims, and have filed various legal challenges over the years, some of which have been recognized as valid under UN arbitration.

Until Pompeo’s statement was issued, the official US policy was one of neutrality regarding China’s territorial claims. Now the US has lined up against China in a dramatic manner. The timing of Pompeo’s statement did not take place in a vacuum.

Less than two weeks ago, the United States Navy undertook a fresh round of “freedom of navigation” exercises aimed at putting China on notice that its territorial aspirations in the South China Sea would not go unchallenged. The deployment of two carrier battle groups was an unprecedented display of military muscle flexing, remarkable not simply for the size and scope of the drill, but rather the context in which it was conducted.

Yesterday, the UK, America’s closest ally, said it was intending to station one of its new aircraft carriers in the region, apparently as a measure to counter an “increasingly assertive China.”

China has, in recent months, publicly displayed its own military arsenal, in particular two classes of missiles, known as the DF-21 and DF-26, which have been given the moniker “carrier killers” for obvious reasons.

The Global Times, an English-language paper published under the auspices of the Chinese Communist Party, made reference to these missiles in a tweet published in response to the deployment of the US carriers, noting that “China has a wide selection of anti-aircraft carrier weapons like DF-21D and DF-26 “aircraft carrier killer” #missiles. South China Sea is fully within grasp of the #PLA; any US #aircraftcarrier movement in the region is at the pleasure of PLA.”

The US Navy’s Chief of Information, Rear Admiral Charlie Brown, sent out a tweet in response, declaring “And yet, there they are. Two @USNavy aircraft carriers operating in the international waters of the South China Sea. #USSNimitz & #USSRonaldReagan are not intimidated #AtOurDiscretion.”

Admiral Brown’s bluster disguises the reality that missiles such as the DF-21 and DF-26, which are referred to as “anti-access/area denial” weapons (AA/AD), represent a new face of maritime warfare that makes the US carrier battle group obsolete.

This is reflected in new guidance issued by the Commandant of the Marine Corps for the marines to restructure its amphibious strike capability to reflect this new reality. “Visions of a massed naval armada nine nautical miles off-shore in the South China Sea preparing to launch the landing force…are impractical and unreasonable,”General David Berger noted. “We must accept the realities created by the proliferation of precision long-range fires, mines, and other smart-weapons, and seek innovative ways to overcome those threat capabilities.”

The importance of the Commandant’s guidance is that it is based in reality, not theory – the Marine Corps is currently undergoing a radical restructuring of its combat organization and capability, shedding so-called “legacy” capabilities such as heavy armor and military police in favor of a new “expeditionary” structure which will operate from advance bases in the Pacific and make use of its own long-range strike capabilities to disrupt a potential adversary – in this case, China.

While some feverish commentators took Pompeo’s words as setting the legal foundation for the use of military force against Beijing, the truth is that neither the Marine Corps nor the US Navy are able to successfully execute a China-beating military campaign in the South China Sea today – and any such capability is years away. This is the fallacy of Secretary Pompeo’s statement – words that cannot be backed up with might are, to be blunt, meaningless.

Pompeo’s statement did not specify what consequences the US is prepared to impose in the event China continues its aggressive assertion of its “nine-dash line” claims, for the simple fact that there are no meaningful consequences that can be imposed.

Pompeo’s bluster seemed more intent in driving a wedge between China and its Association of Southeast Asian Nations (ASEAN) trading partners, many of whom have territorial disputes with China in the South China Sea, than starting a war.

China has been for years now seeking to strengthen its economic and security ties with the ASEAN bloc, much to the consternation of the US. Indeed, one of the major obstacles faced by the US in confronting China in the South China Sea is the reticence among the very nations Pompeo sought to court in his statement to alienate relations with China, whose status as the region’s most economically powerful trading partner most ASEAN nations cannot ignore.

Here, President Trump’s precipitous decision to withdraw from the Trans-Pacific Partnership (TPP) in 2018 has come back to haunt US policy makers – void of any viable US-led economic alternative, the ASEAN nations have no choice but to gravitate toward China.

By putting down a marker that it views the totality of China’s South China Sea claims as legally impermissible, the Trump administration is seeking to influence the diplomatic arena where the various disputes China has with the South China littoral states will be handled for the foreseeable future.

Other than words, however, the US has limited leverage that it can apply – freedom of navigation exercises are an irritant to China, but have done nothing to halt its expansion in the region, and in the aftermath of the collapse of the TPP, the US has failed to put forward any coherent regional economic development strategy to counter that of China.

The critical question is to what extent the South China Sea littoral nations are willing to rally around the new US declaratory policy regarding China’s ambitions in the South China Sea. Lacking either the military muscle to compel Chinese change or the economic wherewithal to offer a meaningful alternative to China’s economic influence, Pompeo’s statement is little more than empty words masking growing US impotence.

The fact that the sole meaningful response to China’s stance in the South China Sea being pursued by the US is a radical restructuring of the Marine Corps solely designed to engage China militarily in the region should be worrisome to all; by failing to back up strong rhetoric with meaningful policy options, the US is in danger of backing itself into a corner for which the only solution will be the military tool offered by the marines. The entire world should hope and pray that it does not come to that.

0 thoughts on “America declaring China’s territorial claims illegal is all bark & no bite. The US is militarily & economically impotent”