HOME / WORLD / The Volleys Of An Information War Against China 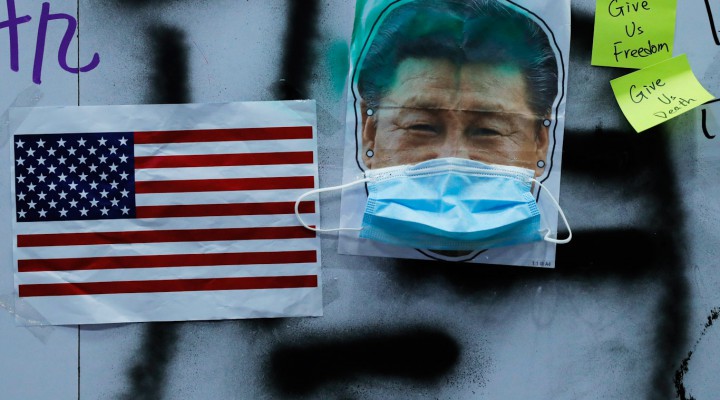 A strategic information campaign against a particular state usually involves a number of elements and layers. While officials and diplomats gradually increase the aggressiveness of their rhetoric, “independent” media outlets publish a range of articles from life stories to special investigations. They may differ in tone and subject matter, but they all have the same goal. Campaigns like these are of particular importance to the US, where there is a tradition of enlisting the support of public opinion. Therefore, to ensure the success of foreign policy actions, the public must be prepared.

Stories about bad guys tend to be the most effective. In general, the idea of the villain is used in the methodology of the political frame – the technique is always used in US elections, but it is also widely used in foreign policy.

A test tube filled with washing powder can be waved around and Saddam Hussein can be accused of having chemical weapons. That was a story that did its job perfectly.

Accusing Iran of preparing to develop nuclear weapons proved to be more complicated. Now, the volleys of an information war against China can be heard. While America’s top officials and bureaucrats do their thing, the country’s corporate media outlets are developing other avenues. The Drug Enforcement Administration is seizing bulk cash amid the coronavirus pandemic, which has hobbled money laundering schemes and created a backlog of drug proceeds in Los Angeles.

At the end of April, the Los Angeles Times published an article on the impact of the coronavirus on money laundering, especially in California, which is a hub of international drug trafficking. Quoting a special agent in charge of the Drug Enforcement Administration’s Los Angeles field division, the newspaper talks about a new sophisticated scheme involving Chinese citizens. Apparently, due to the restrictions on the amount of money that Chinese citizens can move overseas, drug traffickers and money brokers have set up the following system: a Chinese citizen wishing to convert yuan to dollars and stash it in the United States makes contact with a broker. The broker will tell this person to pay a factory that produces chemicals used in the manufacture of methamphetamine or fentanyl.

The factory then sends the precursors to Mexico, where they are converted into drugs, smuggled into the United States and sold for dollars. The broker tells the group in charge of the drug trafficking to deliver cash to a relative or an associate of the Chinese citizen whose money triggered the whole process. The money thus ends up in the United States in dollars, but it hasn’t entered the global financial system. “The more money that wants to leave China, the more chemicals go to Mexico and the more synthetic drugs end up in L.A.,” said the special agent. It is a bit like the hawala system that the US cracked down on in the early 2000s in connection with the possible financing of terrorism. The new scheme is more complicated, however, because the elements of the crime are much broader.

As the Los Angeles Times writes, most of the precursors for drugs are produced in the Chinese city of Wuhan, the same city where the global coronavirus pandemic began. Since some of these factories are not operating at present, this has had a knock-on effect on the illegal flow of money within the US.

US law enforcement officers are attributing this to the fact that “[w]hen chemicals aren’t flowing from China, there’s no churn in the money laundering system”. The article does not mention any specific methods for controlling illicit flows.

Another indirect factor is the soaring price of methamphetamine in Los Angeles. At the end of last year, the price was around $900 a pound, but it is now more than double that. Weapons, ammunition, alongside bags of crystal methamphetamine and meth-laced yaba pills seized by Myanmar police and military are seen in this undated photo near Loikan village in Shan State, between February and April 2020 in what the United Nations Office on Drugs and Crime described as Asia’s biggest-ever drug bust.

The next article was published by the Reuters news agency on 18 May. It describes a successful operation by the Myanmar police to seize 3,700 litres of liquid fentanyl in Shan State on the Chinese border. After a lot of big talk about what the UN is doing to combat drug trafficking and the high numbers of overdose deaths in the US and Canada, the agency provides some rather sensitive details. One of the meth producers in the region is the Sam Gor syndicate. The head of law enforcement for Myanmar’s counter-narcotics agency, Colonel Zaw Lin, said that the methylfentanyl had come from a neighbouring country, but he does not specify which one. Myanmar police documents seen by Reuters say that the majority of the seized drugs, precursors and equipment had come from China.

The article then goes on to talk about Mexico and China’s role in supplying drugs to the US.

As a junior partner of the US propaganda machine, British newspaper The Telegraph highlighted the Asian roots of America’s narcotics problem by providing a detailed description of the police operation in Myanmar, adding that it was the first time such a large consignment had been seized. The article also stressed that the drugs were destined for North America rather than Asia or Europe. The newspaper had already paid attention to the problem in a previous article, although, geographically, the only country mentioned is Mexico, from where synthetic opioids began entering the US in 2013.

It should be added that the subject of synthetic opioids is also being covered by the RAND corporation, whose employees are preparing similar reports. In one of these, published towards the end of 2019, China features as a manufacturer of drug precursors and a primary source of the drugs circulating in Europe and the US.

This story does not end with the accusation that Chinese citizens are involved in the manufacture of narcotics and their distribution in the US and Canada, however.

The fact is that the border between Shan State and China is controlled by rebel groups – the Myanmar National Democratic Alliance Army (MNDAA), which includes ethnic Chinese fighters, and the 20,000-strong United Wa State Army (UWSA). There is also the opinion that the UWSA receives direct support from the People’s Republic of China. In turn, the UWSA provides arms, ammunition and fighters to another rebel group – the ethnic Palaung Ta’ang National Liberation Army, which controls the area west of the main Mandalay–Lashio highway extending north towards the border with China.

This pattern of information allows a narrative to be created that China not only manufactures narcotics, but essentially created a combat-ready international criminal gang able to compete with the Mexican and Colombian drug cartels. And that is a matter of international security. Although the US has no evidence of China’s involvement in the process besides references in the media, RAND reports and their own intelligence agencies, an information campaign is a clear indication that the corresponding fabrication of facts has begun.

0 thoughts on “The Volleys Of An Information War Against China”