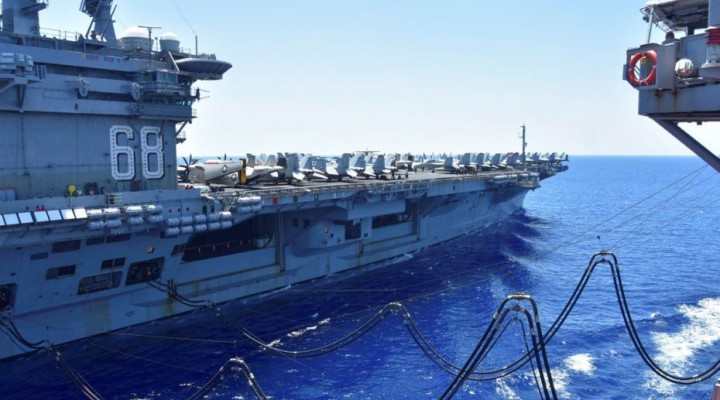 Britannia no longer can afford the pretense of ruling the seas, never mind serving as cannon fodder for Uncle Sam in a reckless imperialist showdown.

America’s trusty British lieutenant has weighed in to stoke tensions in the South China Sea with reports that Britain is to deploy its two new aircraft carriers to the Pacific region. The carrier strike groups which include frigates, destroyers and nuclear-powered submarines, are to join with U.S. and Japanese warships to conduct naval drills.

Beijing has already warned London that any deployment of forces in the contested sea will be viewed as a “hostile act”. Britain appears to be pushing ahead regardless, according to a report this week in the London Times, which cites plans by military chiefs to send the aircraft carriers to the region starting early next year.

HMS Queen Elizabeth and HMS Prince of Wales are the largest aircraft carriers ever built by Britain. Both have been designed to integrate with U.S. forces, specifically to carry F-35 fighter jets and Apache helicopters.

Given the recent buildup of American warships and warplanes in the Pacific conducting provocative “freedom of navigation operations” in the South China Sea, Beijing can only but view the reported British moves as further deliberate ratcheting up of war tensions.

Earlier this month, two U.S. aircraft carrier strike groups conducted joint maneuvers in the South China Sea, reportedly the first time such drills have been carried out since 2014 and only the second time since 2001.

The timing of Washington and London’s convergence could not be more incendiary. Washington and London have been blaming China over the global coronavirus pandemic on top of a long-running trade dispute with the Trump administration. The Anglo-American duo have also been winding up tensions with Beijing over Taiwan and Hong Kong undermining China’s sovereignty claims. The Americans have also piled pressure on Britain to scrap plans for Chinese telecom giant Huawei to take part in mobile phone modernization.

This week the U.S. State Department raised the stakes even higher over South China Sea territorial disputes by declaring that Beijing’s claims to waters and islands to be “completely illegal”. Secretary of State Mike Pompeo stated the U.S. would not “allow China to treat the South China Sea as its maritime empire”.

This designation by the State Department of alleged Chinese “illegality” marks a serious escalation. Up to now Washington has refrained from using that incriminating term, preferring to characterize China’s territorial claims as “destabilizing”. Pundits in Washington are quoted as saying approvingly that the new formulation gives the U.S. a “legal” basis upon which to confront Beijing over South China Sea disputes.

John Bolton, the hawkish former national security advisor to Trump, has commented: “It’s time to move beyond freedom of navigation exercises to oppose China’s coercive behavior in the region.”

That implies Washington will seek to polarize tensions even further between China and other Asian neighbors which the U.S. claims to be allied with. Ultimately, the U.S. is finessing a casus belli.

China condemned the State Department’s latest intervention as “distorting” relations between Beijing and neighboring countries belonging to the Association of South East Asian Nations (ASEAN). China said it is Washington that is fueling tensions in the region.

A Global Times noted noted: “Peace and stability in the South China Sea concerns ASEAN’s fundamental interests. But the U.S., driven by its own interests, is shaping this regional situation in the opposite way.”

Reports that London is planning to send its new flagship aircraft carriers to the region to join with American, Japanese and possibly Australian naval forces can only be perceived as an attempt by a Washington-led “coalition of the willing” to intimidate Beijing.

In a 21st century version of gunboat diplomacy, Washington is gambling that Beijing will buckle under pressure to cede to demands over trade and other strategic interests. America’s waning capitalist power can no longer compete economically, therefore it is reverting to brute military force along with a coterie of press-ganged vassals, including Britain.

There is, however, a discernible lack of credibility in this “coalition of shilling” for Uncle Sam.

News that Britain is sending HMS Queen Elizabeth, a $4-billion aircraft carrier, followed by HMS Prince of Wales at a later date, to “rule the waves” more than 10,000 kilometers from London doesn’t just sound corny, it sounds obscene given the public health disaster facing Britain over its gross mishandling of the coronavirus disease. Chief medical experts are warning that Britain may see 120,000 more deaths later this year – on top of the 43,000 already – due to clapped-out health services.

British elites have really lost the plot. Britannia no longer can afford the pretense of ruling the seas, never mind serving as cannon fodder for Uncle Sam in a reckless imperialist showdown.

China is reckoned to have a formidable arsenal of anti-ship missiles known as “carrier killers”. So, let doughty Britain row in behind Uncle Sam’s pirates, and the British will soon find they may as well be sailing in giant sieves. Billions of dollars sent to a watery grave in an instant while millions of Britons fight for their lives in underfunded hospital corridors.

0 thoughts on “Deluded Britain Rows in Behind U.S. Gunboat Diplomacy on China”