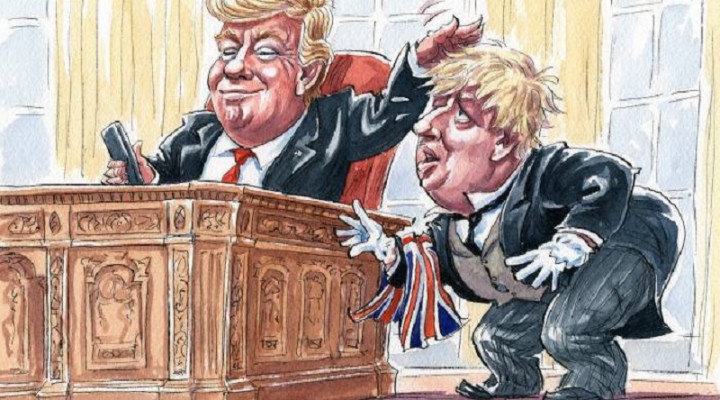 The UK’s imposition of so-called “humanitarian sanctions” against 49 individuals from Myanmar, North Korea, Russia, and Saudi Arabia that it claims are supposedly involved in “human rights abuses” is nothing more than London following its “big brother’s” lead from “across the pond” in the post-Brexit era, proving that the former superpower is well past its geopolitical prime and is increasingly turning into an American proxy instead of taking the historic opportunity to pursue a more independent foreign policy.

The UK is well past its geopolitical prime as the former superpower that it once was two centuries ago and is increasingly turning into an American proxy in the post-Brexit era following its imposition of so-called “humanitarian sanctions” against 49 individuals from Myanmar, North Korea, Russia, and Saudi Arabia that it claims are supposedly involved in “human rights abuses”. Britain is following the lead of its “big brother” from “across the pond” as it struggles to carve out a place for itself in the world after leaving the EU four years ago.

Instead of pursuing a comparatively more independent foreign policy, its leadership has simply opted for switching one patron with another. Brussels demanded full compliance with the bloc’s domestic policies while Washington demands the same when it comes to its foreign policy. This development shouldn’t have been surprising since the author observed last month how “MI6 Might Become The CIA’s Proxy For Stopping Europe From Moving Towards Russia“, with this latest move just being the next more public step in that direction.

It was predictable enough that the UK would target Russia considering the fake news scandal a few years ago surrounding former spy Sergei Skripal’s failed assassination that London decided to blame on Moscow, and so-called “rogue states” like Myanmar and North Korea are natural targets whenever a country wants to virtue signal its commitment to so-called “human rights”, but Saudi Arabia’s inclusion wasn’t foreseen by many considering that the UK sells lots of armaments to the Wahhabi Kingdom and supports its War on Yemen.

The Khashoggi Incident seems to have effected change in how the UK perceives its traditional ally, at least superficially, and it speaks to what might be a forthcoming pressure campaign against the Kingdom on a similar such “soft power” basis as Western countries seek to punish it for strengthening ties with their Russian and Chinese rivals like it’s done in recent years. Trump doesn’t seem too keen on this considering that he needs Saudi Arabia’s support to “contain” Iran, but a Biden Presidency might take this opportunity and run with it.

Missing from the list of countries where the sanctioned individuals are from is China, which warned just hours before the UK’s announcement that “Britain will have to bear the consequences if it treats China as a hostile country”. Although this was said in reaction to the UK’s possible move to restrict Huawei’s access to the country’s domestic market and following similar threats in response to London’s flirtation with granting residency to anti-government individuals from Hong Kong, the timing might not be coincidental.

It wasn’t a secret that the UK was considering so-called “humanitarian sanctions” after it passed the “Magnitsky Amendment” in 2018, but it had hitherto been unclear exactly who it would target. The ever-intensifying New Cold War between the US and China that entered an unprecedentedly fierce stage since the start of the year made it reasonable enough to assume that some Chinese officials might have been on the list seeing as how Britain’s “big brother” from “across the pond” is targeting some of them in Hong Kong and Xinjiang.

The UK, at least at this point in time, knows better than to “poke the dragon” due to these two countries’ very close economic ties, but it can’t be guaranteed that it won’t one day “cross the Rubicon” by targeting Chinese officials in order to please its new American patron. It would likely only do so in the scenario that the US offers it some tangible economic incentives to cushion the damage from any reciprocal Chinese moves, which might be exactly what CIA strategists are now plotting after London got the ball rolling with its recent sanctions.