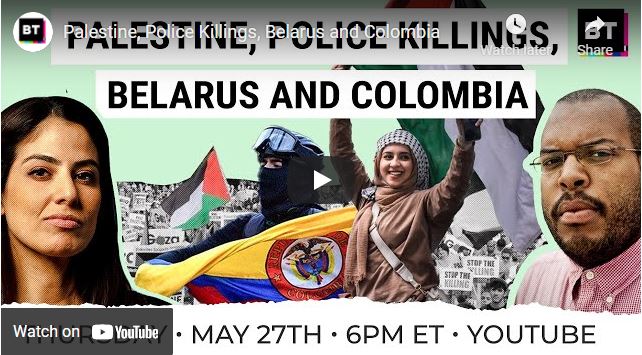 “It’ll be interesting to see with this wind down of the war in Afghanistan, there’s a lot of equipment that is being taken back. We know with the 1099 program that a lot of that weaponry ends up in the hands of these small town police dept.” @RaniaKhalek

“The only COVID-19 clinic in Gaza was bombed. People’s family homes were destroyed in airstrikes. You have to think about the aftermath of that in a place like Gaza where they can’t even get the proper building materials they need.” @RaniaKhalek

“Gaza has been under air, land, and sea blockade for the last 15 years. That continues after all the devastation of Israel’s bombardment on top of killing 66 children.” @RaniaKhalek

“We’ve had a ceasefire that’s been in place, which is a very good thing. In the aftermath, as the story is starting to disappear from the headlines, the suffering continues. There aren’t bombs falling but there’s still a seige on Gaza.” @RaniaKhalek

“The reason the ADL would be advising the NBA is to get in the way of players taking a stand against Israel for Palestine.” @RaniaKhalek

“My theory is that there has been a lot of activism among athletes, in particular Black athletes with taking a knee. In the past couple decades there’s been quite a bit of activism with socially aware activists getting good on Palestine.” @RaniaKhalek

“Why does the NBA need to be advised by a pro-Israel lobby on how not to hate people?” @RaniaKhalek

Live Edition Of The Unauthorized Disclosure Weekly Podcast – May 26