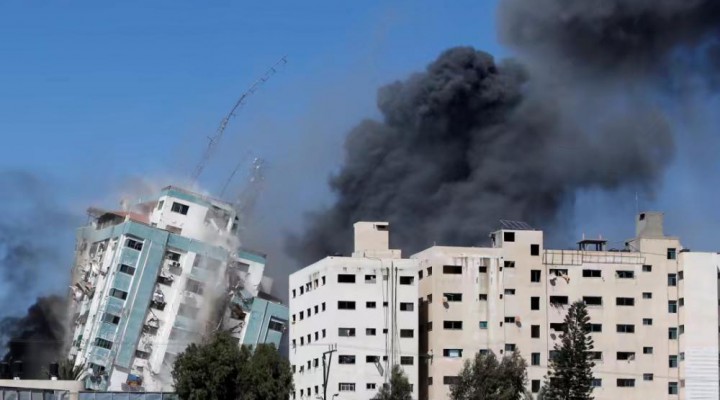 The purpose of US Secretary of State Anthony Blinken’s current Middle East tour is to rob the Palestinians of their victory in their 11-day confrontation with Israel and undermine their re-found unity under the guise of strengthening the cease-fire and rebuilding the Gaza Strip.

Blinken made this plain at his joint press conference with Israeli Prime Minister Benjamin Netanyahu. He reiterated the US commitment to Israel’s right to self-defence and determination to prevent Hamas and other resistance groups from using financial and reconstruction aid to rebuild their military infrastructure.

The money is to come from the signatories of the ‘Abraham Accords’ along with Saudi Arabia and Qatar. Its expenditure will be scrupulously monitored by the intelligence agencies of Egypt, the Palestinian Authority and Jordan to ensure that not a single bag of cement or steel rod can be used to repair any Hamas tunnel or weapons store damaged by Israeli bombing.

Hamas and the other resistance groups, having humiliated the Israeli occupying power and forced it to retreat, will not be allowed any role in the reconstruction of the territory they govern and where they hold political sway.

The Biden administration did not rush its chief diplomat to the Middle East to save the Gaza Strip and its inhabitants from Israeli war crimes. It is only interested in protecting Israel from the homemade rockets of the Palestinian resistance, resupplying it with advanced munitions, sparing it from civil war as Palestinians rise up in both the 1948 areas and the West Bank, and ensuring they cannot acquire arms. Washington is rallying all its allies in the region and their intelligence agencies to achieve these tasks, for a sprinkling of financial aid in return.

That is the deal being touted by Blinken: Israeli warplanes wreak death and destruction, killing 252 people including 66 children. Arab Gulf rulers pick up the tab for these crimes and the subsequent reconstruction. And the aggressor need not pay a single dollar from its own pocket in compensation.

The Palestinian resistance groups don’t have to submit to this contemptuous treatment, especially not after having succeeded in changing the rules of engagement with the occupying power. The hard-right administration of Donald Trump was forced to sit down and talk with the ‘terrorist’ Taliban after US losses in Afghanistan became too costly to withstand. Why can’t a ‘liberal’ administration talk to Hamas in occupied Palestine, which it brands as ‘terrorist’ though it has never killed a single American or European? Why this hypocrisy, double standard and contempt towards Arabs –resisters, clients, bankrollers and go-betweens alike?

Palestinians won’t swallow this fake and demeaning ‘reconstruction’ offer and the toxic process it is designed to launch. They haven’t forgotten how a former US president convened a conference at Sharm al-Sheikh after the previous Israeli assault on Gaza in 2014. He solicited $5 billion in pledges of reconstruction aid. But after the goal of the conference was achieved – the restoration of calm — not a single dollar was paid up. Most of the 86,000 homes destroyed in that assault were never rebuilt. We must be wary of a repeat of this scenario.

The latest ‘reconstruction’ offer must be rejected unless it is tied to a lifting of the blockade of the Gaza Strip and an end to further Israeli encroachments in Jerusalem, al-Aqsa and Sheikh Jarrah. Nobody was starved into submission by the fraudulent offers of the Sharm al-Sheikh conference, and nobody will be by the current ‘reconstruction’ rhetoric.