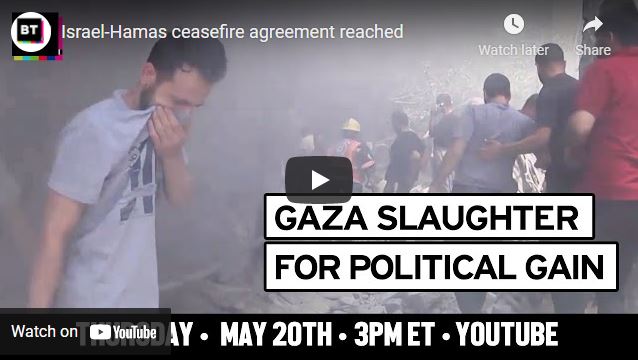 Netanyahu is attempted save his political career through slaughter in Palestine. As Gaza’s death toll rises ever higher, the once embattled leader is watching his popularity skyrocket in Israel.

Thank you to @sareemakdisi @Hind_Gaza @MikaelaNhondo  for joining our @BTnewsroom  stream today on Israel’s aggression in Gaza just as the ceasefire was announced.

“The level of dehumanization. This comparison of Palestinians to fleas is genocidal language.” @RaniaKhalek

“Israel has gotten so psychotic. As a country it’s so explicitly right-wing. There’s pogroms happening against Palestinian citizens of Israel. You can’t deny the Jim Crow apartheid in the West Bank. You can’t deny Gaza is an open air prison.” @RaniaKhalek

“Whenever I’ve covered the far-right in the US or in Europe, often the Israeli flag has become a symbol that they view as a really strong ethno-state that they want to be like in Europe, but white.” @RaniaKhalek

“The Israeli flag around the world has become a symbol of oppression and right-wing ethno chauvinism.” @RaniaKhalek