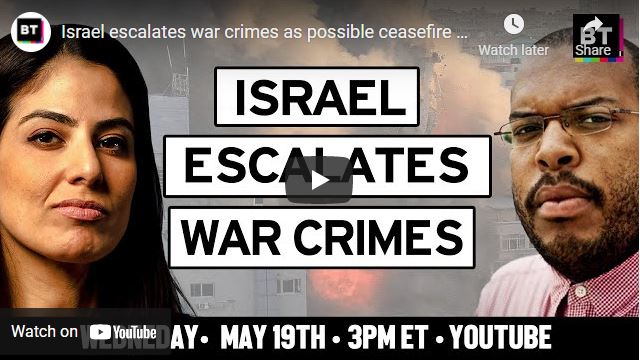 With growing international outrage Israel is ratcheting up its brutal bombardment of Gaza to inflict maximum damage before a potential ceasefire is implemented.

“We showed that Joe Biden clip where he said back in the 80s if there wasn’t an Israel, we’d need to invent an Israel because of how useful Israel is to US interests. He later said it’s the best 8 billion dollar investment we make a year. ” @RaniaKhalek

“There’s this kind of liberal attempt to make this issue about JUST Israel and Palestine. Israel is just a big bully state and we support them and as a result Palestinians are being oppressed. It’s so much more than that.” @RaniaKhalek

“What the root here that we are all talking about is really imperialism. It’s Western imperialism and that’s what draws all of this together. ” @RaniaKhalek

“I ended up moving in to writing about Palestine, but I still had this hunger to write about the racist police killings in America and still wanted to write about that. Ferguson really bridged that for me.” @RaniaKhalek

“I started journalism covering criminal justice issue, police shootings particularly. I also grew up in a Lebanese family and understood the struggle for Palestine because of my family’s background.” @RaniaKhalek

“I’m newly a part of the Breakthrough News team. I just joined in April and I have to say I could not be happier to be at this outlet right now. I can’t imagine anywhere else that we can be giving you this live coverage.” @RaniaKhalek

“Israel did what it is doing now, which is to target people in their homes. This is intentional.” @RaniaKhalek

“In the war in 2014, what Israel called operation protective edge, a 51 day bombing campaign against Gaza, over 500 children were killed. That included 142 families that were wiped out in whole or in part.” @RaniaKhalek

“Norwegian Refugee Council has a program that offers trauma counciling to children in Gaza and they are reporting that 11 children receiving counseling have been killed by Israeli bombings while they were sheltering in their homes.” @RaniaKhalek

“There are up to 15 Palestinians families in Gaza who’ve lost three or more members of their family. There has been an attempted wiping out of families with bombings of people in their homes essentially while they are sleeping.” @RaniaKhalek