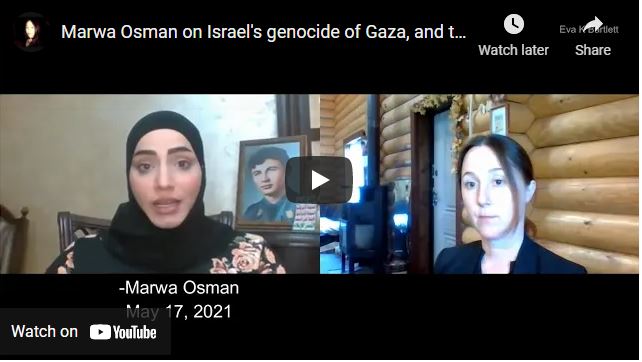 A very informative discussion with Beirut-based journalist and political analyst Marwa Osman, on the litany of Israeli crimes against Palestinians in Gaza during Israel’s horrifying bombardment of the besieged and densely inhabited Gaza Strip.

Marwa also speaks of the unity not only among Palestinian resistance groups, but also Resistance movements throughout the region.

“Myself as a Shia Muslim, I believe that when there are people who are oppressed, it’s not only my duty, but if I don’t help that people, then I’m complicit.

This ideology has surpassed the Shi’ism ideology and has passed to a pan-Arabism ideology, the same ideology Gamal Abdel Nasser used to reiterate and emphasize when he was president of Egypt. That pan-Arabism is now being mirrored at the different factions, the different resistance, the allied forces of the resistance across west Asia, from Sana’a to Maghreb, up to Baghdad to Mosul, to the border between Iraq and Syria, to Damascus, Aleppo, to Daraa, down to Quneitra, down to south Lebanon, not forgetting the Islamic republic of Iran. This is very important, and historic. What we are seeing is the same people that the Imperial powers, starting from WW2 to today, tried to dismantle, disintegrate, and break apart, they are coming all together to stand in the face of this cancer that was prepared for us in the late 1800s….”

0 thoughts on “Marwa Osman on Israel’s genocide of Gaza, and the new precedent of united regional Resistance”