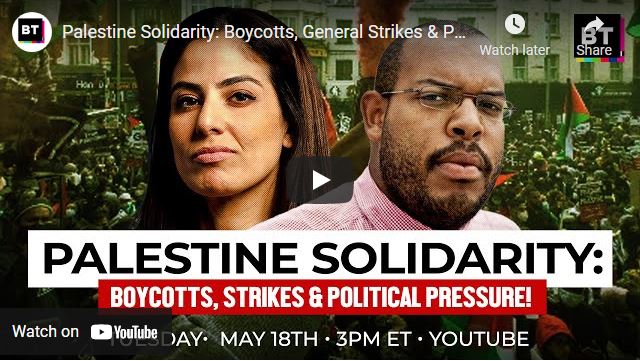 At the time of posting, 213 Palestinians have been killed by Israel in Gaza, including 61 children. When this latest round of atrocities ends, Israeli aggression against Palestine will continue unabated until the next mass bloodletting.

How can we work with the Palestinians to end this violence once and and for all?

“It should continued to be explained as often as possible why this is happening. This isn’t just a part of an escalation. This is a part of the ongoing destruction of Palestine because Israeli is a settler colonial state.” @RaniaKhalek

“Israel is a country that was founded on top of the land of another people. Israel was founded in 1948 through the pre-mediated ethnic cleansing of up to 750K Palestinians who were forcibly pushed out of their homes and replaced with Jews.” @RaniaKhalek