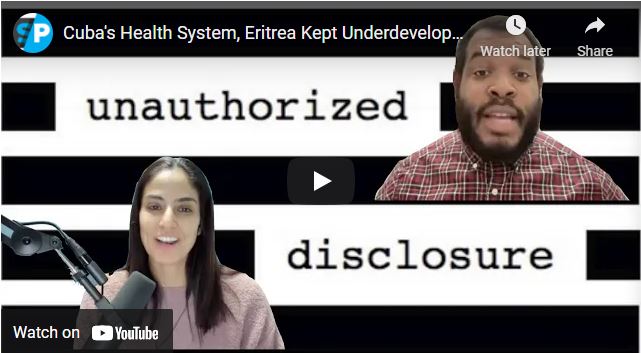 Rania Khalek, co-host and journalist for BreakThrough News, and guest Eugene Puryear, who is also a journalist with BTN, share what they observed on their trip Ethiopia and Eritrea in December 2021. Rania also discusses her trip to Cuba.

Rania and Eugene describe the Cuban health care system and how it helps to illustrate what the United States government could do for its people on a grander scale if public health was prioritized over corporate profits.

Later in the show, Eugene provides an overview of how Eritrea is kept underdeveloped by the US and the Western world. He and Rania recount what they found most striking about the country, and then the conversation pivots to Ethiopia, where the Tigray People’s Liberation Front (TPLF) has committed atrocities that Ethiopians told BTN about during their trip.

The show concludes with some riffing on State Department press secretary Ned Price, a tool who absolutely embarrassed himself when Associated Press reporter Matthew Lee challenged him to prove that Russia is planning to produce a propaganda video with “crisis actors” as “pretext” to invade Ukraine.

What’s it Like For a U.S. Citizen Studying Medicine in Cuba For Free?