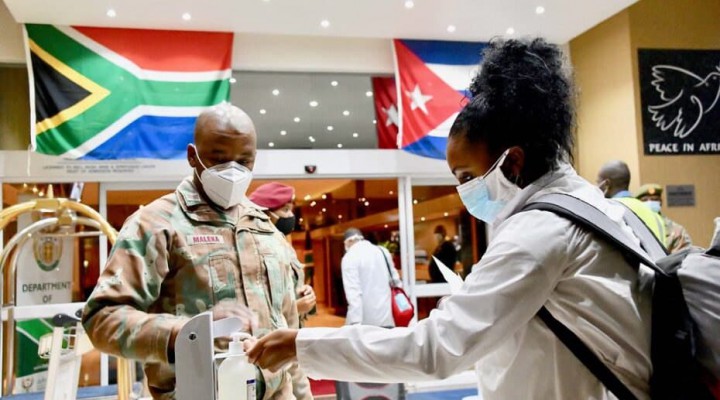 The inability of capitalist countries to provide equal access to healthcare is being challenged by Cuba – under blockade, boasting one of the best and most accessible healthcare systems.

There is no denying that the coronavirus pandemic has catapulted Cuba onto the world stage. A comprehensive approach at home, based upon the country’s emphasis upon education and healthcare access, has ensured nationwide care for Cubans while clinical trials are underway for the country’s production of vaccines – the only country in Latin America and the Caribbean to accomplish such a feat.

Meanwhile, Cuba has also been at the helm of medical internationalism since the start of the pandemic, with the Henry Reeves Brigade offering medical assistance in several countries, including Italy.

At the 46th session of the UN Human Rights Council, Cuban Foreign Minister Bruno Rodriguez called for internationalising medical cooperation, calling out the neoliberal model practiced globally as the cause of social and economic crises exacerbated during the pandemic.

“Privileging narrow interests over the general welfare will increase suffering and deaths, even in industrialised countries. The internationalization of cooperation is urgently needed. It is necessary to fight for the establishment of a just, democratic and equitable international order,” Rodriguez declared.

Governments worldwide have come under sharp criticism for the mishandling of Covid19. Recently, a spat between AstraZeneca and the EU made news when the company announced it would not be able to meet the stipulated supply of vaccines by the required deadline. The EU has been accused of vaccine hoarding since January, when it bought 300 million doses from Pfizer.

Meanwhile many countries in Latin America, Asia and Africa have been left with meagre access. In Palestine, where access to vaccines has been extremely limited due to Israel’s initial refusal to cooperate, the Palestinian Authority has angered the population upon admitting its first batch of vaccines went to privileged individuals rather than the most vulnerable and front-line workers.

On the other hand, Cuba, which has faced almost six decades of the illegal US blockade on the island, is calling for political change both in terms of global cooperation. The blockade, as Rodriguez pointed out, has not deterred Cuba from making inroads when it comes to the healthcare of its population and medical internationalism abroad. Despite ongoing US hostility, Cuba has announced it will be creating enough doses – 100 million – to immunise its population and provide marginalised countries with access to the vaccines, which are less expensive and easier to transport than the brands used in the Western world.

High income countries have purchased 60 percent of the available vaccines, with some countries purchasing in excess of what is necessary to vaccinate the population. Cuba – mostly forgotten by the world unless mainstream media can run a story about how the socialist-driven economy needs to shift to capitalism – is at the helm opposing such exploitation. The contradiction here is stark – the inability of capitalist countries to provide equal access to healthcare is being challenged by Cuba – under blockade, boasting one of the best and most accessible healthcare systems, and with the potential to address the gap in inequalities that rich countries have turned a blind eye to.

Not to mention that apart from nominating the Cuban medical brigades for the Nobel Peace Prize, there has been no concentrated international effort to confront the US about the illegal blockade imposed on the island. That Cuba has managed such a feat, up against US hostility and international complacence, is in itself an accomplishment that no other country with easier access to trade has managed.

It is activists worldwide that uphold the call for the blockade to end, even as governments worldwide reap the benefits of Cuba’s medical success, lament the Cuban revolution and do little other than vote in non-binding resolutions, with no recognition of how the principles of the revolution as early as 1953, before its triumph, paved the way for the long-standing position Cuba so rightly deserves in the field of education and healthcare.

0 thoughts on “Cuba – a Solitary Voice Against Global Inequality”