HOME / Multimedia / Inside Look at Afghanistan As US Withdraws, Taliban Gains & Media Panics 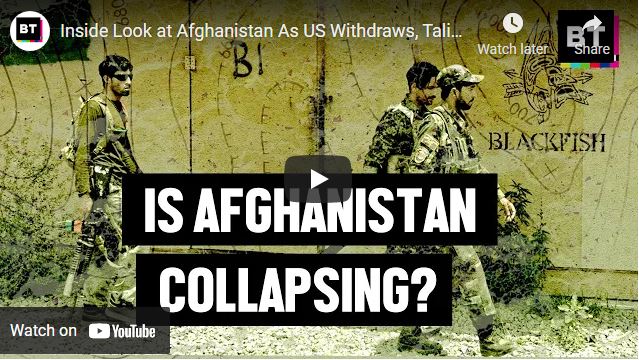 After seemingly forgetting Afghanistan for years, Western media has rediscovered it in time to provide panicked and hand-wringing coverage of the US-led coalition’s withdrawal, as well as the apparent rapid gains made by the Taliban.

Is the country on the verge of collapse? What will happen and what do Afghanistan’s people want?

To help make sense of this, Rania Khalek is joined by Obaidullah Baheer, a lecturer at the American University of Afghanistan and Kardan on peace and conflict resolution-related subjects. He is also an expert on negotiations with the Taliban and a prolific writer.

1:14 Is Afghanistan collapsing? Is the Taliban taking over?
4:37 The US negotiated a horrendous deal for Afghanistan
7:53 Is it true that the Afghan army is collapsing?
11:20 Is there a political and military division within the Taliban?
14:13 Does the Taliban want to seize control of Kabul and the rest of Afghanistan?
18:29 Does the Taliban have a vision for governance and do they have the ability to govern?
20:38 Militias being formed to fight the Taliban
23:17 Is there potential for Afghans to lose confidence in the government and turn to ethnic militias?
25:42 Is the Taliban hostile to Shias?
27:57 Has Pakistan lost influence over the Taliban?
30:30 What would it take to get to a unified and stable Afghanistan?
31:34 Is there a positive role to be played by neighbors such as Iran, China, or Russia?
33:54 How has Afghanistan changed since 2001?
38:40 Is Obaidullah worried about his own safety as a teacher?
40:25 Reacting to American generals who think US should stay

0 thoughts on “Inside Look at Afghanistan As US Withdraws, Taliban Gains & Media Panics”