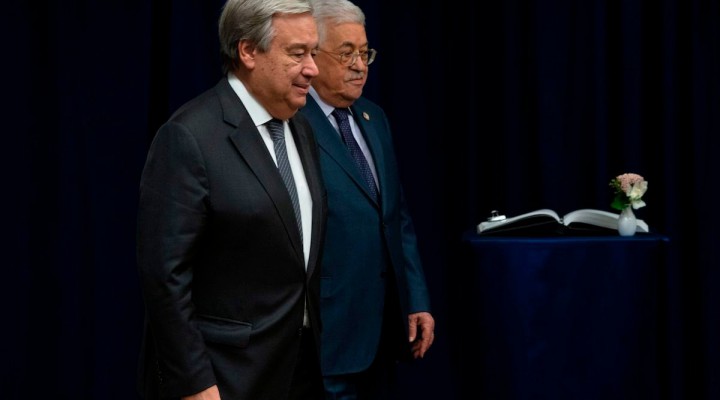 “There is no Plan B.” UN Secretary-General Antonio Guterres’ favourite catchphrase wormed its way into his address at the opening session of the UN Committee on the Exercise of the Inalienable Rights of the Palestinian People. His speech was a reminder that, despite all talk of independence and rights, Palestinians will remain subjugated to the 1947 Partition Plan, which was instrumental in denying them their land.

The Committee was founded in November 1975, purportedly because the UN General Assembly was concerned about the prolonged process of reaching a resolution. It is mandated to “consider and recommend to the General Assembly a programme of implementation, designed to enable the Palestinian people to exercise the rights” which include self-determination, the right to national independence and sovereignty, and the Palestinian right of return to their homes.

With the 1947 Partition Plan, however, the Palestinian people’s inalienable rights became diplomatic rhetoric which Palestinians were expected to accommodate. So, while the UN resolution which brought the Committee into being pretended to give autonomy of political thoughts, it is beholden to Israeli colonisation and UN complicity.

Guterres could not have made himself clearer on this. “The promise of the independence of the Palestinian state remains unfulfilled,” he stated. And to ensure it will never be fulfilled, Guterres once again ruled out any alternative – notably decolonisation. On the contrary, Guterres said he was “encouraged by recent engagement between senior Israeli and Palestinian officials” – talks which were based upon promoting and strengthening security coordination while ensuring the Palestinian Authority retains its grip over the occupied West Bank. Briefly, Guterres is encouraged by the cycle that prevents Palestinian self-determination, independence and the right of return, because the PA stands for neither, just like Israel.

“Piecemeal approaches to the question of Palestine will only ensure that the underlying issues perpetuating the conflict remain unaddressed,” Guterres declared. If he were to be held accountable for his speech, the UN itself would be in the crosshairs for applying a piecemeal approach. On one hand Israel is colonising what remains of Palestinian land with utter impunity. Meanwhile, the UN’s approach is to intensify the humanitarian paradigm, which addresses slivers of colonial consequences without attributing accountability for the perpetrator. Hence the call for increasing funding to the UN Relief and Works Agency for Palestine Refugees (UNRWA), because burdening UNRWA with the issue of humanitarian provision allows the international community to maintain the farce of committees allegedly promoting Palestinian independence. Indeed, the UN has accomplished the task of going against its declarations to eradicate colonisation at the expense of the Palestinian people.

Palestine has been ravaged by such an approach. If the UN, including the Committee on the Inalienable Rights of the Palestinian People, tackled the issue of Zionist colonisation which is the underlying issue, then Guterres would have no other option but to call for Plan B in accordance with Palestinian demands. Then, perhaps, the Committee would be able to fulfil its mandate, if the 1947 Partition Plan is recognised for its fraud.