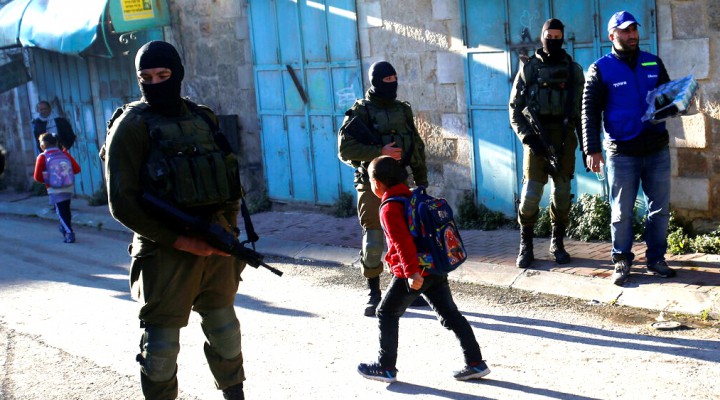 Notwithstanding the ample evidence of Israel’s war crimes and international law violations, the UN remains complicit, adopting Israel’s tactics of oblivion by promoting its security narrative.

Israel relies heavily on manipulating its image in order to prove its morality. The slightest exposure of international law and human rights violations brings the Jewish state close to a point of political reckoning, which has been staved off only because of the international community’s complicity in maintaining Israeli impunity.

In 2007, a video recorded by a Palestinian civilian paved the way for the Israeli human rights organization B’Tselem to start The Camera Project. Its theme, “Shooting Back,” is symbolic of meeting Israel’s weaponry with cameras. B’Tselem provided cameras for Palestinian civilians to record settlers’ and soldiers’ attacks, thus bringing the narrative of the oppressed to the helm.

“Shooting Back,” is symbolic of meeting Israel’s weaponry with cameras.

“The video puts you in the Palestinians’ shoes, instead of in the shoes of Israeli or foreign cameramen, which is how you usually see what goes on in the occupation,” the then Camera Project Director Yoav Gross stated. Palestinian volunteers with the B’Tselem human rights organization learn how to use video cameras to document the actions of the IDF and Israeli settlers in the West Bank, in 2014. (B’Tselem)

Liat Berdugo, an artist and author who writes about militarization in relation to capitalism, and the Middle East, among other subjects, carried out an extensive study on the implications of B’Tselem’s exposure of Israel’s attacks on Palestinians observes how Israel deems the exposure of its forces and settlers’ heinous acts to be more serious than the human rights violations themselves.

For Israel, exposure of its crimes opens a different assortment of problems, not the least of which is associating individuals with specific war criminality and violence. As long as Israel can protect its image and the narrative that sustains it, a veneer of safety for the perpetrators is assumed.

The Israel Defense Forces (IDF) are often able to get away with aggression because of their collective image as purportedly “the most moral army” in the world. However, when the focus shifts to individual acts, the perception is altered because of the ability to identify individuals associated with violations that are committed under the auspices of Israel and the IDF.

The Palestinian people’s capturing of Israeli military and settler brutality is a political act that requires attention. Since 2016, B’Tselem publicly recognized that its cooperation with Israel’s military law enforcement failed to bring justice to Palestinians and inadvertently turned its activism into subcontracted activity.

This resulted in the organization releasing a statement that it will continue documenting human rights breaches but no longer submit any reports to Israeli military lawyers. It is a step forward that protects the Palestinian people’s narratives, although limited in what it can achieve against the powerful Israeli state.

Documenting imagery on its own is limited in scope, but it provides the foundations upon which to act. In B’Tselem’s case, refusal to cooperate with Israeli institutions is both an act of defiance from within and an expression of the will to shield the colonized. Both actions come from the privilege of B’Tselem being Israeli, even though the organization has faced Israel’s wrath over its apartheid designation in 2021.

If the UN and its institutions were not so deeply invested in protecting Israel, the available imagery can be used to accurately disseminate the Palestinian people’s lives under colonization. Instead of using documented proof to expose Israel’s international law violations, thus setting the record straight on the burden of accountability, the UN mirrors Israel’s psyche by normalizing its international law abuses to lessen the impact of shame for the settler-colonial state.

The UN mirrors Israel’s psyche by normalizing its international law abuses to lessen the impact of shame.

There are examples that stand out in Israel’s violence against the Palestinian population, which, despite the visibility of its cruelty in statistical reports, the UN still failed to act against. During Operation Cast Lead, from December 2008 until January 2009, Israel used white phosphorus munitions over civilian areas in Gaza, which is prohibited in international law.

The Great Return March, which started in March 2018, was another display of the IDF’s extrajudicial killing of Palestinians demonstrating at the Gaza border. Gaza’s health ministry placed the death toll at 266, while 30,000 Palestinians were injured, many suffering permanent disability as the IDF’s snipers aimed at the protestors’ legs.

On both occasions, mainstream media outlets gave ample coverage of these violations, while the accessibility of social media, particularly in recent years, enabled the entire world to gain live footage of Israel’s atrocities. Yet the UN preferred to reiterate its partiality to Israel’s security narrative, leaving human rights to be dealt with in the aftermath, with the usual impunity.

Like Israel, the UN prefers to shift focus away from blame. Exposure on its own is harmless to Israel, particularly since it has forged ties with the entire international community and enjoys diplomatic standing as an unacknowledged colonial power.

However, when the ICC declared Israel’s settlement expansion a war crime, the UN stayed silent while Israel attempted to maneuver diplomats and public opinion into supporting its stance that the investigation was a political act.

The UN and world leaders could have opted to alter their language when speaking about settlement expansion.

The UN and world leaders could have opted to alter their language when speaking about settlement expansion, to illustrate cohesion in applying and adhering to international law. Instead, they chose to maintain relations with Israel and cement complicity with colonial violence. Consequently, the international community imparted a dangerous message by refusing the opportunity to differentiate between legitimate defense and war crimes.

Now that the UN has commissioned an open-ended inquiry into Israel’s war crimes departing from May 2021 when the IDF yet again battered Gaza with bombs, which narrative will the UN be availing itself of? Calling out war crimes while maintaining Israel’s security narrative will give Israel a platform from which it can avail itself of further immunity to commit additional war criminalities against the Palestinian population.

Will the UN allow Israel a platform to pontificate about its atrocities while normalizing them further? Even if Israel has found a way to dissociate itself from its human rights violations, thus distancing itself from culpability, the UN should not be following suit. Mirroring Israel and promoting oblivion is only an answer for the settler-colonial enterprise – a tactic that allows complete impunity for war crimes and international law desecrations.