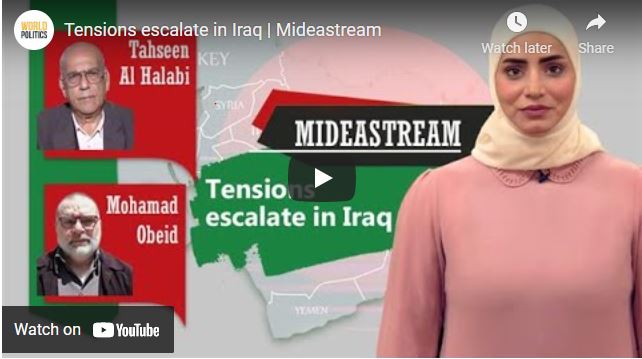 The pace of escalation is rising day after day against American interests in Iraq, at a time when Mustafa Al-Kadhemi’s government is preparing to enter the fourth round of the strategic dialogue, which will discuss a complete withdrawal of the American occupation forces, instead of scheduling the withdrawal, as agreed upon in the third round held last April. This shift in the Iraqi position came in light of the exchange of fire between the American occupation and the resistance factions, which began in June, when an American raid targeted a camp belonging to the Had Shaabi on the border strip between Syria and Iraq. Meanwhile, the American embassy in Baghdad was then targeted hours after American interests in western Iraq and others in neighboring Syria were similarly bombed.

To discuss this issue with us from Beirut is Mohamad Obeid, political commentator.

A fighter, this is how Ahmad Jibril spent his stormy life, witnessing the smallest details of the Palestinian Struggle, ever since the Zionist gangs of the first settlers uprooted the pillars of his family home in the village of Yazur near Jaffa in 1948 when he was just 10 years old. Since then, Jibril finally chose to cover his face with the dust of Damascus, after he had discovered the secrets of geography between the Palestine Sea and the Levant interior, and learned the language of the water flowing towards the south, with bullets and longing to return to the basil and lemon gardens in Yazour. Jibril was laid to rest in his beloved Damascus last week after decades of struggle for liberation that seems today closer than ever because of the thoughts and activism of the likes of late Ahmad Jibril.

To discuss this issue with us from Damascus is Tahseen Al Halabi, political commentator.