HOME / WORLD / Biden’s UNGA Speech Does Not Absolve the U.S. of Violence 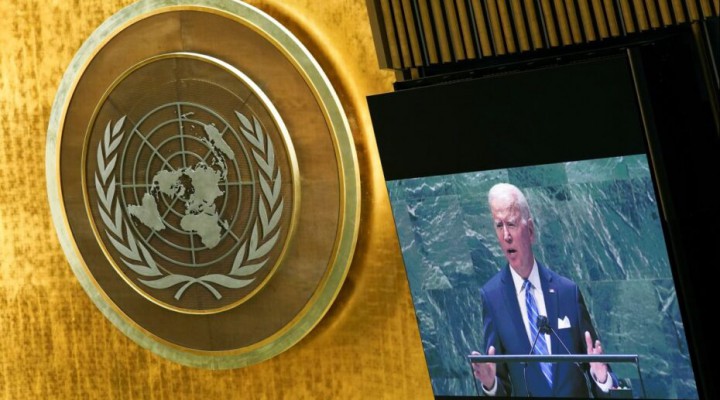 How has the U.S. changed, when it is still advocating for violence and determining which countries are worthy of U.S. support, based upon subservience to imperialism?

U.S. President Joe Biden’s speech made a big deal of portraying his administration as different from that of his predecessor. But apart from rejoining and engaging with UN institutions, there is little to account for a change in U.S. foreign policy. Running contradictory statements, particularly around the U.S. terror narrative and military violence, is not the way to convince an audience, particularly countries which have been targeted by U.S. intervention.

Biden’s speech attempted to portray the U.S. in a new light, away from its bloody legacy of supporting coups and intervention. The humanitarian approach to Covid19 is one tactic which Biden utilized to assert a departure from the Trump Administration, as was the environmental card played in the speech.

However, the U.S. has not altered its policies and much less its tactics. Democracy as designated by powerful countries allows leaders to monopolise the narrative, but its implementation will always be far from the rhetoric.

“We’ll stand up for our allies and our friends and oppose attempts by stronger countries to dominate weaker ones, whether through changes to territory by force, economic coercion, technological exploitation or disinformation,” Biden claimed. If you ask Palestine and Cuba, a different picture emerges.

Biden’s mention of the two-state compromise contradicts his assertion that the U.S. will oppose domination – the defunct hypothesis due to Israeli colonization of Palestinian territory makes a Palestinian state impossible. Not to mention the military aid bequeathed to Israel by the U.S. annually, while Palestinians are cloistered into the humanitarian paradigm and their political rights permanently dismissed.

On Cuba, Biden was not particularly vocal, drawing criticism from Miami, where the recent protests on the island were eagerly followed and with isolated requests for U.S. military intervention. Cuba was briefly mentioned alongside Belarus, Burma, Syria and Venezuela to sustain the narrative that the protests in Cuba were fueled by democratic aspirations, rather than orchestrated U.S. involvement.

Cuba’s Foreign Minister Bruno Rodriguez succinctly described Biden’s approach. “President Biden’s administration is making a serious mistake, with consequences for all, in its effort to split the world between those who submit to it and those who defend their sovereign right to self-determination with dignity,” he stated.

Biden has not prioritized Cuba on the U.S. foreign policy agenda, and certainly is not following in Obama’s footsteps, when rapprochement between the two countries was a possibility following the release of the Cuban Five. However, the greatest mistake in analyzing Biden’s approach was to equate the lack of visibility in terms of diplomatic engagement with Cuba to non-involvement.

As it became clear that Biden would not reverse the Trump Administration’s policies, it was evident that the U.S. would utilize the groundwork laid by former U.S. President Donald Trump. The refusal to remove Cuba from the U.S. list of state sponsors of terrorism allowed the Biden administration to extend the decades-long policy of “bringing democracy” to the island, as well as substantiate the refusal to lift the illegal blockade on the island, which the U.S. General Assembly has repeatedly declared to be in violation of international law.

Biden also affirmed the U.S. allegiance to Article 5 of the North Atlantic Treaty Organization (NATO) which stipulates that an attack on one NATO member state constitutes an attack on all member states, and which was instrumental in influencing global approval for the U.S. “War on Terror”. For all the declarations that the U.S. has evolved since September 2001, its agenda remains the same.

So how has the U.S. changed, when it is still advocating for violence and determining which countries are worthy of U.S. support, based upon subservience to imperialism? Covert action does not indicate a change in foreign policy, only in the way it is administered.

0 thoughts on “Biden’s UNGA Speech Does Not Absolve the U.S. of Violence”